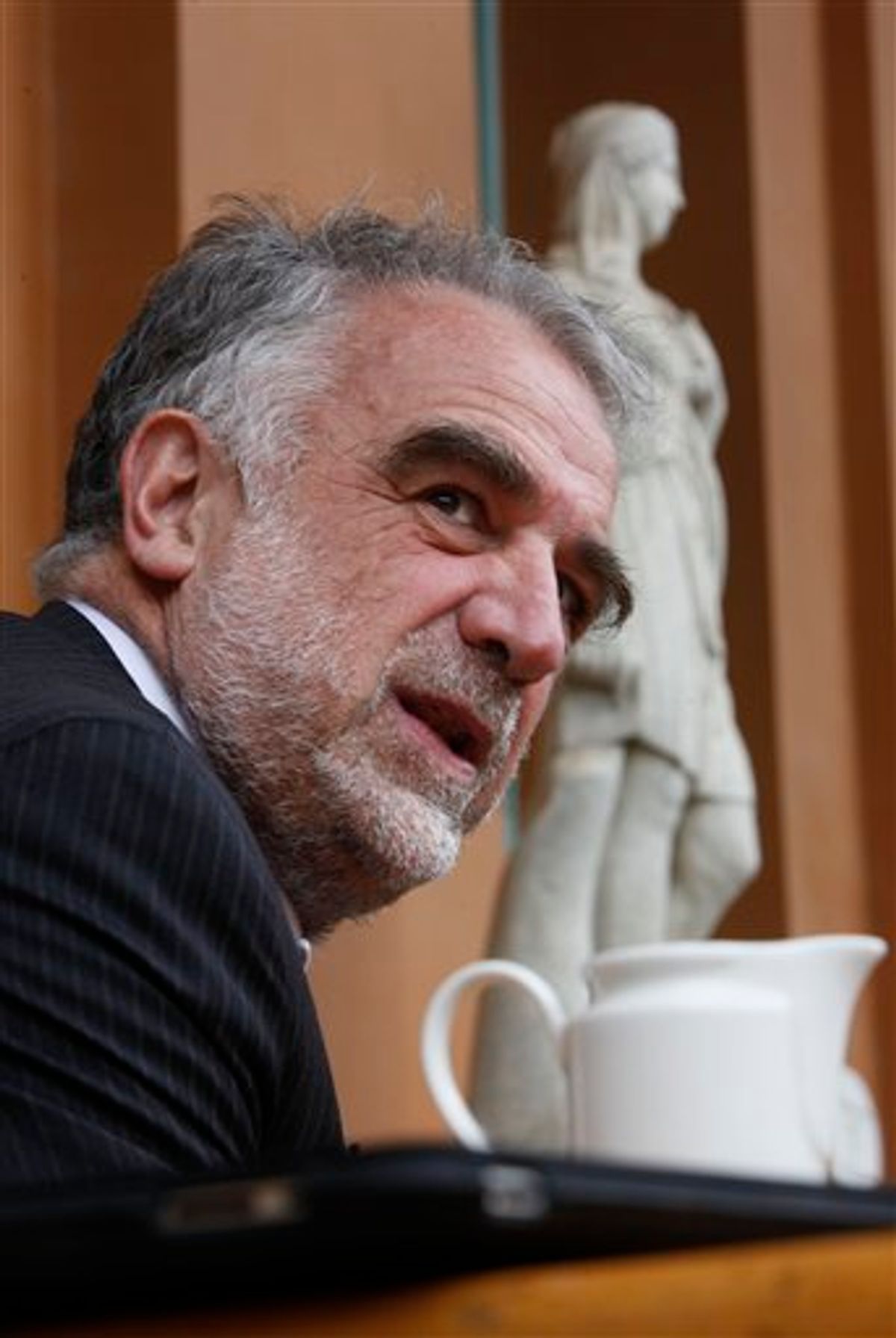 Luis Moreno Ocampo, the Prosecutor of the International Criminal Court (ICC) , talks during in interview with the Associated Press in Cairo, Egypt, Thursday, March 24, 2011. Ocampo says that he is "100 percent" certain that his investigation will lead to charges of crimes against humanity against the Libyan regime of Moammar Gadhafi. (AP Photo/Amr Nabil) (AP)
--

The International Criminal Court's prosecutor said Thursday he is "100 percent" certain that his investigation into attacks on Libyan protesters will lead to crimes against humanity charges against the regime of Libyan ruler Moammar Gadhafi.

Gadhafi's crackdown on anti-regime protests that broke out last month has been the most violent against any of the anti-government uprisings across the Middle East.

Since the Libyan uprising broke out last month, Gadhafi's regime has faced international sanctions and a United Nations-authorized no-fly zone and bombing campaign against his forces. Libyan rebels still hold much of the country's western coastal strip, including their de facto capital in Benghazi. But they have so far failed to make new gains.

The court's investigation makes it likely that Gadhafi's regime will face additional censure, even if it retains power.

Court prosecutor Luis Moreno-Ocampo told The Associated Press on Thursday during a one-day visit to Cairo that he is "100 percent" certain his investigation will lead to charges of crimes against humanity against members of the Gadhafi regime.

Moreno-Ocampo said his team is looking into six incidents of "massive shooting of civilians" by security forces in Tripoli, Benghazi and other Libyan cities.

His team is working with a number of national police forces and Interpol to collect videos, photos and other evidence to determine who participated in and ordered the attacks, he said.

A later investigation will examine the regime's actions during the armed conflict with rebels.

In May, Moreno-Ocampo will present his findings to the United Nations Security Council, which instructed the court to investigate in a unanimous decision on Feb. 26. Since the world's first permanent war crimes tribunal has no police force of its own, the Security Council will likely play a role in having suspects arrested.

Moreno-Ocampo said that soon after, he'll present his case to the international court's judge, who will decide if the case will proceed.

The investigation was launched with unprecedented speed, which the prosecutor attributed to technology, which has brought images of Libyan violence to the world.

"Technology is reducing the distance between people in Libya and people in the (rest of the) world," the Argentine prosecutor said. "Journalists showing the killing of civilians in Libya created this willingness to intervene."

"Gadhafi's personality helped unite the world against him," he said, while insisting that he would remain impartial.

"I have to protect his rights," he said. "We don't care about personalities."