As the bombing continues, the Obama administration steps up the spin campaign at home 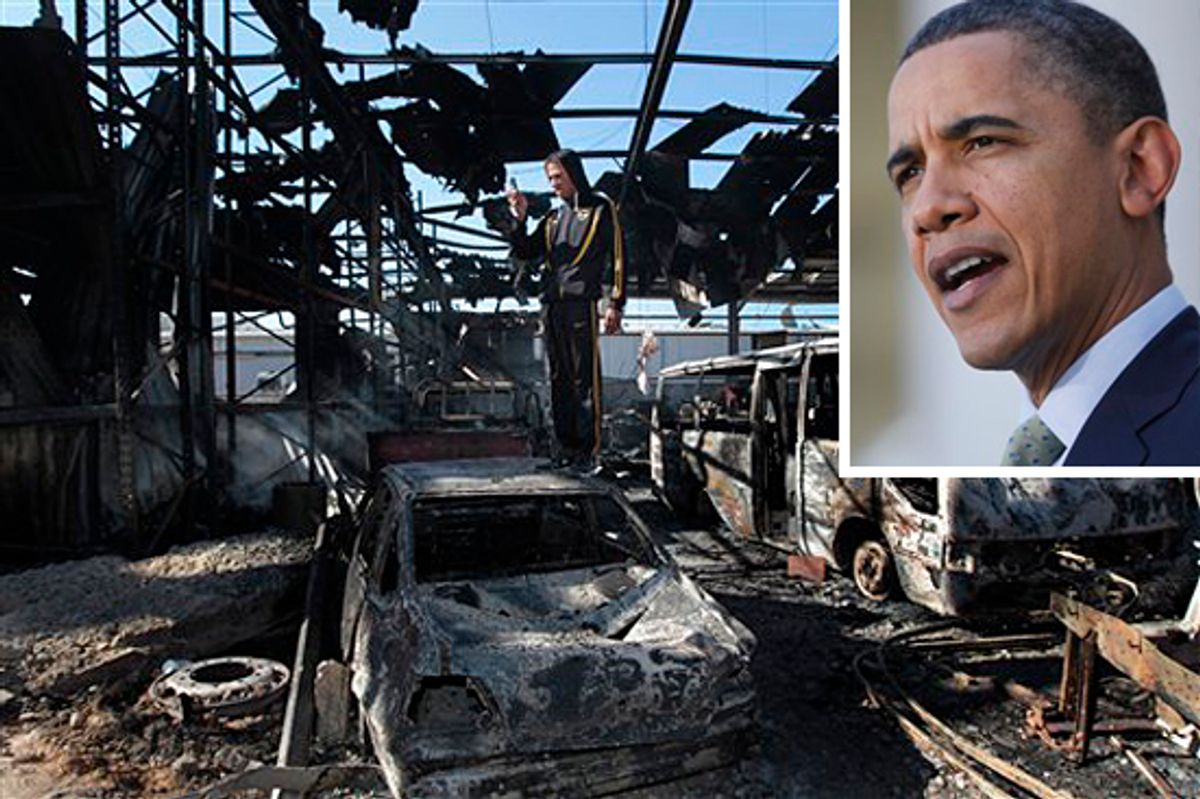 In this image taken during an organized trip by the Libyan authorities, A Libyan soldier in civilian clothes takes a picture amidst the wreckage of what was described as a maintenance warehouse hit by two missiles Monday evening on a Naval base in Tripoli, Libya, Tuesday March 22, 2011. Missile transporters and launchers were among the destroyed hardware. A senior defense official, speaking on condition of anonymity to discuss classified data, said Monday that the attacks thus far had reduced Libya's air defense capabilities by more than 50 percent (AP Photo/Jerome Delay) (Jerome Delay)
--

New wars have a way of generating heightened levels of spin and downright misinformation from the government. So it's no surprise that the Obama administration has been making some extremely dubious statements in recent days.

Spencer Ackerman has, for example, eviscerated the administration's ongoing refusal to call what's happening in Libya a "war." The administration has insisted on calling the bombing campaign either "a limited humanitarian intervention," or a period of "kinetic military action."

Then there were Obama's statements that the U.S. would be playing a "support" role as part of a broad international coalition when, in fact, the U.S. has been decisively in the lead of a tiny coalition. And then we got this in the New York Times today, describing a press briefing given by Adm. Gerard Hueber, chief of staff for Joint Task Force Odyssey Dawn:

Admiral Hueber also said that the coalition was communicating with rebel forces. But later, when he was pressed on whether the United States was telling rebels not to go down certain roads because there would be airstrikes there, he said he had misspoken. American military officials have said there are no “official communications” with the rebels, which remains a delicate issue. Contact with the rebels would reflect a direct American military intervention in the civil war of another country.

The transcript of the briefing shows Hueber at first saying that "we have told ... the opposition forces of how to maneuver" to avoid airstrikes. But later he backtracks and maintains that there has been no "official" communication with the rebels.

Now, the distinction between "official communication" and other types of communication is questionable to begin with. (Gen. Carter Ham, who is in command of the war, has insisted there is no "official communication.") But even more dubious is the idea that what is happening is anything other than "direct American military intervention in the civil war of another country." One can agree or disagree with the side we've taken or the decision to get involved. But there are two sides in the fighting in Libya. This, according to the most recent AP story, is what the U.S. and its allies are doing to one side:

French fighter jets struck an air base deep inside Libya and destroyed one of Moammar Gadhafi's planes Thursday, and NATO ships patrolled the coast to block the flow of arms and mercenaries. Other coalition bombers struck artillery, arms depots and parked helicopters.

Meanwhile, Obama has repeatedly said it's the official policy of the U.S. that Gadhafi, the leader of one side in the civil war, must step down. A coalition bomb was even dropped on his compound in Tripoli. This is a civil war, and the U.S. is on the side of the rebels.