Race, basketball and the Fab Five 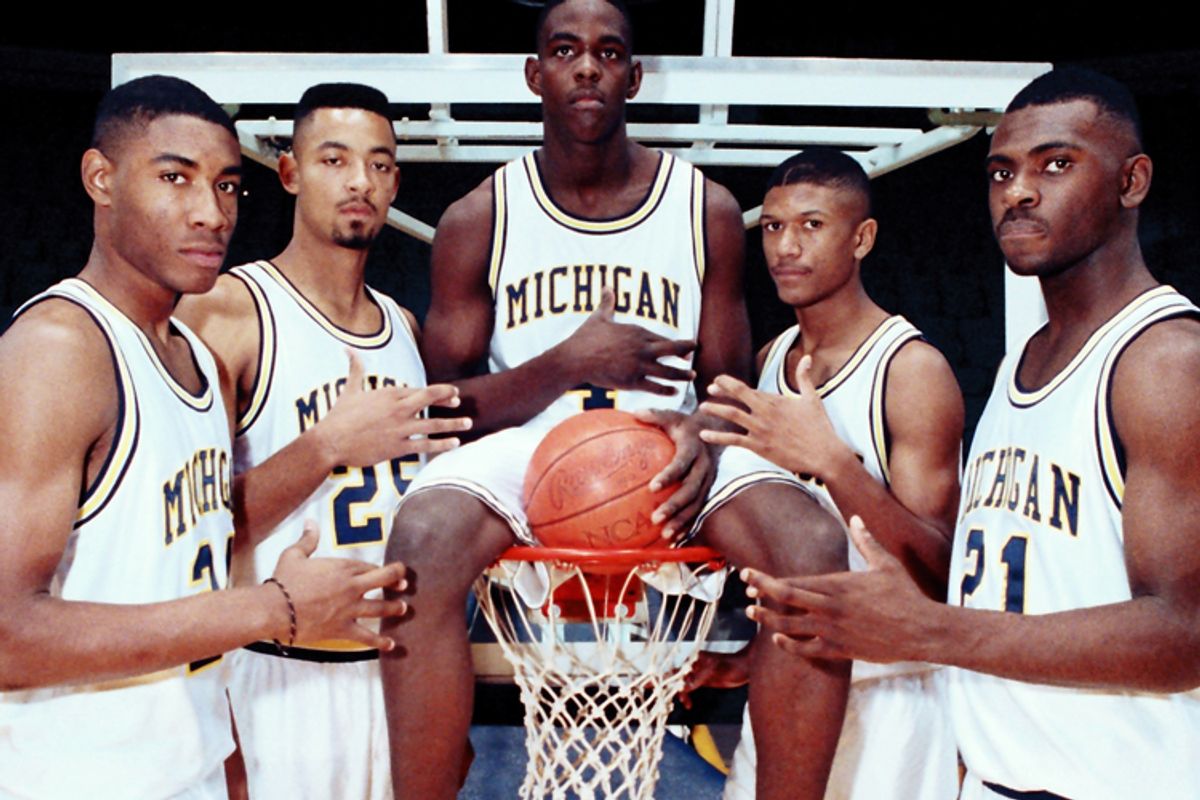 They don't call it "March Madness" for nothing. For good and ill, few sporting events arouse such widespread passion as the NCAA college basketball tournament.

Along with passion comes controversy. Orwell explained why in his wrongheaded essay "The Sporting Spirit." People play pickup games for fun, he argued, "but as soon as the question of prestige arises, as soon as you feel that you and some larger unit will be disgraced if you lose, the most savage combative instincts are aroused ..."

"Serious sport," Orwell thought, "has nothing to do with fair play. It is bound up with hatred, jealousy, boastfulness, disregard of all rules and sadistic pleasure in witnessing violence: in other words it is war minus the shooting."

Where Orwell went wrong was forgetting that "minus the shooting" is no small distinction. It's the biggest one in the world.

Anyway, welcome to the Sweet Sixteen. Most controversy's harmless, like my man Charles Barkley slamming the Big East conference as overrated -- something most fans residing more than 400 miles from New York City agree about. The league's inflated reputation is all about big city sportswriters and TV ratings. Eleven teams selected, nine gone by the second round. End of story.

Far less benign is the slanging match over the ESPN documentary "The Fab Five." Even Barkley's been uncharacteristically quiet. It's about race, class, personal authenticity and personal rivalries dating back 20 years. It's also about the emotional symbolism we attach to events that have the power to distort our perceptions.

So let's have at it. Here are my credentials: I've been a huge basketball fan since my days as a New Jersey high school player following the West Virginia Mountaineers -- an exotic-seeming place my pals and I visited on the radio.

Second, how I know I pulled for Michigan's Fab Five against Duke in the 1992 national championship game is that for me disliking Duke is like hating the New York Yankees. It's in my DNA.

Too bad Jalen Rose's isn't. Talking about the Duke-Michigan rivalry in the ESPN documentary he produced, Rose explained his feelings about former Duke (and Phoenix Suns) rival Grant Hill: "For me, Duke was personal. I hated Duke and I hated everything I felt Duke stood for. Schools like Duke didn't recruit players like me. I felt like they only recruited players who were Uncle Toms."

In context, Rose was talking historically: Not what he thinks today, but what he thought as an inexperienced 18-year-old from the Detroit streets. Alas, that's implied, never stated. He basically describes Hill as an inauthentic sellout and a suck-up to The Man.

No doubt that's exactly what Rose and his Michigan teammates thought at age 20. They also called Hill and (white) Duke teammate Christian Laettner a "bitch," "soft," "overrated" and a coarse synonym for sissy.

In the film, Rose acknowledged underestimating Laettner, but not Hill. In their inexperience, the Fab Five appear to have imagined white jocks like Laettner and Hurley would fold in the face of black aggression. They were defending National Champions at the time.

Hill, the son of NFL star Calvin Hill, hit back in a pungent letter to the New York Times. He called the Uncle Tom label "insulting and ignorant" to him and his black teammates. He urged his former rivals "to avoid stereotyping me and others they do not know in much the same way so many people stereotyped them back then for their appearance and swagger."

Hill concluded: "I am proud of my Duke championships and all my Duke teammates. And, I am proud I never lost a game against the Fab Five."

Something Hill got wrong, however, is that Rose never insulted his family.

"I was jealous of Grant Hill," he'd explained poignantly. "He came from a great black family. Congratulations ... I was upset and bitter that my mom had to bust her hump for twenty-plus years. I was bitter that I had a professional athlete that was my father that I didn't know. I resented that, more so than I resented [Hill]. I looked at it as 'They are who the world accepts and we are who the world hates.'"

That stings too. For an encore, maybe the two men should sit down in front of a camera and talk about it.