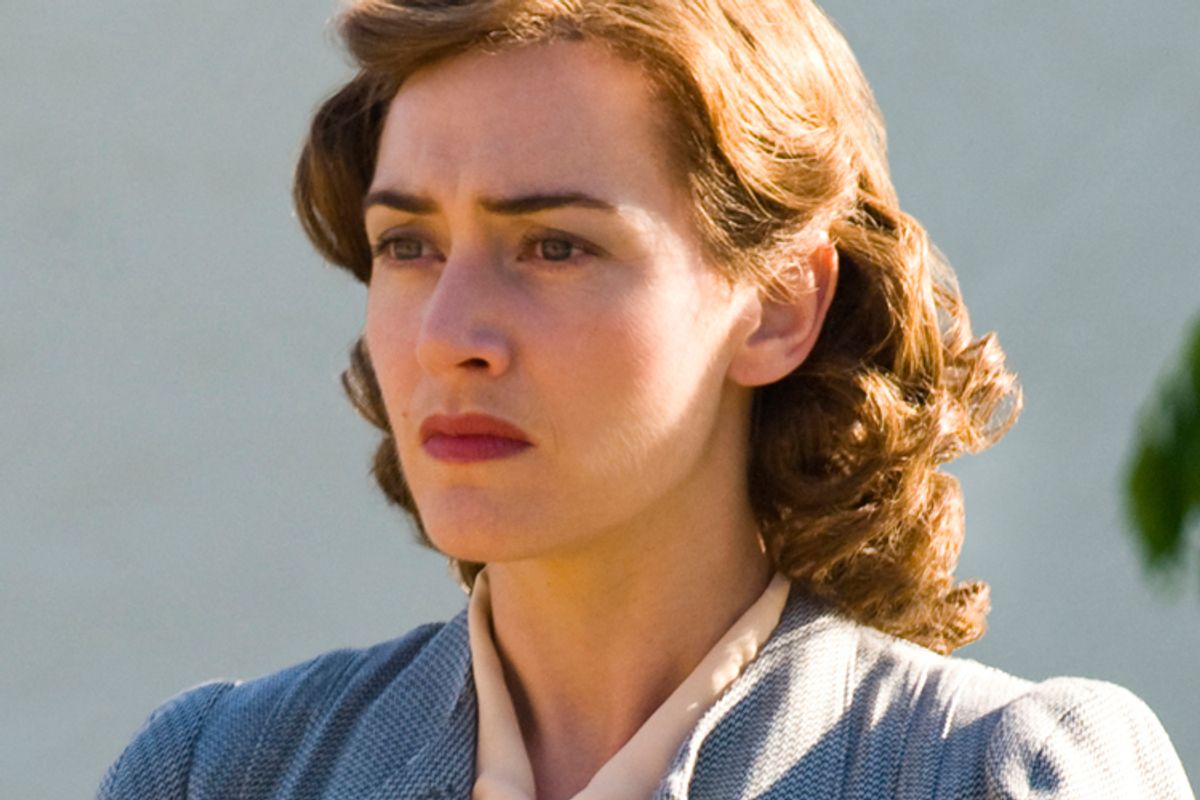 Kate Winslet as the title character of "Mildred Pierce."
--

"Mildred Pierce" is a masterpiece. I say that with some surprise, because I went into this five-part, limited-run HBO series skeptical of the channel's motivation for making it (Period costumes! Kate Winslet! Emmy bait!) and resisting the appeal of its director, Todd Haynes ("Safe,""Far From Heaven"), a filmmaker whose work I've always admired but rarely loved. If I see a richer, more perfect drama on TV this year, I'll be surprised. I like "Mildred Pierce" so much that I'm going to recap it for Salon every Monday, starting the morning of March 28. It's the best way to appreciate the breadth of this series' excellence without spoiling key plot twists for the uninitiated.

Where to begin appreciating this great work? The acting alone is enough to merit a separate column. Kate Winslet's performance in the title role is terrific -- intelligent, focused and seemingly devoid of ego. She never indicates, emphasizes, showboats or otherwise tells you how to feel about her character, a divorced single mother who splits from her distracted, cheating husband (Brian F. O'Byrne), takes a grueling job as a waitress, starts selling her delicious homemade pies on the side, works her way into the restaurant business, has a torrid and troubled affair with a penniless former playboy named Monte Beragon (Guy Pearce) and struggles to mother her daughters, master her fate and understand herself. Winslet might be one of the greatest working actresses without evident self-regard. Strong as she is in dialogue scenes, she's even more effective in silent close-ups, letting conflicting emotions play out on her face as she watches, listens and thinks. O'Byrne and Pearce are equally strong and just as subtle. There are no villains in this series, only deeply flawed people, and you react to them as you might react to valued people in your own life, alternating exasperation with affection.

The series itself is a technical and artistic triumph. Its costumes and set decoration are completely imagined yet unfussy, convincing you that this is not a lavish historical fantasia, but a present-tense world, a real place where human beings live and work.  Carter Burwell's score is reminiscent of his work in the Coen brothers' "True Grit" and "A Serious Man" -- introspective and sometimes mournful, with a repeated string melody that bears the story along like a gentle yet implacable ocean current. Ed Lachman's cinematography makes efficiency lyrical, zeroing in on significant details, panning to reveal new spaces and situate characters within them, and using the vertical lines of doorways and window frames to carve screen space into panels; yet it never feels ostentatiously beautiful.  "Mildred Pierce" is the sort of production where spaces and situations aren't presented but entered into, like rooms in a house.

My endorsement comes with two caveats. First, this is not a work that shoves plot points or images into viewers' faces and shouts, "Look at this! It's moving and powerful and important!" It's quiet and unhurried, establishing a deliberate rhythm from its first scene and weaving its  spell through a gradual accumulation of detail. HBO is airing the first two installments Sunday, March 27 (9 p.m. Eastern/8 Central), and if you're planning to watch or record it, I  recommend that you view both episodes back-to-back. The first hour is mostly setup and housekeeping. "Mildred Pierce" doesn't really start to build and crest until the second hour. But by the end of that chapter it has attained an almost overwhelming force.

Second, don't go into "Mildred Pierce" with preconceived notions. Haynes' work here reminded me of a friend's admonition that some of the greatest artists are ones whose work must be experienced twice: the first time to get over what you thought it was going to be, and the second time to appreciate what it actually is. In that sense, viewers who have never read the James M. Cain source novel or seen the beloved 1945 film version might be the ideal audience, because they'll watch without mentally cross-checking every event and line. The HBO "Mildred Pierce" has already been described as a faithful adaptation of James M. Cain's novel, but that's not quite true. Haynes transcribes many of the book's scenes almost verbatim, but the tone and intent are different -- and there's a basic, very important change that's sure to be controversial. The miniseries isn't a remake of the 1945 film either, or a tribute to it, or even an answer to it. It is its own thing.

And as I watched it -- rereading the Cain novel in between chapters -- I think I started to get what Haynes saw in the story, and understand where his interests lay. Thanks to the trifecta of "Mildred Pierce," "The Postman Always Rings Twice" and "Double Indemnity" -- stories steeped in envy, lust and violence -- Cain's name will always be associated with pulp, and once movies got hold of his fiction, people started to see him as a literary progenitor of (or contributor to) film noir. That's accurate, but only up to a point. Cain's fiction is passionate and sometimes lurid -- noir traits for sure -- but it also owes a great deal to social realism. He's not just concerned with who's doing what to whom, but with the economic, social and political forces that shape people's personalities and drive them to desperate acts. (Noir is the drama of class conflict and class resentment, powered by people who have lost social status or never had it, and who contrive violent shortcuts to comfort.)

The HBO "Mildred Pierce" isn't noir or pulp or even a thriller or a melodrama. It's just a drama, period -- an extended character portrait of a particular woman in a particular time and place. Mildred is used to being a comfortable (but unhappy) middle-class housewife. Her life revolves around her likable but straying husband and her two daughters; the elder child, Veda (Morgan Turner in early episodes, Evan Rachel Wood in later chapters), never forgives her for instigating the divorce that pushed out the father who spoiled her; she transforms her natural resentment into monstrously bratty and sometimes hateful behavior, to the point where she seems to take pleasure in ruining any happiness that comes Mildred's way. Haynes treats the book as a portrait of Americans in the transitional 1930s -- an era in which Prohibition and the Great Depression gave way to the New Deal and a return of economic hope, and a time of immense social and psychological change for American women. He's interested in the fabric of everyday reality and his characters' reactions to it -- their struggle to find and keep love, raise kids, pay the bills, improve their lives and perhaps realize their dreams.

The title "Mildred Pierce" is usually thought of as a synonym for melodrama -- for guilt, sex and murder -- and for Joan Crawford, whose performance in the 1945 movie defined her screen image and won her an Oscar. Haynes' take is more naturalistic. He's one of the most acutely film-history-conscious of major American filmmakers, but here, for the first time in his career, he doesn't seem to be trying to interpret a genre, prove a theorem or juxtapose different modes for effect. He's just telling the story. If the production recalls any prior work, it's Terence Davies' adaptation of "The House of Mirth," which was about as visually expressive as an adaptation of a period novel could be while remaining earthbound.  As Mildred, Winslet is the anti-Crawford. Where Crawford's physical presence (simultaneously hyper-feminine and mannish) stylized Mildred and made her into an iconic figure, Winslet's interpretation is more life-size -- like what you might imagine a strong-willed, passionate grandmother or great-grandmother to have been like when you weren't around to know her.

She is a complex and elusive character, impossible to diminish or summarize. She's casually voluptuous but awkwardly aware of her body; she knows she's attractive and takes pride in her attractiveness, but she also hates how it complicates her relationship with men. There's a terrific moment in the third episode where Mildred takes Monte to task for casually calling her "the best piece of tail I ever had," and says that she would be happy to take that as a compliment if it weren't the first thing Monte thought to say about her. In the graphic sex scenes (another major departure from both the book and the 1945 film) Mildred often seems reluctant to let go of herself -- and astonished and delighted when she does. In the scenes where Mildred confronts Veda, trying and failing to suppress the girl's insatiable need to win every argument and dominate every room, you sense her struggling to assert her motherly authority without becoming a monster. When she snaps and slaps her daughter, it's not a melodramatic gesture, but a tragic lapse of control, a confirmation of helplessness in the face of her overwhelming insecurity and anger. The woman is a mystery to herself. Because she lacks the tools and encouragement to delve into her personality and try to make sense of it, the entire story has an undertow of frustration.

Haynes doesn't cheat by giving Mildred or any of the other characters a falsely modern, self-aware consciousness. There are no characters meant to stand in for a 21st century, therapeutic mind-set; these people are who they are, and the era is what it is, and you simply have to meet it on its own terms. That's the real triumph of "Mildred Pierce" -- its ability to recognize the truth of what human beings are, and have been, and present that truth without compromise.