I'm willing to bet the entire contents of my savings account that he's scamming us -- again. Any takers? 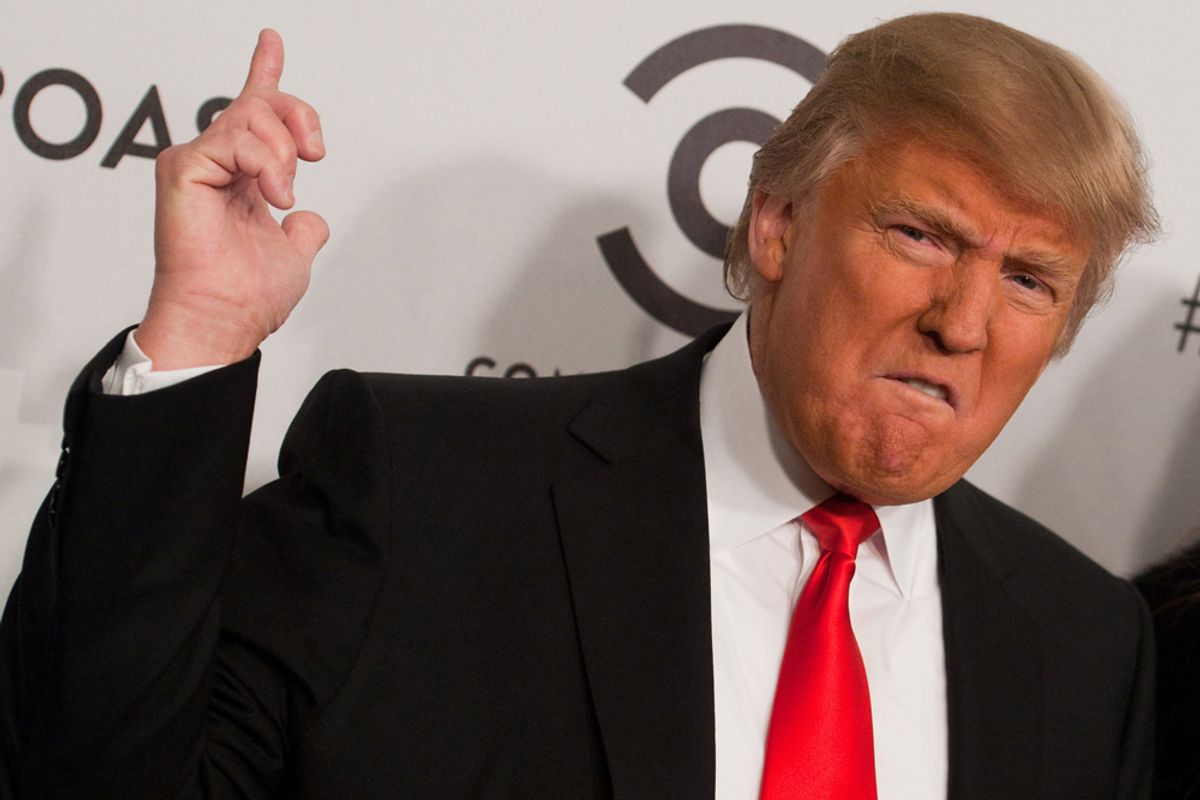 Donald J. Trump, star of a ratings-challenged prime-time show that has become the "dumping ground" for washed-up reality television talent, wants us to believe that he's ready to pump $600 million of his own money into a campaign for president. He's so intent on creating this impression, in fact, that he's now taken up birtherism, something that (presumably) he'd only be doing if he were serious about courting the Republican Party's rabidly anti-Obama base.

The Donald, in case you've forgotten, has taken us all down this road before, when he spent months flirting with a third-party bid for president in 2000. Just like now, he promised to tap his own vast fortune, attracted a torrent of publicity, and fared decently in polls -- around 15 percent in trial heats against Al Gore and George W. Bush. And just like now, he had something to promote: a new book (which came out in January 2000) and, well, the Trump brand. The only difference: Trump was pretending to run as an independent, so instead of opposing abortion and giving aid and comfort to birthers, he claimed to be pro-choice and talked up universal healthcare and a massive income tax surcharge for the super-wealthy.

When that charade finally came to an end in February 2000, the national chairman of the Reform Party -- whose nomination Trump had claimed to be interested in -- branded the New York plutocrat a "hustler."

"Donald Trump came in, promoted his hotels, he promoted his book, he promoted himself at our expense, and I think he understands very fully that we've ended the possibilities for such abuse of our party," Pat Choate said.

He added: "All this was, was a serious hustle of the media, and I think the media should send him a massive bill on it."

There's no book for Trump to promote this time, but there is his aforementioned C-list celebrity train wreck on NBC, which (conveniently enough) premiered just as the Trump for President chatter intensified. Given the attention he's receiving, there's no reason for Trump to stop pretending any time soon -- but rest assured, by the time Iowa and New Hampshire roll around next winter, he'll be calling in to "Morning Joe" from West Palm Beach to explain how he'd totally be kicking Romney's and Pawlenty's butts if only he'd stayed in.

This is why I blurted out during a "Hardball" segment on Wednesday that I'd give away every last cent in my savings account if Trump's name is actually on the New Hampshire primary ballot next year. When Chris Matthews asked how much money I was talking about, I estimated $200. I was off by a little. I checked the balance this morning, and it currently stands at $184.27.

Thus, I am happy to announce the launch of Salon's $184.27 Donald J. Trump Challenge. The concept is simple. Do you actually believe The Donald and think he will run? Can you make a compelling argument why? Then here's your chance to win the entire contents of my savings account. Just reply to TrumpChallenge@salon.com with an essay (no longer than 500 words -- and much shorter, if you want) explaining why you think we should take Trump seriously this time. Be as serious or creative (or both!) as you want. We'll run the best essay here, and its writer will be eligible to receive $184.27 from me if a) Trump's name is on the ballot in next year's New Hampshire primary; and b) he is still an active candidate then.

I'd put up more money, but hey, it's not like I have $600 million to burn. (Then again, I'm not sure The Donald actually does either.) The way I look at it, I can't lose. If I'm right, then I keep my money and get to read some fun essays. And if I'm wrong, then I'm out $184.27 -- but I'll also have a blast reading those Trump financial disclosure forms ...