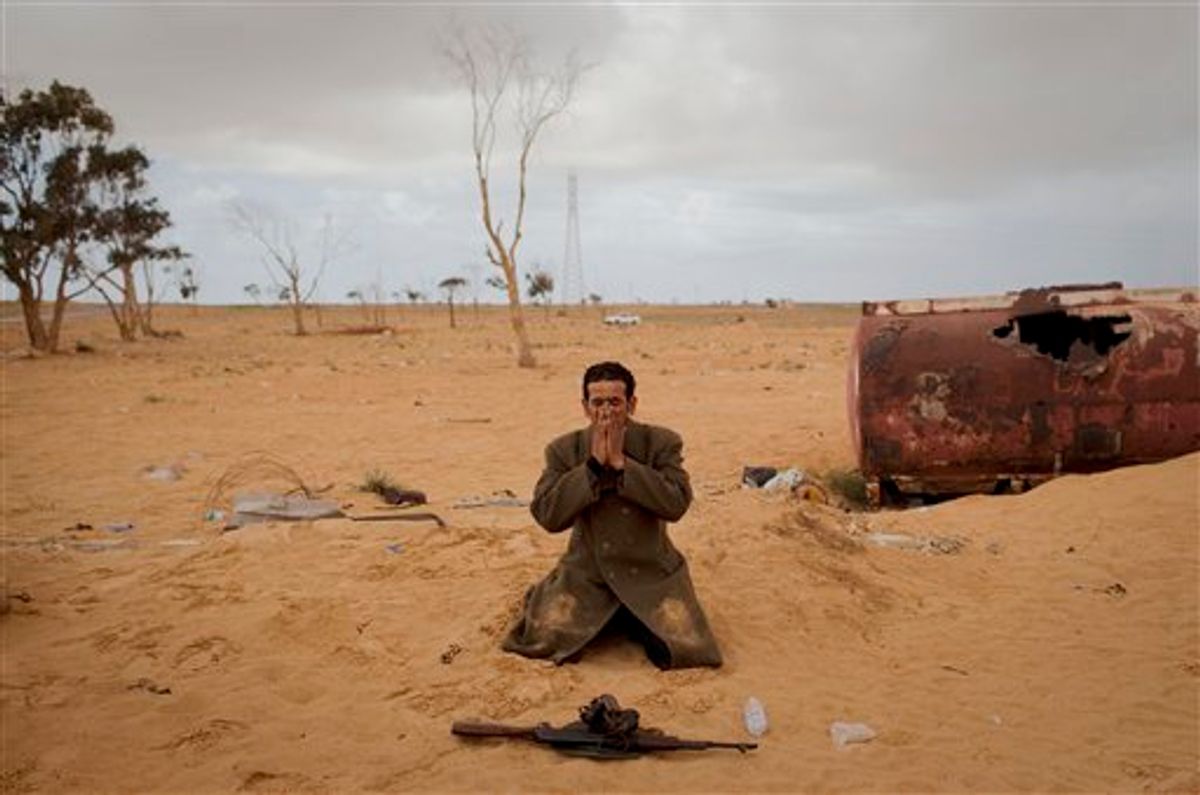 A Libyan rebel prays next to his gun on the frontline of the outskirts of the city of Ajdabiya, south of Benghazi, eastern Libya, Monday, March 21, 2011. The international military intervention in Libya is likely to last "a while," a top French official said Monday, echoing Moammar Gadhafi's warning of a long war ahead as rebels, energized by the strikes on their opponents, said they were fighting to reclaim a city under siege from the Libyan leader's forces.(AP Photo/Anja Niedringhaus) (AP)
--

France declared Libya's airspace "under control" on Friday, after NATO agreed to take command of the no-fly zone in a compromise that appeared to set up dual command centers. Moammar Gadhafi drew a rare rebuke from the African Union, which called for a transitional government and elections.

Coalition warplanes struck Gadhafi's forces outside the strategic city of Ajdabiya, the gateway to the rebel-held east, hitting an artillery battery and armored vehicles.

The strikes were intended to give a measure of relief to the city, whose residents have fled or cowered under more than a week of shelling and fighting between rebels and government troops. Explosions also sounded in Tripoli, the Libyan capital, before daybreak Friday, apparently from airstrikes.

Ajdabiya has been under siege for more than a week, with the rebels holding the city center and scattered checkpoints but facing relentless shelling from government troops on the outskirts. Residents are without electricity or drinking water, and many have fled.

"Libyan airspace is under control, and we proved it yesterday, because a Libyan plane in the hands of pro-Gadhafi forces, which had just taken off from Misrata in order to bomb Misrata, was destroyed by a French Rafale," Adm. Edouard Guillaud said on France-Info radio.

Representatives for the Gadhafi regime met with the African Union on Friday, in Ethiopia, in what the U.N. described as a part of an effort to reach a cease-fire and political solution. Secretary-General Ban Ki-moon said a representative for the rebels also would attend, but that could not immediately be confirmed.

Ping stressed the inevitability of political reforms in Libya and called the aspirations of the Libyan people "legitimate."

Such a solution seemed a long way off, and NATO's military staff began drawing up detailed plans Friday to assume full control of the no-fly zone over Libya in coming days. The U.S. military said coalition jets flew about 150 sorties on Thursday, about 70 of them with American planes.

"The operation is still focusing on tanks, combat vehicles, air defense targets -- really whatever equipment and personnel are threatening the no-fly zone or civilians on the ground in such locations as Ajdabiya and along some other areas on the coast," Marine Corps Capt. Clint Gebke told reporters from aboard the USS Mount Whitney.

Libyan state television showed blackened and mangled bodies that it said were victims of airstrikes in Tripoli. Rebels have accused Gadhafi's forces of taking bodies from the morgue and pretending they were civilian casualties.

A U.S. intelligence report on Monday, the day after coalition missiles attacked Gadhafi's Bab al-Aziziya compound in the capital, said that a senior Gadhafi aide was told to take bodies from a morgue and place them at the scene of the bomb damage, to be displayed for visiting journalists. A senior U.S. defense official revealed the contents of the intelligence report on condition of anonymity because it was classified secret.

"In fact there are no confirmed civilian casualties so far from the coalition airstrikes, and missile strikes, in all the operations since Saturday. Civilian casualties are being caused solely by the Gadhafi regime," British Foreign Secretary William Hague said Friday.

Qatar and U.A.E. are expected to start flying air patrols over Libya by this weekend.