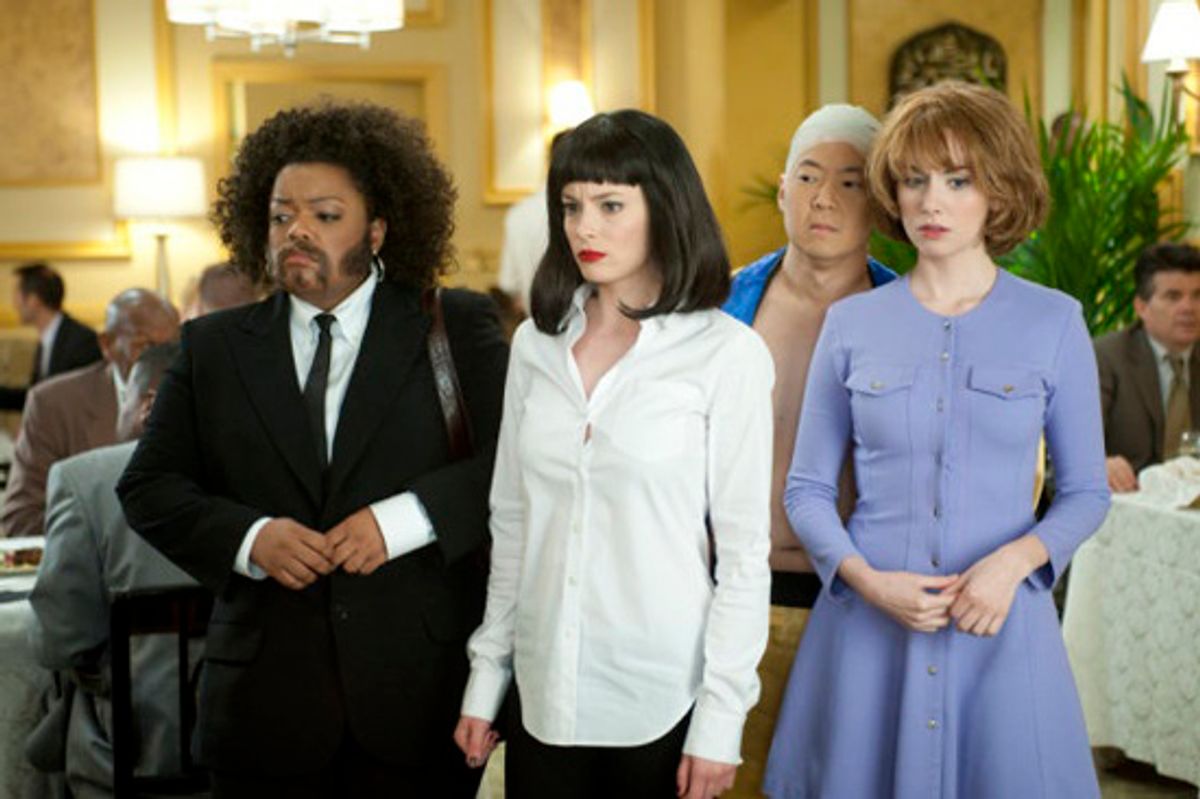 Last night's "Community" -- aptly titled "Critical Film Studies" -- was art. And art about art. And entertainment about entertainment. And a free-ranging conversation about the value of stories. The episode was "Pulp Fiction" metafiction wrapped in "My Dinner With Andre." It had a monologue about being and nothingness and "Cougar Town," references to Quentin Tarantino and Louis Malle, a fire gag and a poop joke, Ken Jeong in a skullcap and Chevy Chase in a fetish outfit. (Bring out The Gimp!) It was the most self-aware, self-reflexive half-hour I've seen on a broadcast network since the "Simpsons" episode "The Itchy and Scratchy and Poochie Show." But it improved on that classic in one important respect: Even as it folded and refolded itself, morphing from analytical to sincere and back again, it focused on characters we've grown to know and love, and scrutinized two of them with such compassion that it made them seem more real than ever.

Advance publicity sold "Critical Film Studies" as 'The 'Pulp Fiction' episode of 'Community.'" Period. In retrospect, that seems as playfully misleading as the opening title card of "Pulp Fiction," a dry definition of pulp fiction (the literary genre) that the film transcended within minutes. You knew "Community" was zigging instead of zagging when Jeff (Joel McHale) walked into a fancy restaurant to meet Abed (Danny Pudi) for a pre-surprise-party dinner. Instead of Dick Dale or Kool and the Gang or some other bone-crushingly obvious Tarantino cue, the soundtrack offered naturalistic voice-over backed by solo piano: the opening of Malle's "Andre" reimagined via "Community." After briefly cutting away to the "Pulp Fiction" party guests, the episode returned to Jeff and Abed in the restaurant ... and stayed there ... and stayed there. Abed's monologue about his epiphany (ultimately non-epiphany) on the set of "Cougar Town" was a riff on one of Andre Gregory's monologues from "Andre." But it was also a totally unexpected yet spot-on observation that Quentin Tarantino and Louis Malle, who are about as different as two directors could be, are united by their belief that talk isn't a substitute for action, but a form of action.

Casually rejecting Jeff's gift of a souvenir replica of Jules' "Bad Motherfucker" wallet from "Pulp Fiction," Abed said he'd decided to quit pop culture cold-turkey and live in the real world. "The girl says, 'Now, when you hear 'action,' I want you to walk from here to there,'" says Abed. He goes on:

"That's when I really started to panic, Jeff, because ... If I'm a person that watches 'Cougar Town,' how can I be in 'Cougar Town'? The more I start thinking about it, the less any of it makes any sense at all. And I just want to turn and run, but it's too late, because the director's calling 'Action.' So, before I take my first step, I realize that I have to stop being someone who's ever seen this show, and become a character on the show ... become a man from 'Cougar Town.'"

Abed tried to get into character (as Jules urged Vincent to do in "Pulp Fiction"!) by devising a name for his "extra" character: Chad. But in creating a back story for Chad (like a writer fleshing out a character), Abed had a chilling realization:

"Chad had lived, Jeff. Chad had lived more than Abed ... And then they called 'cut,' and the scene was over. But I wasn't ready to stop being Chad."

The tale is an existential freakout that ends with the narrator soiling himself.

At this point we might w0nder, if only for an instant: Is Abed changing? Is he becoming someone else -- someone more evolved and mature and connected to the world?

Of course not -- and if you consider the double entendre built into Abed's "Cougar Town" tale, you can see where the episode will end. When Abed expunges all that pop culture -- all that shit -- from his system, he doesn't just void his bowels, he voids himself. Abed's fixation on pop culture is  the realest part of Abed, the center of his life. Get rid of it, and you get rid of Abed.

This is "Community"-style, inside-out, metafictional pretzel logic at its finest. Only by entering the make-believe narrative of a pop culture touchstone could Abed realize the emptiness of a life that revolved around pop culture touchstones. "Who needs any pop culture whatsoever?" Abed asks Jeff. "TV, movies -- to hell with all of it ... This is the first birthday of my new life."

But not really. The monologue turned out to be a piece of a larger fakeout -- part of Abed's strategy to make Jeff's would-be surprise party one aspect of another, hidden surprise party, and re-create another of Abed's favorite films, "My Dinner With Andre," as a birthday gift to himself. The episode ended with another homage to "Andre," scored to that film's closing credits music: Erik Satie's "Gymnopedie No. 1." The cue was inevitable and perfect. But considering how deftly writer Sona Panos and director Richard Ayoade pulled the rug out from under the viewer, the episode could have ended with Scott Joplin's "The Entertainer."

Abed's non-epiphany on the "Cougar Town" set had a sly corollary in the cutaways to the other study group members awaiting Abed. Troy (Donald Glover) stared in awe at a replica of the briefcase from "Pulp Fiction,"a prop that was itself an homage to one of Tarantino's favorite films, "Kiss Me Deadly" (an homage to an homage to an homage). Then he opened the briefcase and revealed its contents: a certificate of authenticity and a light bulb. The light bulb set the certificate of authenticity on fire and destroyed it.

The briefcase was later revealed as a fake -- but the episode established that the singularity of the prop didn't matter. What mattered was that Jeff cared enough about Abed to spend money on what he thought was the actual briefcase from "Pulp Fiction."

Abed and Jeff's restaurant conversation wasn't about "Pulp Fiction," or "Cougar Town," the "Community" characters' fondness for one work or another. It was about the desires and fears that drive people to fixate on "Pulp Fiction," or "My Dinner With Andre," or any other piece of entertainment that centers your personality and helps shape a shapeless existence.

If Quentin Tarantino saw this half-hour of NBC comedy (and why wouldn't he?) I'm sure he was bursting with pride and affection. The makers of "Community" went beyond homage, into understanding. The playful structure, the out-of-nowhere voice-over narration, the languid pacing, the camerawork, the lighting, the deep and circuitous and unexpectedly moving conversations, and most of all the long pauses that Mia Wallace called "comfortable silences," were Tarantino-esque -- but not just in the obvious, imitative sense. They were Tarantinoesque because, like Tarantino at his best, they absorbed and transformed borrowed material into something that was meaningful not just to the filmmaker, but to the characters who were making the references. The characters weren't just referencing films and TV shows. They were divulging truths about themselves -- often painful truths, such as Jeff's confession that he called phone sex hotlines posing as a morbidly obese man because he feared that if he wasn't handsome, no one would like him. That's as real as fake can get.

In a March 8 column, I described "Community" as an example of "footnote comedy" -- comedy so dependent on pop culture references (often at the expense of character and story) that future generations might find it more mystifying than involving. "Critical Film Studies" aside, that's an accurate  description of "Community" -- in its second season, anyway. The show's array of references is vast yet shallow, a wading pool the size of Lake Superior.

But its twee tendencies are redeemed by great virtues: wit, confidence, formal invention and, most of all, a willingness to root its allusions in character and story, and bring everything back to friendship and feeling. (The briefcase Jeff bought for Abed was a fake, but their friendship is real; that realness gave the fake prop real value.) The series also believes (like many postmodern works) that the question of fakeness vs. realness or disposability vs. durability is a false one -- that if a work has something interesting to say, and says it with intelligence, creativity and conviction, then it is by definition substantive and lasting, regardless of how it's made or what it's made of. To quote Vincent Vega, that's a bold statement, but last night's episode of "Community" made it with such conviction that I wouldn't presume to argue. "Critical Film Studies" was "Community" at its most stubbornly original. It dove deep into its own navel and found authenticity.