Laurent Ggagbo, leader of the Ivory Coast, has refused to leave office, prompting fears nationwide of a civil war 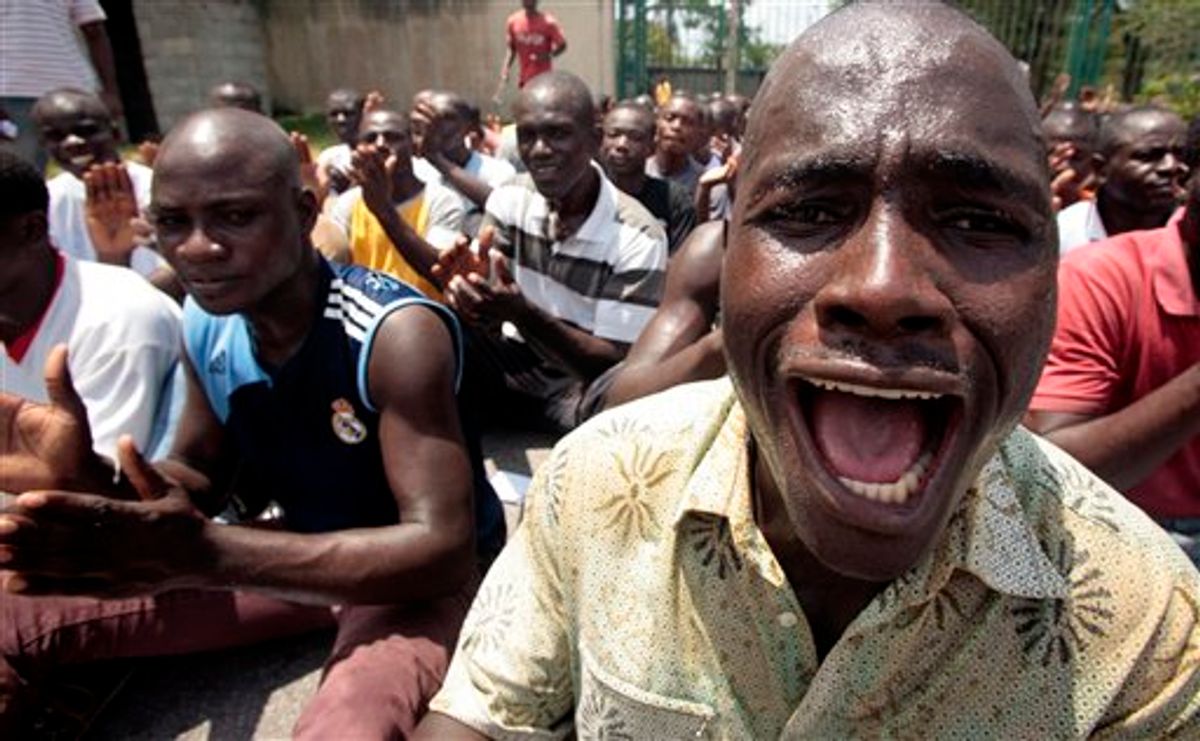 With possessions balanced on their heads, about 1,000 people frantically crowded around buses rented by Mali to evacuate its citizens Friday from Ivory Coast, joining an estimated 1 million people who already have fled amid fears of civil war.

More than 2 million Malians live in neighboring Ivory Coast, and human rights groups say the foreigners are facing growing threats of violence as the Ivorian political crisis intensifies. Evacuation efforts have been hampered by a lack of buses so far.

"700 today. 700 tomorrow. Everyone who wants to leave will be able to as long as I'm here," said Hamet Diawara, president of the council of Malians in Ivory Coast.

Incumbent leader Laurent Gbagbo has refused to cede office despite his rival Alassane Ouattara being recognized by the international community as the rightful winner of November's presidential election. Pro-Gbagbo forces have attacked foreigners from the region whose countries have supported Ouattara.

"We're afraid. Everyone's leaving," said Abdias Goita, a father of two who sat patiently in the shade next to the Malian buses. "My brother had his door broken down by pro-Gbagbo militias. He gave them all the money he had -- about 200,000 francs ($430) -- but they slit his throat anyway."

The United Nations said Friday that up to 1 million people have fled the ensuing violence.

"The massive displacement in Abidjan and elsewhere is being fueled by fears of all-out war," Melissa Fleming, spokeswoman for the U.N. High Commissioner for Refugees, told reporters in Geneva.

The closure of banks and businesses is causing economic chaos in the already impoverished West African country, she said. Unemployment is rising, as are food prices.

On the main road between Abidjan and the border with Ghana, an AP cameraman saw hundreds of vehicles backed up more than 9 miles (15 kilometers) waiting to cross over.

Fleming said previous estimates had put the number of displaced in the whole country at 500,000, indicating a sharp rise in recent days.

The global body is concerned that the fighting could spread to neighboring Liberia, which itself is recovering from years of conflict. Fleming said there are indications that Liberian mercenaries are arriving in Ivory Coast through the countries' porous 435-mile (700 kilometer)border.

The U.N.'s human rights office said at least 462 people have been killed in fighting since December, with at least 52 killed in the past week.

The Geneva-based office also has received unconfirmed reports of 200 foreigners being killed in the west of the country, said spokesman Rupert Colville.