What Sarah Palin should know about Israel

Her visit to the West Bank city of Bethlehem was stymied by a checkpoint, a daily fact of life for Palestinians 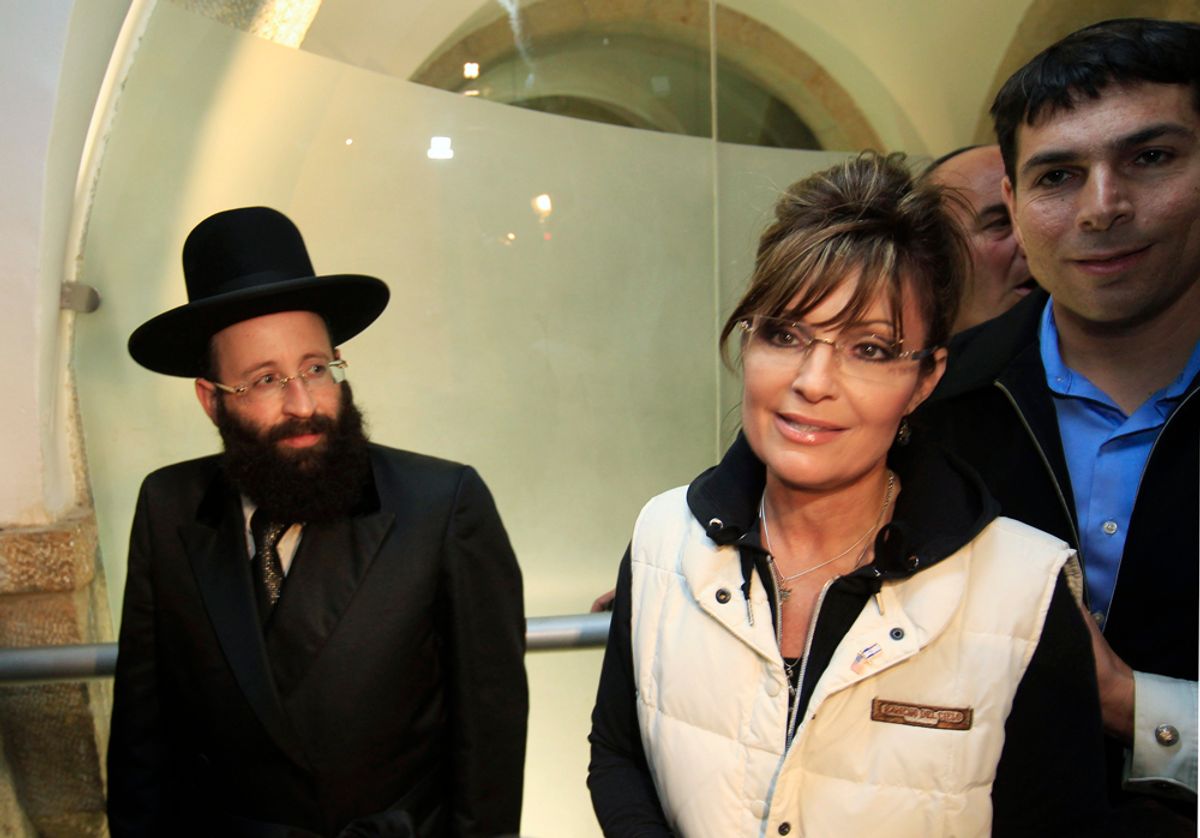 Sarah Palin's trip to Israel this week, which included a meeting with Benjamin Netanyahu, didn't get much media attention amid a heavy news week. One of the more interesting moments of the trip came when, on Monday, Palin and her entourage attempted to go to Bethlehem, the city where Jesus was born.

But Bethlehem is in the occupied West Bank. And when Palin and her tour guides arrived at an Israeli checkpoint south of Jerusalem, photographers nearby noticed that Palin's vehicle stopped. At that point -- for reasons that are still unclear -- Palin decided not to go through the checkpoint and on to Bethlehem. The Guardian reported that Palin may have called off the visit because she had not pre-cleared it with the authorities.

Later in the week, there was, for the first time in several years, a bombing in Jerusalem that killed one woman and injured 30 at a bus station. Authorities have blamed the attack on Palestinians, though there has not yet been an arrest. Now, there's talk of heightened security measures -- which could mean more checkpoints and greater limitations on Palestinian freedom of movement.

In light of these developments, it's a good time to get some basic questions answered about the situation in Israel and the West Bank, with a particular focus on checkpoints. To do this, I spoke with Geoffrey Aronson, the director of research at the Foundation for Middle East Peace in Washington. The following transcript of our conversation has been edited for length and clarity.

Can you give a brief explanation of what the occupation is?

The occupation began in June 1967 when, in the context of Israel’s war with Egypt, Jordan and Syria, it captured what has become known as the West Bank of the Jordan River, from Jordan. It captured the Gaza Strip from Egypt, along with other territories like Sinai and the Golan Heights from Syria. Israel didn’t annex these places as its own legally -- although it did in some respects -- but generally speaking it assumed the role of an occupying or administering power over those territories. It’s under that characterization that it has remained in the West Bank now almost 40 years.

So there are a number of Israeli troops in the West Bank all the time?

Yes. Israel occupies it, and it for many years had established a military government run by the Israeli Defense Forces to administer the areas it had conquered. That changed during the Oslo years beginning in 1993-94 when the IDF began to share some of those administrative responsibilities with what we know now as the Palestinian Authority. But even now it’s still held by Israeli troops. They are the de facto sovereign force there. It’s run by an Israeli general. And there are troops in the West Bank in numbers depending on the security requirements that Israel feels it has to meet.

How do the settlements factor into this whole picture?

The settlements are in some respects a unique aspect of this occupation, and they relate as much to the history of the conflict between Israel and the Arabs as they do to the situation after ’67. Israel is a self-made entity that began when people emigrated to then-Palestine, now Israel, beginning in the early 20th century. The way in which the Jewish community in Palestine gained a foothold and then claimed sovereignty was by settling Jews on the land. In large part this was a zero sum game, in the sense that by claiming land, that land and those resources and the sovereign energy that the resources represented were made unavailable to Palestinians who also claimed this land as their own. That process works for Israel in the sense that land and settlement led to sovereignty and led to a claim on the land that Arabs and the rest of the world ultimately would have no choice but to recognize. It’s that history that informed Israel’s interest in continuing settlement when it came into control of the land in June ’67 -- which many considered part of its God-given homeland. So in a sense what we’re seeing now is a continuation of the historical effort of the Jewish community in Palestine to expand its sovereign presence and by so doing undermine the ability of Palestinian Arabs to do the same.

But under international law this is considered illegal?

Most international lawyers whom one would consult would consider the settlement of civilians in permanent settlements in areas that are under hostile military occupation to be illegal. Israel, however, has its own view of this. The bottom line is they feel they’ve got a right to do this.

This past week when Sarah Palin was visiting Israel, she went up to a checkpoint to get to Bethlehem, and then abruptly decided not to go through. Can you explain what the checkpoints are?

Checkpoints are a military instrument to control the population that you have some reason to suspect. For the first few decades of the occupation, checkpoints were the exception rather than the rule. That began to change with the beginning of the Gulf War. We’ve seen since then that the Israeli decision to restrict and selectively address the ability of Palestinians to move not only into Israel -- which has been restricted tremendously -- but even within the areas that are under military occupation, has only grown and increased. In large part that is a function of Israel's desire to maintain what it prioritizes as a normal everyday life for Israeli settlers who are now living in these areas. Their needs have become the primary humanitarian or economic concern Israel has. If to preserve the normal everyday life of settlers requires restricting the movements of Palestinians, that is seen to be an acceptable trade-off. As the sense of security threat increases, so do the frequency and rigorousness of these checkpoints.

What physically happens at the checkpoints?

There’s a whole spectrum of checkpoints. From very simple but permanent -- earth mounds, for example, that block access permanently for people in vehicles -- to permanent checkpoints that resemble what was at the Brandenburg Gate that marked the division of Berlin. Each has its own character, each has its own set of operating procedures; sometimes the examinations are more rigorous than other times, sometimes cars are permitted through, sometimes they aren't. Sometimes cars with permits are permitted through and sometimes they aren’t. Ambulances are generally permitted through but oftentimes they’re stopped for examination. One of their signature characteristics is that there’s no transparency, there’s no clarity, there are no standards for operating procedures. So one never knows how one is going to be treated, if one will be able to get through, if it will be open, why it would be closed. That lack of transparency again is part of the essential arbitrary nature of the occupation itself.

And how many are there?

Depending on how you count there are some hundreds of obstacles and restrictions on free movement.

If Palin had gone through that checkpoint to Bethlehem as a tourist, what would have happened?

If she were a VIP she wouldn’t have any problem at all because it would have been coordinated and she would have been waved through. These days, things have gotten pretty loose at checkpoints and Bethlehem, in particular, is one that many tourists use. This is a very important economic corridor, both for Israel and for the Palestinian Authority. So, generally speaking, the standard operating procedures at this checkpoint aren’t as hard-edged as they are in many other places. They don’t want to spook tourists and give them the sense they’re in an armed camp and there’s an occupation. Nonetheless it’s a checkpoint, and its essence is to guard and restrict and constrain. So if you’ve got one young kid who's a soldier, he can keep you waiting there for a while. That’s the way the occupation is: It’s run at the lowest level by young kids. So Palin would have experienced a sanitized version of what Palestinians have to deal with every day.

And what is the unsanitized version?

You can wait under the hot sun for an hour, and then they close the checkpoint. Or you can be there with your screaming kid needing to see a doctor and then get there and the Israelis say, you don’t have the necessary permit, or the doctor signed it a week ago and it’s now expired, so you’ll have to come back. Generally speaking, people aren’t physically abused; that’s the exception rather than the rule.

Can you talk about the economic implications of the checkpoint system?

The primary economic effect of these is to at the very least add to the cost of doing business in every one of its dimensions, whether it be the time taken by employees to get to their place of work, the added cost of special security procedures for goods, to the lack of certainty that informs the whole process. For example, the idea of just-in-time inventory is impossible here because there’s no certainty that the roads will be open or that the checkpoint is functioning well or that it won’t close, and so forth.

Before the bombing this week there hadn't been any bombings in Jerusalem for several years. Was your sense that restrictions on movement had been loosened?

What do you expect to happen now?

Certainly if there is an increase in tension I think one of the results will be an increase on the restrictions on movement. I don’t think Israel is anxious to do that, because it imposes costs on them in terms of public relations, which they prefer not to deal with. But in an environment where military security consideration are primary, and those professionals are the ones who set the policy, they understandably always come down on the side of more restrictions, harder lines and so forth. To the extent that tension increases, we begin a reinforcing cascade of decisions that oftentimes only increase tensions, make things worse. We’ve been out of that cycle for a couple of years, at least as far as the West Bank is concerned. The Gaza Strip is another story altogether. But when you don’t fix the problem, the good times last for a while and then you have bad times.