Should I feel guilty for failing my students?

As an adjunct English professor, I know I shouldn't inflate grades -- but I feel like I'm ruining people's lives 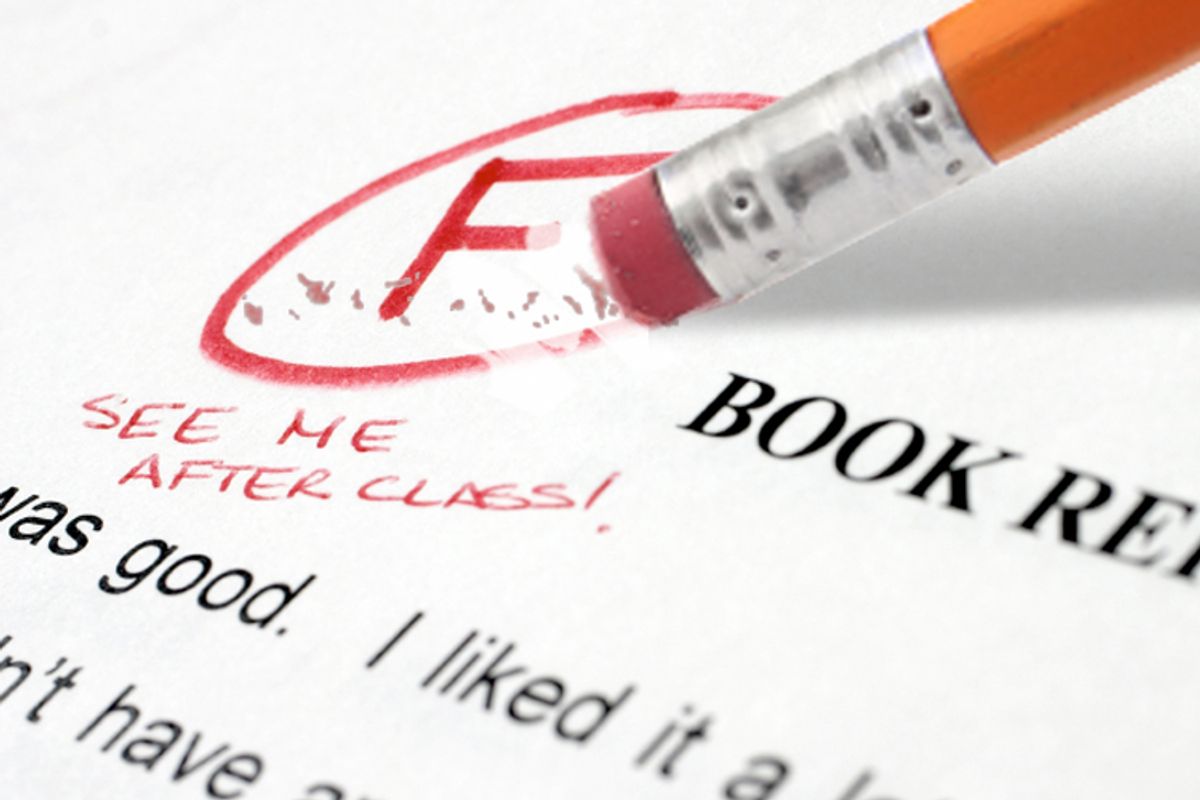 Colleges employ instructors not just for their expertise but for their willingness to administer grades, which is by far the most gut-wrenching and distasteful aspect of the job. Grading student work, like writing parking tickets or leveling property tax assessments, is not employment for the tenderhearted. In my work as an adjunct English professor at a small private college and a local community college, I fail plenty of people, but it’s a struggle.

There is something in the human psyche that shrinks at sitting in judgment of another’s efforts. I suspect that grading has been a sore point for teachers since Ichabod Crane hit the tenure track. To hand out grades with complete objectivity, to adhere to however well-considered a rubric, to give the students exactly what their assignments deserve is a daunting task. Without constant vigilance on the part of the instructor, grades will tend to rise.

Certainly there seems to be grade inflation at the Ivies. In 2007 more than half of the grades received at Harvard were in the A range. Maybe this is to be expected. Harvard is a clubby place, with a "we’re-all-A-students-here" mind-set. And maybe their mind-set is correct. Harvard’s acceptance rate now hovers around 7 percent; it takes only the best of the best, proudly turning away hundreds of valedictorians, National Merit Scholars, and students with perfect SAT scores. It’s quite possible Harvard’s professors can’t make quizzes or tests tough enough to stump those that make the cut.

At the colleges where I teach, the issues are different. Many of my students have landed in the world of academia with only the scantest scholastic preparation. Their efforts are meager and unsatisfying. Do they fail? Do whole classes fail? And for those few students who are at college level, who have perhaps overcome adversity to get themselves to a B or B+ level, doesn’t it seem churlish to award them the grades they actually deserve and not give them a little rewarding boost?

Sometimes it is said that adjunct instructors are the worst offenders when it comes to grade inflation. In her cleverly named study "A Is for Adjunct: Examining Grade Inflation in Higher Education," Brenda S. Sonner spends two years studying a small, unidentified public university that relies heavily on adjunct instructors. She concludes that "adjunct faculty give higher grades for comparable work than do full-time faculty." Ronald C. McArthur studies full- and part-time humanities faculty for three semesters at a small two-year college in New Jersey and concludes that students are "substantially more likely to get a grade of A from an adjunct professor than from a full time professor."

The studies are somewhat vague about the source of this adjunct grade inflation. McArthur says that the reasons "are not clear," though he suspects that adjuncts "are being held hostage to the student evaluations. Wanting to receive a good evaluation could influence a grading decision."

Though my experience may be singular, I have never felt the smallest bit of pressure to be a "popular" instructor. The colleges have never suggested any uptick in my grades. I am under no pressure to assuage disgruntled customers. My colleges' official stance is one of vehement opposition to grade inflation, and I believe they are sincere. Based on strict adherence to many other colleges' grading criteria, my students would forever be doomed to dwell in the place of F’s and D’s. Occasionally, very occasionally, a student may stand on tiptoes and crane her neck and breathe the sweeter air of a C. I fail lots of students, more at the community college than at the small private institution. But it’s not easy to maintain my resolve. Failing all those in a class who deserve to is like trying to keep 23 helium balloons at ground level with your hands. They tend to rise.

First of all, twenty-first-century American culture makes it more difficult to fail people. Our society, for all its blathering about embracing diversity and difference, really has no stomach for diversity and difference when it constitutes disparity. We don’t like to admit that one student may be smarter, sharper, harder working, better prepared, more energetic, more painstaking -- simply a better student -- than another. So we level the playing field. Slow readers get extra time on tests. Safe harbor laws protect substance abusers. Students who miss class for religious reasons, as it says in the boilerplate language the community college suggests that I place in my course syllabus, may be absent without incurring a penalty. While fairness and inclusion are desirable, and while I have no argument with the impulse behind any single policy that strives to mitigate the capricious nature of life, the effect in the aggregate has been to render distasteful the whole idea of one human being passing judgment on the efforts of another. It is a reflex: to be understanding and compassionate about the curveballs life has thrown our fellow human beings. A noble reflex, but at odds with the very nature of grading. How can an instructor even enforce the simple concept of deadlines for assignments? Cars break down, don’t they? Computers crash. Infants get sick. Our quest to provide universally level playing fields has made us reluctant to keep score.

The whole system of grades may be too nineteenth century for our modern taste. Nevertheless, the system remains in place. I have to give grades, and I frequently have to give bad ones, but the system rankles and depresses me in a way it did not rankle and depress previous generations of college instructors. My resolve to give grades blindly, based solely on the work and without regard for the consequences to the student, is compromised; my stance as an arbiter of academic success is debilitated. Passing a failing student starts to seem like one more "accommodation," like extra time given for an exam, to make college life fair.

I am keenly aware of how important these courses are to their livelihoods. Colleges have insinuated themselves everywhere, and the need for college credits is an important part of contemporary work life. The attainment of degrees and certificates is now routinely linked to promotions and higher salary scales. The licensed practical nurse may need 65 more college credits to get her R.N. The aspiring laboratory technician takes core courses in medical technology but also three years of prerequisite courses in the liberal arts and sciences — including English 101 and English 102. B.A. candidates in sociology with a specialty in criminology will be prepared, in the words of the catalogue, for "scholarly careers" in sociology, criminology, and social deviance, as well as jobs in victim counseling, corrections, and law enforcement. Virtually none of my students are headed for scholarly careers in social devi- ance or anything else. They will work -- or are working -- as bailiffs or federal marshals; in sheriff’s departments; as nurses of all kinds; in the billing or human resource divisions of large institutions; in county, state, or federal prisons; as court or correctional officers; or as caseworkers in the caverns of whatever social service agency will have them. Whether much of their college coursework will actually be of any use to them, other than qualifying them for the job, is questionable.

When I give a failing grade to a student, I am not just passing judgment on some abstract intellectual exercise. I am impeding that student’s progress, thwarting his ambition, keeping him down, committing the universal crime of messing with his livelihood -- not to mention forcing him to pay the tuition charge all over again. The stereotypical ivory tower is a realm far removed from workaday concerns; in the tower’s basement, where I labor, any poor grade I issue may mean disastrous economic consequences. So I think long and hard before giving poor grades. I agonize. I get that sick feeling in the pit of my stomach. When I fail someone, I suffer Dickensian visions of starving children, missed mortgage payments, dunning creditors. I know that part of what the college pays me to do is maintain academic standards. As I tell my students: teachers don’t fail students, students fail themselves. I know that by passing the incompetent I will cast a shadow of defilement upon the degrees of those more talented souls who have managed to navigate college successfully. But there are times when issuing a failing grade seems inhumane. I am forced to fail plenty of students, and I am well able to do it; that said, I have certainly given C’s that should have been D’s and D’s that should have been F’s.

Not long ago, I had dinner with a tenured professor of journalism at a four-year college. She had her own take on grading. Her grades were based solely on student improvement. A C-student who makes what she amorphously defines as "progress" receives a B; any hardworking B-student can get an A, whether or not the work actually merits it. She seldom fails anyone. Most of her students, she admits, are really not prepared for higher education. She is lending a helping hand. And because I know that in every system devised by man, somebody’s getting screwed, I asked her: what about the occasional good students, the ones who can assemble a parsed sentence, who may actually deserve an unsullied B or A?

"They don’t need my help," she said, and I would swear that she sniffed.

She is the decider, in George W. Bush’s notable coinage, of who needs help and who doesn’t, and suddenly, without notice, we have moved far afield of the job description for a college professor.

The Bureau of Labor Statistics reports that in 1975, 31 percent of college teachers were female; by 2009, the number had grown to 49.2 percent. There are more women teaching in college than ever, and it is quite possible that their presence, coupled with our discovery of the postmodern narrative, has had a feminizing effect on the collective unconscious of faculty thought. Strong winds of compassion blow across campus quads. Women are more empathetic than men, more giving, simply more bothered by anyone’s underdog status. Many of the female adjuncts I have spoken to seem blessed and cursed by feelings of maternity toward the students. Women think about their actions, and the consequences of their actions, in a deeper way than do men. Women may not be quite as inclined to sigh and, with a murmured "fuck it," half-angry and half-miserable, possessed by the fatalism of someone throwing the first punch in a bar fight, mark an F in the grade book. I administer grades fairly, but how difficult it is.

Everyone and everything is in ascendancy, and I must pull them back to Earth. Grading writing fairly is as hard as writing itself. For the writer, the blank page is like a window to the teeming world, and he or she must sidestep distraction to harness only what will support the thesis. The writer sees too much, as does the instructor. In every assignment submitted the instructor sees all that surrounds the writer: the past, the future, possibility, disappointment, local narratives, desperate circumstances, sinking hopes, even the ghostly rattling chains of previously failed English courses. The view for the grader is kaleidoscopic; all that authorial backstory makes for quite a din. Who could possibly concentrate?

Professor X (a pseudonym) has been teaching English composition and literature for ten years at two small colleges somewhere in America. His book is called, "In the Basement of the Ivory Tower: Confessions of an Accidental Academic."