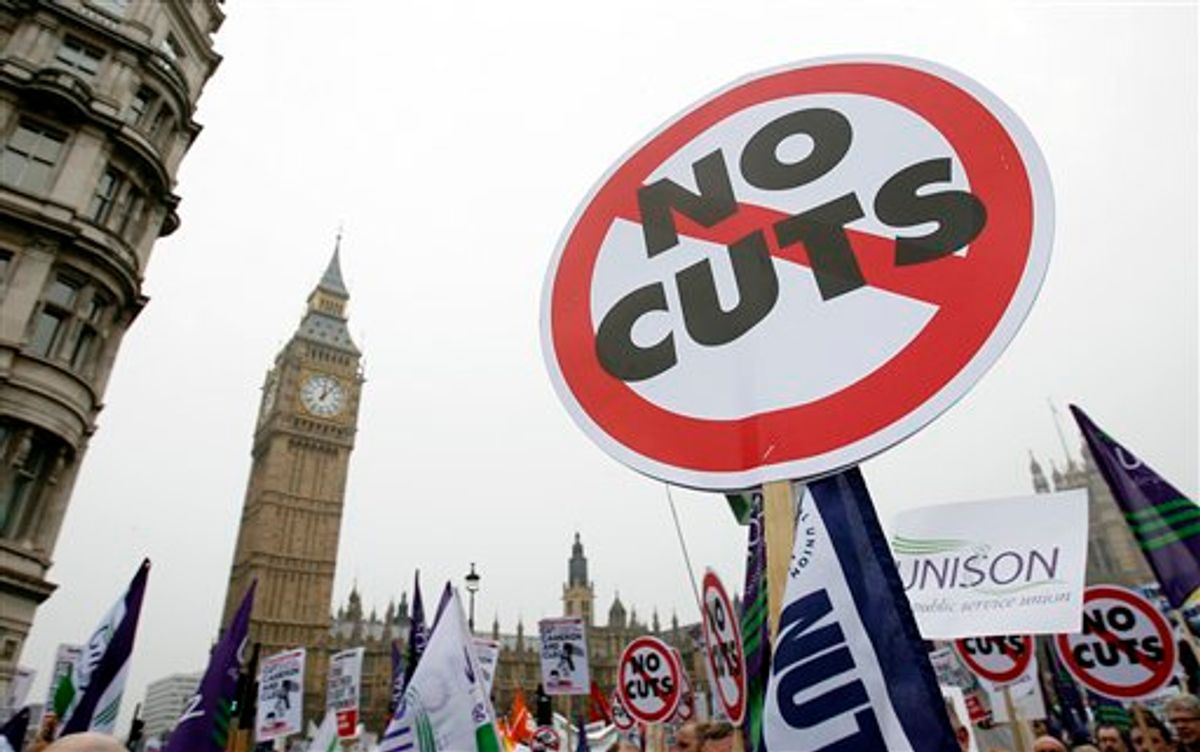 Back-dropped by Big Ben, demonstrators against the coalition government's spending cuts march in London, Saturday, March 26, 2011. Tens of thousands of mostly peaceful demonstrators streamed into central London on Saturday to march against government budget cuts, with a small breakaway group smashing its way into a bank, breaking windows and spray painting logos on the walls . (AP Photo/Akira Suemori) (AP)
--

A quarter-million mostly peaceful demonstrators marched through central London on Saturday against the toughest cuts to public spending since World War II, with some small breakaway groups smashing windows at banks and shops and spray painting logos on the walls.

Organizers of the March for the Alternative said people from across the country were peacefully joining in the demonstration, the biggest protest in London since a series of rallies against the Iraq war in 2003.

Commander Bob Broadhurst of the Metropolitan Police confirmed that more than 250,000 people had marched peacefully, but said around 500 had caused trouble in London's main shopping streets.

He said nine people had been arrested, for public disorder and criminal damage. Police said 28 people had been injured during the demonstration, and seven were admitted to hospitals for a range of problems, including shortness of breath and a suspected hip fracture. Five police officers were also injured and one of those had to be treated in hospital for a groin injury.

Police said one group of a few hundred people broke away from the main march, scuffling with police officers and attempting to smash shop windows on two of London's main shopping streets. Others threw objects at the posh Ritz Hotel in nearby Piccadilly. Members of protest group UK Uncut later walked into the nearby luxury department store Fortnum and Mason and remained inside for a few hours. Police clashed with other demonstrators outside.

But the protests otherwise had a carnival feel. School teachers, nurses and students all marched through central London and rallied in Hyde Park, one of London's biggest public gardens, with banners, balloons and whistles.

Britain is facing 80 billion pounds ($130 billion) of public spending cuts from Prime Minister David Cameron's coalition government as it struggles to get the country's large budget deficit under control. The government has already raised sales tax, but Britons are bracing for big cuts to public spending.

After the country spent billions bailing out indebted banks, and suffered a squeeze on tax revenue and an increase in welfare bills, Treasury chief George Osborne has staked the coalition government's future on tough economic remedies.

As many as half a million public sector jobs will be lost, about 18 billion ($28.5 billion) axed from welfare payments and the pension age raised to 66 by 2020, earlier than previously planned.

The TUC, the main umbrella body for British unions, says it believes the cuts will threaten the country's economic recovery, and has urged the government to create new taxes for banks and to close loopholes that allow some companies to pay less tax -- an argument that chimes with many of the protesters.

"They shouldn't be taking money from public services. What have we done to deserve this?" said Alison Foster, a 53-year-old school teacher. "Yes, they are making vicious cuts. That's why I'm marching, to let them know this is wrong."

Ed Miliband, leader of the opposition Labour Party, likened the march to the suffragette movement in Britain and the civil rights movement in America. "Our causes may be different but we come together to realize our voice. We stand on the shoulders of those who have marched and have struggled in the past," he told protesters at the rally.

The TUC has called for a peaceful protest during which people walk along official routes that have already been cleared with police. But leaflets scattered around central London by other groups have asked demonstrators to leave the official route and stay in central London after the event officially ends in the afternoon.

In another incident away from the main march, a group burned a giant model of a Trojan horse made by art students and dragged into central London.

The students said the horse was a metaphor for deputy Prime Minister and Liberal Democrat party leader Nick Clegg. Clegg's party had promised not to raise tuition fees during their election campaign but abandoned that pledge when they formed a coalition government with the Conservative party.