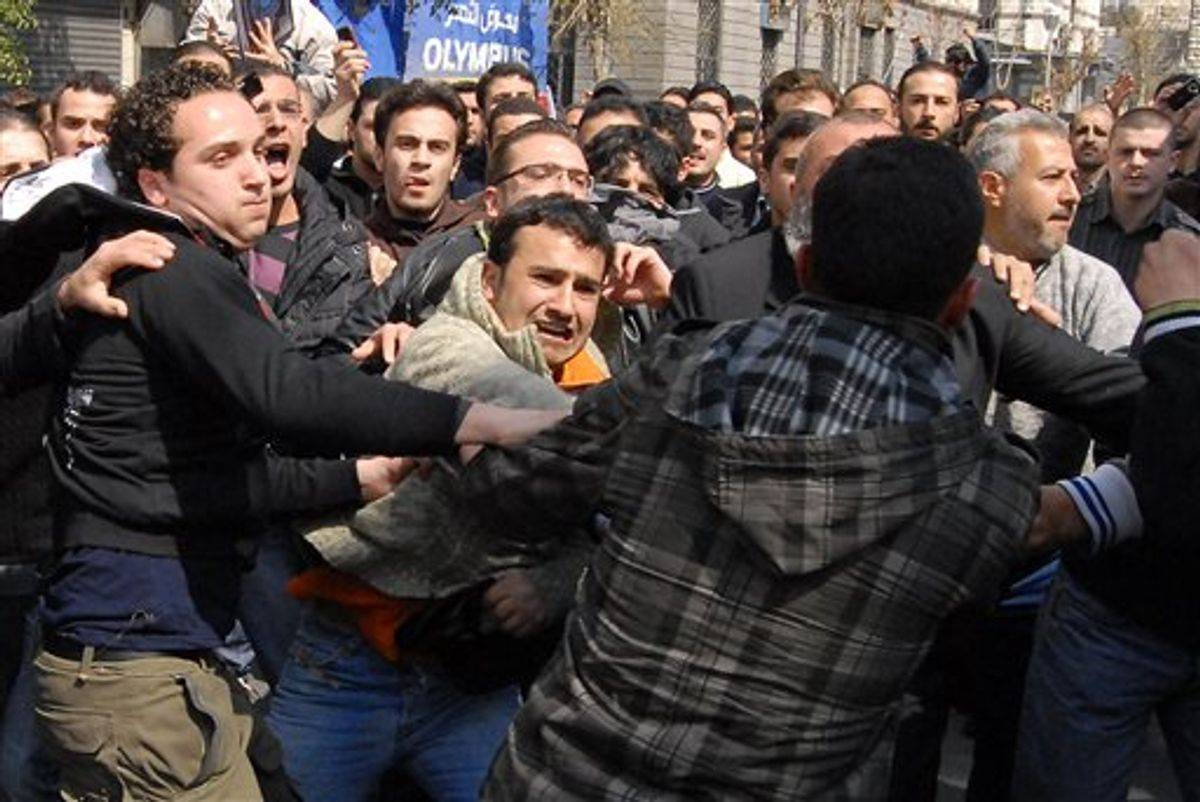 Syrian President Bashar Assad pulled back police and soldiers from a restive southern city and released dozens of political prisoners on Saturday in an attempt to appease demonstrators furious about a violent government crackdown on dissent that has left dozens dead.

A resident told The Associated Press by telephone that security forces had withdrawn to the outskirts of Daraa, where protests demanding the release of youths arrested for spraying anti-government graffiti have spiraled into more than a week of daily confrontations with security forces, who have repeatedly opened fire.

The protests spread throughout Syria on Friday and witnesses reported 15 people killed in at least six cities and villages.

The Daraa resident said more than 1,000 people were holding a silent sit-in the al-Omari mosque, the epicenter of the protests. Protesters used the mosque as a refuge and ad hoc medical center until they were driven out in a government assault on Wednesday. They retook the mosque during clashes with government forces on Friday, witnesses said.

The clashes erupted after protesters attack a statue of late President Hafez Assad in Daraa's main square, witnesses said. The Daraa resident said the statue had been knocked down, a giant picture of President Bashar Assad, the late leader's son, had been torn apart.

A video posted on the main Facebook page used by Syrian pro-democracy activists showed a crowd of young men in Deraa climbing onto the base and trying to shake its from its perch, then rushing toward a nearby building, some throwing what appear to be stones. Suddenly, automatic weapons fire breaks out and the video ends.

A resident told The Associated Press that he saw two bodies and many wounded people brought to Daraa's main hospital after the shooting.

After nightfall, thousands of enraged protesters snatched weapons from a far smaller number of troops and chased them out of Daraa's Roman-era old city, taking back control of the al-Omari mosque, witnesses said.

Activists called online for a popular peaceful uprising Saturday in all Syrian provinces. It urged people to take part in funerals "and not return home."

Most cities appeared calm, however, and a human rights activist said authorities had released 70 political prisoners. Abdul-Karim Rihawi, who heads the Syrian Human Rights League, said most of those released on Saturday had been imprisoned at Saidnaya, a prison in a Damascus suburb that houses political detainees. He said no further details were immediately available and there was no official confirmation.

An activist in Damascus said a funeral had been held in the village of Sanamein for seven people shot when demonstrators tried to march a short distance to Daraa to support the protesters there.

The activist said people in Sanamein said mourners shouted slogans in support of the Daraa uprising but there was no violence.

It said two people were killed in confrontations in the Syrian coastal city of Lattakia Friday, and some 100 others hurt, including 80 police. It did not elaborate.

The spread of protests to Lattakia had special significance and sensitivity, because the city is almost evenly divided between Sunni Muslims, the majority in Syria, and Alawites, members of a branch of Shiite Islam who hold most positions of power, including the presidency.

The state-run news agency said an armed group attacked an officers' club in the central city of Homs on Friday, killing one person and wounding others.

Videos posted on social networking sites Friday night showed protesters in Homs tearing down a large poster of Hafez Assad over the entrance to the Officers Club. The authenticity of the footage could not be independently verified.