Huge radiation spike at Japan nuclear plant was a mistake 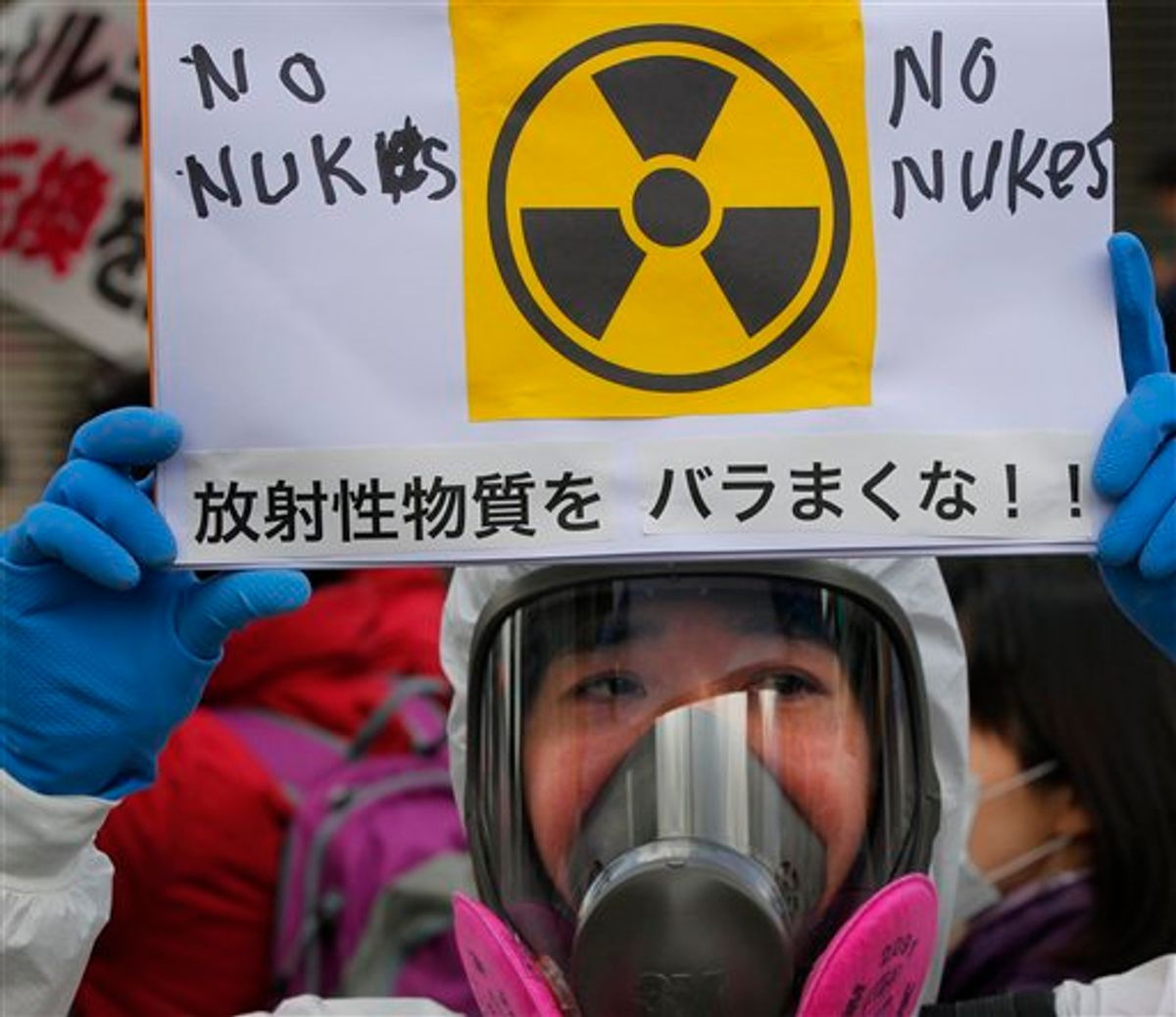 Emergency workers struggling to pump contaminated water from Japan's stricken nuclear complex fled from one of the troubled reactors Sunday after reporting a huge increase in radioactivity -- a spike that officials later apologetically said was inaccurate.

The apology came after employees fled the complex's Unit 2 reactor when a reading showed radiation levels had reached 10 million times higher than normal in the reactor's cooling system. Officials said they were so high that the worker taking the measurements had withdrawn before taking a second reading.

On Sunday night, though, plant operators said that while the water was contaminated with radiation, the extremely high reading was a mistake.

He said officials were taking another sample to get accurate levels, but did not know when the results would be announced.

The situation came as officials acknowledged there was radioactive water in all four of the Fukushima Dai-ichi complex's most troubled reactors, and as airborne radiation in Unit 2 measured 1,000 millisieverts per hour -- four times the limit deemed safe by the government, Kurita said.

Officials say they still don't know where the radioactive water is coming from, though government spokesman Yukio Edano has said some is "almost certainly" seeping from a cracked reactor core in one of the units.

While the discovery of the high radiation levels -- and the evacuation of workers from one reactor unit -- again delayed efforts to bring the deeply troubled complex under control, Edano insisted the situation had partially stabilized.

"We have somewhat prevented the situation from turning worse," he told reporters Sunday evening. "But the prospects are not improving in a straight line and we've expected twists and turns. The contaminated water is one of them and we'll continue to repair the damage."

The discovery over the last three days of radioactive water has been a major setback in the mission to get the plant's crucial cooling systems operating more than two weeks after a massive earthquake and tsunami.

The magnitude-9 quake off Japan's northeast coast on March 11 triggered a tsunami that barreled onshore and disabled the Fukushima plant, complicating an immense humanitarian disaster.

The death toll from the twin disasters stood at 10,668 Sunday, with more than 16,574 people missing, police said. Hundreds of thousands of people are homeless.

Workers have been scrambling to remove the radioactive water from the four units and find a safe place to store it, TEPCO officials said.

On Sunday night, Minoru Ogoda of Japan's nuclear safety agency said each unit could have hundreds of tons of radioactive water.

The protracted nuclear crisis has spurred concerns about the safety of food and water in Japan, which is a prime source of seafood for some countries. Radiation has been found in food, seawater and even tap water supplies in Tokyo.

Just outside the coastal Fukushima nuclear plant, radioactivity in seawater tested about 1,250 times higher than normal last week -- but that number had climbed to 1,850 times normal by the weekend.

Hidehiko Nishiyama, a nuclear safety official, said the increase was a concern, but also said the area is not a source of seafood and that the contamination posed no immediate threat to human health.

Experts with the International Atomic Energy Agency said the ocean would quickly dilute the worst contamination.

Up to 600 people are working inside the plant in shifts. Nuclear safety officials say workers' time inside the crippled units is closely monitored to minimize their exposure to radioactivity, but two workers were hospitalized Thursday when they suffered burns after stepping into contaminated water. They are to be released from the hospital Monday.

Edano has urged TEPCO to be more transparent about the potential dangers after the safety agency revealed the plant operator was aware of high radiation levels in the air in Unit 3 several days before the two workers suffered burns there.

A top TEPCO official acknowledged Sunday it could take a long time to completely clean up the complex.

"We cannot say at this time how many months or years it will take," TEPCO Vice President Sakae Muto said, insisting the main goal now is to cool the reactors.

A poll, meanwhile, showed that support for Japan's prime minister has risen as the administration tackles the disasters.

The public opinion poll conducted over the weekend by Kyodo News agency found that approval of Prime Minister Naoto Kan and his Cabinet rose to 28.3 percent after sinking below 20 percent in February, before the earthquake and tsunami.

Last month's low approval led to speculation that Kan's days were numbered. While the latest figure is still low, it suggests he is making some gains with voters.

About 58 percent of respondents in the nationwide telephone survey of 1,011 people said they approved of the government's handling of the March 11 earthquake and tsunami, but a similar number criticized its handling of the nuclear crisis.