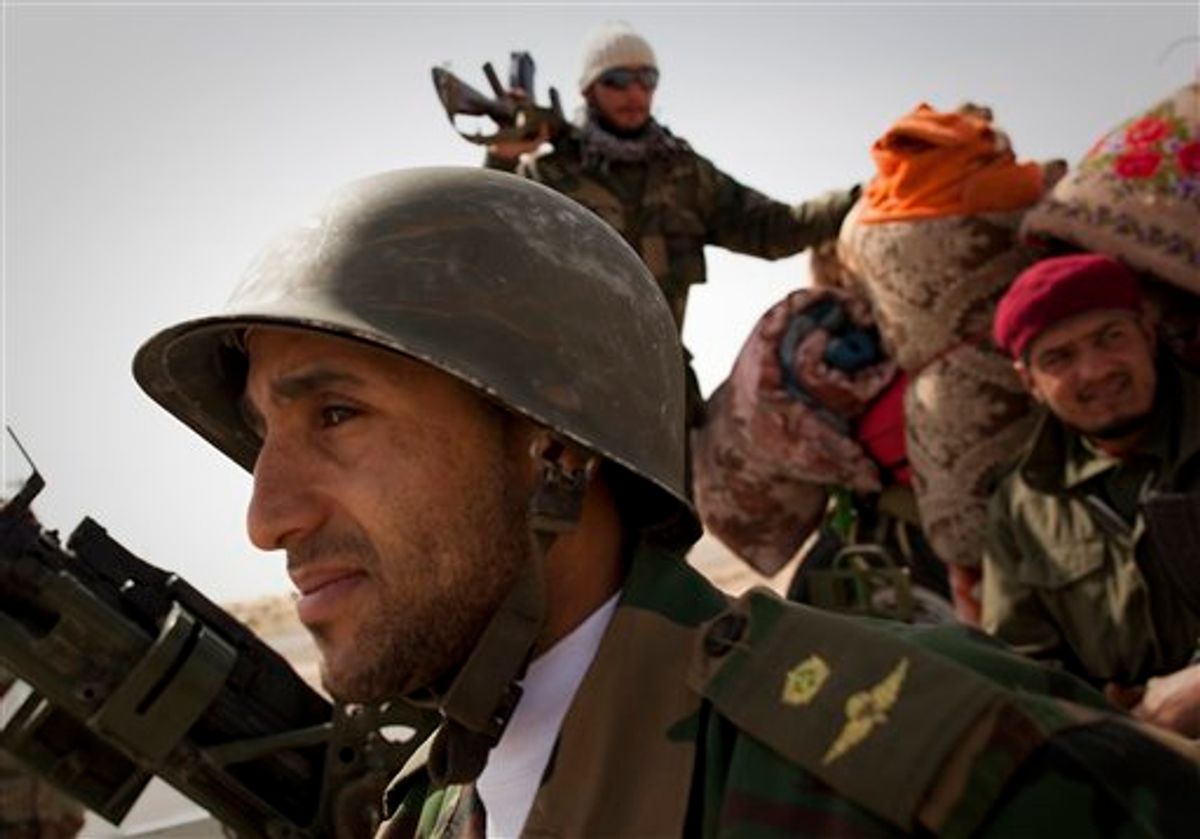 Libyan rebels stop at a checkpoint in Al-Egila, east of Ras Lanuf, eastern Libya, Sunday, March 27, 2011. The rebels claim that they have entered Ras Lanuf. The rebels claim that they have entered Ras Lanuf. Libyan rebels took back a key oil town and pushed westward Sunday toward the capital, seizing momentum from the international airstrikes that tipped the balance away from Moammar Gadhafi's military. Brega, a main oil export terminal in eastern Libya, fell after a skirmish late Saturday and rebel forces moved swiftly west, seizing the tiny desert town of Al-Egila a collection of houses and a gas station on their way to the massive oil refining complex of Ras Lanouf. (AP Photo/Anja Niedringhaus) (AP)
--

Libyan rebels have seized back a second key oil complex and are pushing west toward Tripoli, after international airstrikes that tipped the balance away from Moammar Gadhafi's military.

The rebels seized back the oil refinery of Ras Lanouf on Sunday after taking control of Brega, another oil complex on eastern Libya's coast.

Ras Lanouf and Brega were responsible for a large chunk of Libya's 1.5 million barrels of daily exports, which have all but stopped since the uprising that began Feb. 15 and was inspired by the toppling of governments in Tunisia and Egypt.

Brega, a main oil export terminal in eastern Libya, fell after a skirmish late Saturday and rebel forces moved swiftly west, seizing the tiny desert town of Al-Egila -- a collection of houses and a gas station -- on their way to the massive oil refining complex of Ras Lanouf.

"There was no resistance. Gadhafi's forces just melted away," said Suleiman Ibrahim, a 31-year-old volunteer, sitting in the back of a pickup truck. "This couldn't have happened without NATO. They gave us big support."

"As they move round the coast, of course, the rebels will increasingly control the exit points of Libya's oil," British Defense Secretary Liam Fox told the BBC. "That will produce a very dynamic and a very different equilibrium inside Libya. How that will play out in terms of public opinion and the Gadhafi regime remains to be seen."

"The key here was establishing a military mission that was achievable, was achievable in a limited period of time and could be sustained," he told CBS' "Face the Nation" on Sunday.

The Gadhafi regime on Saturday acknowledged the airstrikes had forced its troops to retreat and accused international forces of choosing sides.

"This is the objective of the coalition now, it is not to protect civilians because now they are directly fighting against the armed forces," Khaled Kaim, the deputy foreign minister, said in the capital, Tripoli. "They are trying to push the country to the brink of a civil war."

The U.N. Security Council authorized the operation to protect Libyan civilians after Gadhafi launched attacks against anti-government protesters who demanded that he step down after 42 years in power. The airstrikes have crippled Gadhafi's forces, allowing rebels to advance less than two weeks after they had seemed at the brink of defeat.

The rebel turnaround is a boost for President Barack Obama, who has faced complaints from lawmakers from both parties that he has not sought their input about the U.S. role in the conflict or explained with enough clarity about the American goals and exit strategy.

Obama was expected to give a speech to the nation Monday, and U.S. Secretary of State Hillary Rodham Clinton on Sunday defended the administration's decision.

Libya, she told CBS, "had a leader who used military force against the protesters from one end of his country to the other, who publicly said things like "we'll show no mercy," "we'll go house to house," and the international community moved with great speed in part because there's a history here."

Pentagon officials are looking at plans to expand the firepower and airborne surveillance systems in the military campaign, including using the Air Force's AC-130 gunship armed with cannons that shoot from the side doors, as well as helicopters and drones.

Fox, the British foreign minister, ruled out supplying arms to the rebels. "We are not arming the rebels, we are not planning to arm the rebels," he said.

NATO's top decision-making body meets Sunday to expand its enforcement of the no-fly zone to include airstrikes against Libyan ground targets. Washington has been eager to hand off responsibility to NATO, which is expected to take command Sunday of the no-fly zone mission.

Pope Benedict XVI urged a suspension of fighting as soon as possible, telling pilgrims in St. Peter's Square he was praying for harmony in Libya and North Africa, but was making "a heartfelt appeal . . . to immediately start a dialogue to suspend the use of arms."