The economy is reeling and we're in three wars, but Republicans across the country are focused on ... abortion? 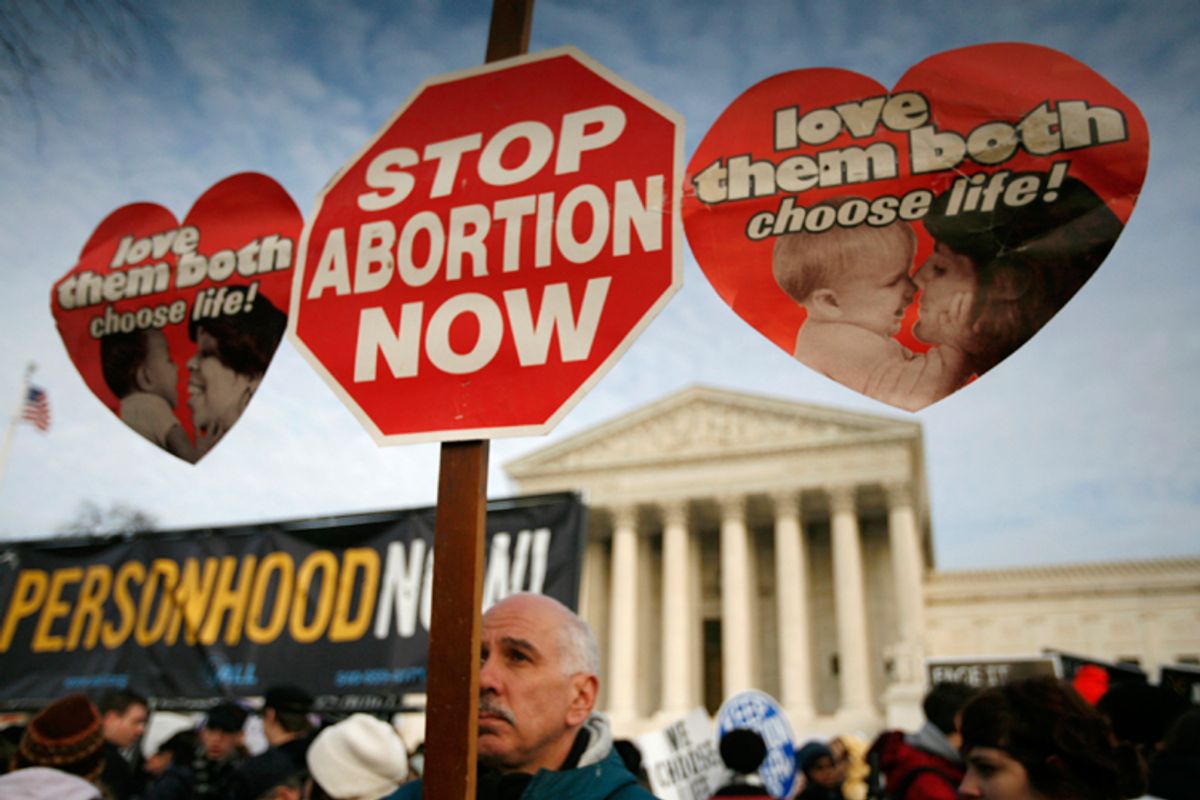 When Republicans profited from the miserable economy to sweep up huge wins in last fall's election, most political watchers figured they knew what was coming: budget cuts, privatization of more government functions, and tax cuts for the wealthy. The push to dismantle public sector unions has been a bit of a surprise, but not a jarring one.

But what seems to have thrown everyone -- save for a handful of embittered and neglected pro-choice activists -- for a loop is the way Republican lawmakers at both the national and state levels have focused so intently on the uteruses of America. Republicans appear to believe that the women of America have wildly mismanaged these uteruses in the four decades since the Supreme Court gave them control over them -- and now that Republicans have even a little bit of power, they’re going to bring this reign of female tyranny over uteruses to an end.

After all, the Republican House speaker, John Boehner, has identified limiting women's access to abortion and contraception as a "top priority" -- this with the economy is in tatters and the world in turmoil. Boehner's and the GOP's abortion fixation raises an obvious question: Why now, when there are so many other pressing issues at stake?

There isn’t just one explanation. The assault on reproductive rights is intensifying now because of a convergence of several otherwise unrelated events that have created the perfect moment for the anti-choice movement to go for the kill.

Republicans have managed to score a couple of major victories against women's rights in the past few years. Both of the main obstacles to dismantling reproductive rights -- the Supreme Court and the Democrats -- have buckled under anti-choice pressure, emboldening the movement to demand even more, including rollbacks on contraception access.

In 2007, the Supreme Court, with a 5-4 vote, upheld the Partial Birth Abortion Act, which not only set a precedent of the court validating a ban on an abortion procedure necessary to preserve some women's lives, but also introduced a new justification to limit women's rights. Justice Anthony Kennedy argued in the majority opinion that the D&X procedure could be banned in order to save women from the possibility of regret down the road. After this ruling, anti-choice bills sprung up like weeds, many of them rooted in this same assumption that women are too silly to be trusted to make their own decisions. Waiting periods, ultrasound requirements and forced "counseling" all make accessing abortion that much harder -- even as each step is dressed up as protection for women against their own flightiness and inability to make good decisions.

But the bigger victory was getting a Democratic president to sign an executive order barring insurance companies from offering abortion coverage to customers who are using federal subsidies to pay for insurance. Barack Obama signed the order under duress; there was no way to pass his healthcare reform bill without doing so. But the lesson for Republicans was clear: When it comes to reproductive rights, they don’t actually need to be in charge to get their way. If reproductive rights can be exploited to nearly derail healthcare reform while the Democrats control Congress and the presidency, think of how much leverage the issue gives them now that they've gained control of the U.S. House and a bunch of new statehouses.

It’s hard to overstate how much Republican energy is invested in bringing the uteruses of America under right-wing control. The House went into an anti-choice frenzy upon being sworn in in January, passing two bills that would eliminate private insurance funding for abortion, one that would dramatically cut funding for international family planning, and the Pence Amendment, which would ban Planned Parenthood from receiving any federal funding. And in case the Pence Amendment doesn’t work, the House also zeroed out all funding for Title X, which subsidizes reproductive healthcare for low-income patients, in the continuing resolution that funds the federal budget.

For the right, rolling back reproductive rights is considered a worthy goal in its own right, but since the issue could also provoke a budget showdown that could result in a government shutdown, it's also a useful tool in their effort to force Democrats to blink. As with their push to bust unions at the state level, Republicans stand to gain electorally by wreaking havoc on the pro-choice movement and undermining its ability to get out the vote for Democrats.

On the state level, an unprecedented number of anti-choice bills are being introduced in response to the perceived anti-choice bent of the Supreme Court. Florida alone has introduced 18 separate anti-choice bills. Gov. Rick Perry of Texas has declared mandatory ultrasounds for abortion patients an emergency priority, and fast-tracked it through the Legislature. Three separate states have introduced bills that could legalize domestic terrorism against abortion providers, though a bill in South Dakota was withdrawn under pressure. Instead, that state's Legislature moved on to pass the most draconian abortion law in the country, one that would require a woman to wait 72 hours for an abortion and listen to a lecture from an anti-choice activist before having an abortion. These examples represent just a tiny fraction of the anti-choice bills percolating through state legislatures.

Maybe this is all surprising. After all, haven't we heard for the last two years that the Tea Party is more libertarian and less socially conservative? If you bought that line, congratulations -- you’re ensconced in Beltway wisdom. The truth is that a new name for the same old conservative base hasn’t changed the nature of that base. Just as before, the "small government" conservatives and the religious right have a great deal of overlap. With gay rights waning as a powerful wedge issue, keeping the religious right motivated and ready to vote is harder than ever. Reproductive rights creates new incentives for church-organized activists to keep praying, marching, donating and, most important, voting for the GOP.

Amanda Marcotte is a freelance writer, a blogger, and the author of two books, "It's a Jungle Out There" and "Get Opinionated." You can follow her through her Twitter feed @amandamarcotte.