Ladies and gentlemen, we've been cleared to land. Or have we?

How dangerous is it when a flight crew has to land without the aid of air traffic control? 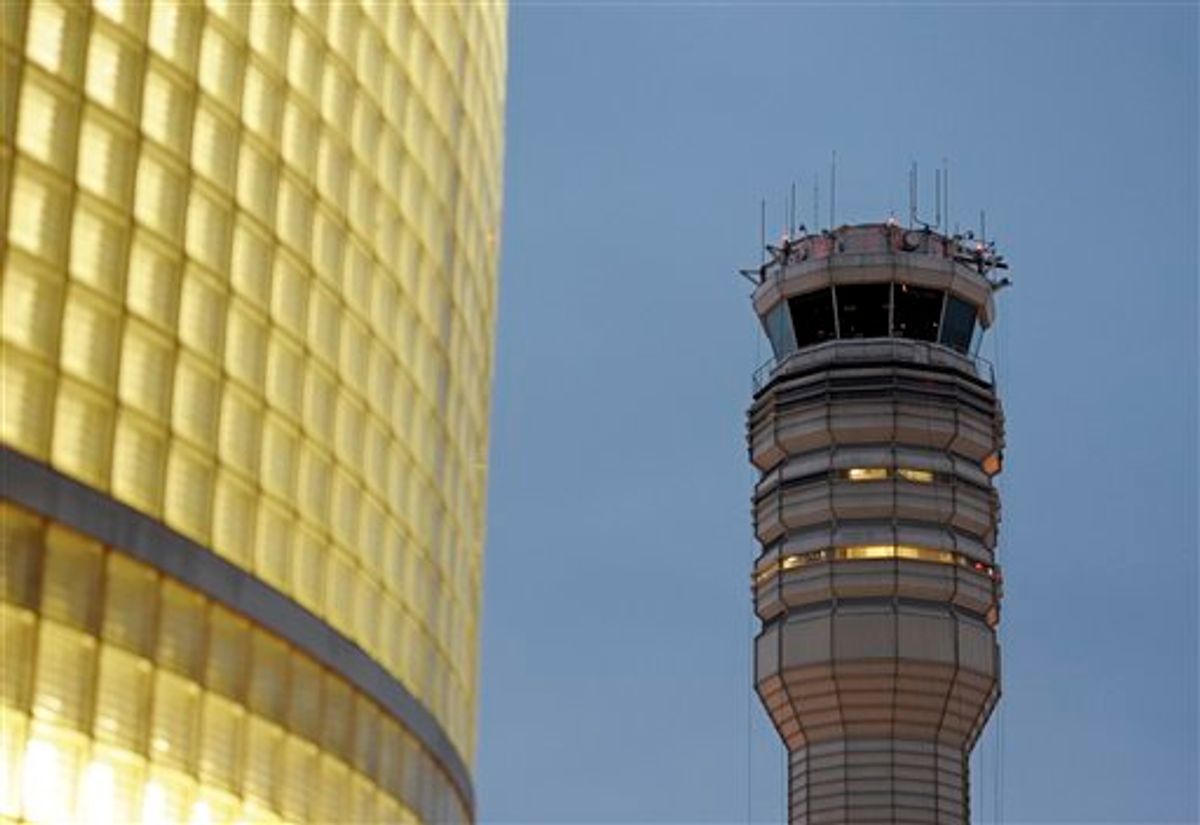 The FAA control tower at Reagan National Airport is seen in Arlington, Wednesday, March 23, 2011. Federal safety officials are investigating a report that two planes landed at the airport without control tower clearance because the air traffic controller was asleep. (AP Photo/Cliff Owen) (AP)
--

Everybody is asking me to comment on last week's drama at Washington's Reagan-National Airport, when a tower controller went AWOL, temporarily requiring crews to land without proper clearance.

Sorry for the delay in responding. I was kayaking in Palau. So, as it happened, three days went by before I found out about it.

Though, to be perfectly honest, this is a good example of the type of incident I loathe writing about. The nuances of air-to-ground communications, including the protocols for clearance and loss of contact with ATC, are fairly baroque and difficult to explain. People want to know: Was this a dangerous situation? The answer is sort of, maybe, it depends, probably not.

Don't get me wrong; the idea of a tower cab controller at a major airport falling asleep, locking himself out or otherwise failing to be where he needed to be is inexcusable and embarrassing. But, while this was a potentially serious breakdown, crews fell back on the established procedures for loss of communications and everything worked out fine.

What are those procedures? The full dissertation is a surefire cure for insomnia, trust me, so here's the short version: If a crew is unable to reach ATC, they will proceed via the last clearance received, including whatever routings and altitudes were assigned, or the clearance they expect. A captain can always exercise the right to emergency authority, deviating from any clearance or protocol to the extent that he or she deems suitable in the interest of safety; however, if a plane is on a published approach procedure toward a particular runway, nine times in 10 the safest course of action is to continue that approach and land on that runway. Several readers asked me why planes inbound to Reagan didn't simply redirect their courses toward Washington-Dulles or some other airport, and this is the reason. Which fixes would you be flying toward? At which altitudes? And so on. A flurry of planes all at once deviating without prior notification is a more confusing, and potentially more dangerous, scenario than those flights continuing as expected, with or without radio contact.

The trickiest part would be ensuring that the landing runway is clear of other planes. In good weather you can more or less see the runway and visually determine if and when it is safe to land. With clouds or fog it's not so easy. One fallback is for crews to communicate with each other over any open tower frequency. Pilots also can switch to one of the airport's approach, departure or ground-control frequencies and solicit them for assistance. An airport control tower is responsible only for traffic in the immediate vicinity of the runway complex. Taxiing planes are under the jurisdiction of ground control; departing planes switch departure control only seconds after liftoff; arrivals are handled by approach control until only a few minutes from touchdown. Ground controllers are often co-located with tower controllers and have a full view of the airport. Approach and departure controllers are often situated remotely, often many miles from the airport, but have telephone access to the tower or can otherwise provide a crew with valuable information about the location of other aircraft. (Open to debate is the wisdom of having but a single tower controller on hand at any point, even during off-peak hours when things are relatively quiet, but that's a topic for another time.)

Long and short: Few things are more terrifying than the prospect of a high-speed ground collision, and those planes in Washington would not have touched down if their crews were not absolutely certain that the runway was clear of traffic, believe me.

This is a good time, meanwhile, to bring up one of my biggest flying pet peeves: those occasions when, prior to landing, a flight attendant announces, "Ladies and gentlemen, we have been cleared to land. Please ensure your tray tables are stowed and all of your electronic devices ..." blah blah blah.

Truth me told, flight attendants do not have the slightest idea when the flight has been cleared to land. The public address chimes that precede this annoying announcement are a notification only that the plane will be touching down, well, soon -- it's nonspecific and fairly informal.

Actual landing clearance may take place many miles out or only seconds prior to touchdown, depending on circumstances. Either way, this is not something communicated between pilots and cabin crew -- ever.

Another one you'll hear is, "Ladies and gentlemen, we've begun our final approach ..." To a pilot, "approach" is a technical term referring to the execution of a published arrival pattern, and final approach is even more specific. Flight attendants use this term generically for convenience.

For the record, it is not true that a runway must be vacant for a flight to receive landing clearance. Airplanes are cleared to land all the time when arriving or departing flights are still on the tarmac ahead of them. It simply means they may go ahead and land on the assigned runway without further communications with the control tower. If the runway is not eventually vacant, the clearance will be canceled.