GOP candidate: No Muslims in my administration 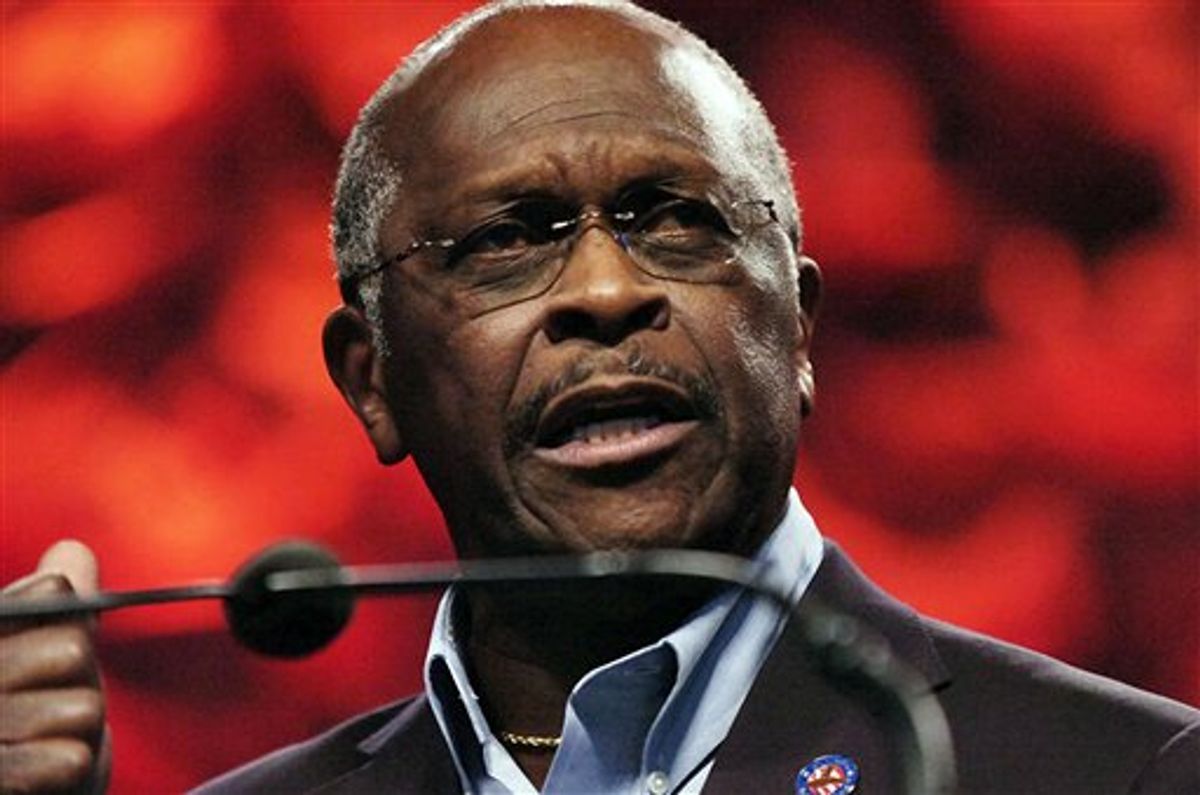 FILE - In this Sept. 18, 2010 file photo, Georgia businessman Herman Cain, who is edging toward a run for the White House, addresses a gathering in Hoffman Estates, Ill. The former co-owner of the Godfathers Pizza chain will join other potential Republican presidential candidates Monday at a forum in Des Moines. (AP Photo/The Arlington Heights Daily Herald, Mark Welsh) MANDATORY CREDIT (AP)
--

(UPDATED) Former Godfather's Pizza CEO Herman Cain is not a first-tier presidential candidate. He is, however, actively running, and he does have real support. He won a straw poll at the Conservative Principles Conference in Iowa over the weekend, and last month won another straw poll at a conference organized by a Tea Party group.

That substantial support makes it all the more remarkable that Cain told Think Progress' Scott Keyes over the weekend that he would not appoint a Muslim to his cabinet.

It's hard to interpret this exchange as anything other than straight-up bigotry:

KEYES: You came under a bit of controversy this week for some of the comments made about Muslims in general. Would you be comfortable appointing a Muslim, either in your cabinet or as a federal judge?

CAIN: No, I would not. And here’s why. There is this creeping attempt, there is this attempt to gradually ease Sharia law and the Muslim faith into our government. It does not belong in our government. This is what happened in Europe. And little by little, to try and be politically correct, they made this little change, they made this little change. And now they’ve got a social problem that they don’t know what to do with hardly.

Some of the more mainstream candidates -- including Newt Gingrich and Rick Santorum -- have already dabbled in anti-sharia rhetoric. But one wonders if they are now going to have to denounce Cain's comments.

I've reached out to Cain's campaign to see if he has any further comment on this, and I will update this post if I hear back.

UPDATE 3 p.m. In an interview just now, Cain spokeswoman Ellen Carmichael told me that Cain's beef is with sharia, not Muslims in general. "He has worked side by side with folks of all religions and all backgrounds. It is not an issue with all Muslims," she said.

Asked whether Cain stands by his statement that he would not appoint a Muslim to his cabinet, Carmichael said: "Mr. Cain would consider any person for a position based on merit, as anybody else would, as is the law." She added that Cain would ask of potential hires: "Does this individual believe the U.S. Constitution is the supreme law of the land?"

Citing his childhood in the segregated South, Carmichael also said it is ridiculous to suggest that Cain is a bigot.