Will Obama violate the arms embargo in Libya?

The administration suggests it may send weapons to the rebels, raising thorny legal questions 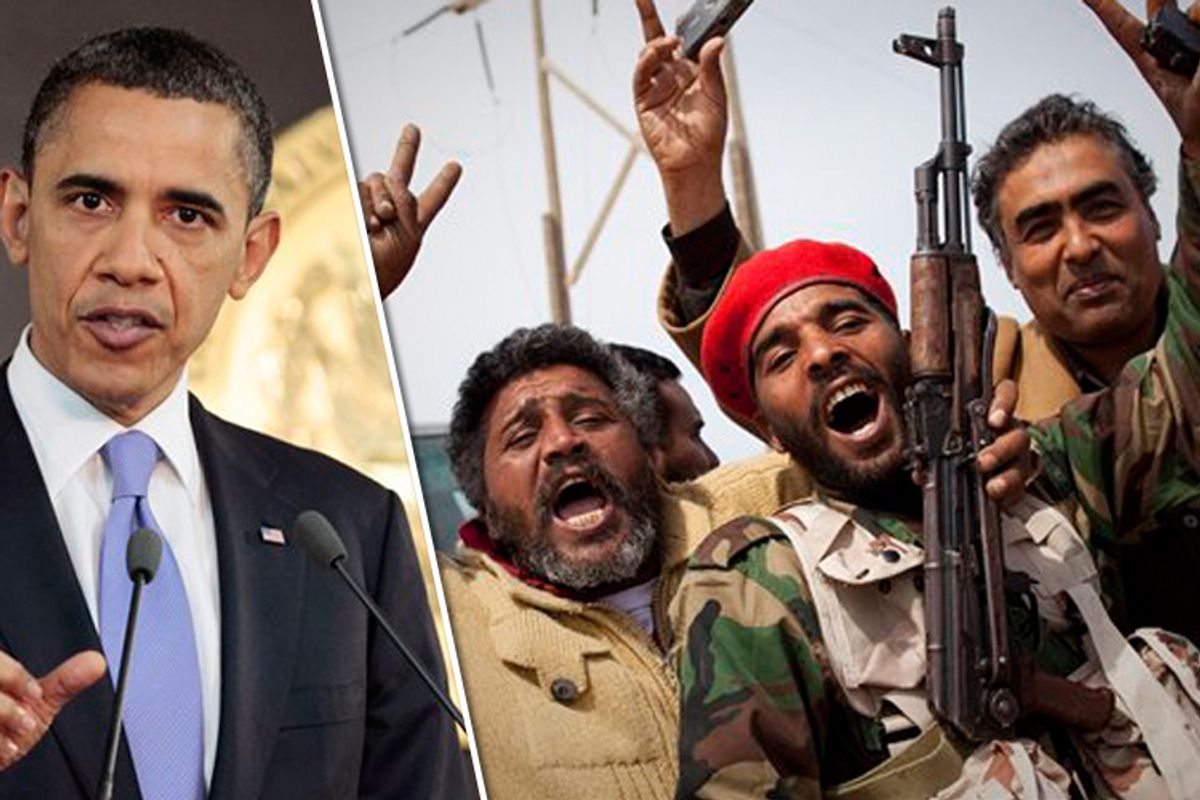 (UPDATED) The Obama administration is now openly talking about arming the rebels in Libya, raising the question of whether such a move would be legal given that there is a U.N. arms embargo covering all of the country. The answer: It depends on whom you ask.

The possibility of giving weapons to the rebels -- who, by all accounts, have mostly relied on small arms and American bombing in the fight against Gadhafi -- also shows that the mission in Libya may end up going far beyond the original concept of a no-fly zone.

Some observers, like the Atlantic's Max Fisher, have already pointed to the troubled history of the U.S. arming rebels in Afghanistan and Central America, places where rebel elements later turned on the U.S. or committed war crimes. That history is particularly relevant today given reports that there are Islamic extremist elements among the Libyan rebel coalition.

For a while now, hawkish Republicans like John McCain have been calling on the administration to arm the rebels (McCain even cited the experience of arming the mujahedin in Afghanistan in the 1980s as a good precedent). But only in the past few days has the administration openly talked about such a step. The ambassador to Libya said over the weekend that arming the rebels was a real possibility, and the White House press secretary asserted that it would be legal under the U.N. resolution providing for a no-fly zone over Libya.

While Resolution 1973 includes a section about tightening enforcement of the arms embargo, it also includes a clause -- reportedly inserted at the request of the U.S. -- that may create a loophole in the arms embargo. Here it is (emphasis added):

Authorizes Member States that have notified the Secretary-General, acting nationally or through regional organizations or arrangements, and acting in cooperation with the Secretary-General, to take all necessary measures, notwithstanding paragraph 9 of resolution 1970 (2011), to protect civilians and civilian populated areas under threat of attack in the Libyan Arab Jamahiriya, including Benghazi, while excluding a foreign occupation force of any form on any part of Libyan territory, and requests the Member States concerned to inform the Secretary-General immediately of the measures they take pursuant to the authorization conferred by this paragraph which shall be immediately reported to the Security Council;

Paragraph 9 of Resolution 1970 establishes the arms embargo. So the key questions appear to be: What does "notwithstanding" mean? And could the United States convincingly argue that arming the rebels -- who, remember, are engaged in an offensive against Gadhafi-held areas right now -- protects civilians in Libya?

Inner City Press reports that the U.S. pushed for that "notwithstanding" clause to be included in the resolution for a specific reason, one that had nothing to do with arming rebels:

A source in the room while Resolution 1973 was being negotiated said that US Permanent Representative Susan Rice explained that she needed the “notwithstanding” loophole for a situation in which the US might have to go in with weapons to save a downed pilot, and wouldn't want merely carrying weapons to violate the arms embargo.

In a press briefing on Saturday, White House spokesman Jay Carney had this exchange with a reporter, which seems to suggest that the administration believes there is "flexibility" in the U.N. resolution when it comes to arming rebels:

Q    Thank you.  I mean, assistance to the opposition -- you’ve ruled out, just to be clear, non -- military assistance, right?

MR. CARNEY:  Well, I'm not -- I think that we actually -- there was a few weeks ago a statement that the arms embargo prevented us from doing that, and in fact, there’s flexibility within that to take that action if we thought that were the right way to go.

I asked White House spokesman Tommy Vietor for more clarity on this issue, and he pointed to Carney's past statements as well as this comment by U.S. Ambassador to Libya Gene Cretz on Saturday:

I’m not going to get into internal discussions about whether we will provide arms or whether we won’t provide arms. I can just say that we’re having the full gamut of potential assistance that we might offer, both on the non-lethal and the lethal side, is a subject of discussion within the U.S. Government, but there has been no final decisions made on any aspect of that.

Vietor declined to offer any more explanation of the administration's view of the arms embargo.

NATO's view of the matter appears to differ from the U.S. interpretation. In a statement issued Sunday, NATO, which has now officially taken over enforcement of the U.N. resolution, said it has "moved swiftly and decisively to enforce the arms embargo and no-fly zone" and that "NATO is impartial in this operation. The U.N. Security Council Resolution applies to all sides." And NATO Secretary General Anders Fogh Rasmussen told CNN: "The U.N. mandate authorizes the enforcement of an arms embargo. ... We are not in Libya to arm people, but to protect people."

It's unclear whether the U.S. would need U.N. approval if it decides to arm the rebels. "The argument that the U.S. government will make is that the necessity to protect civilians by all means will supercede the arms embargo," says Steve Clemons, a senior fellow at the New America Foundation. He adds that the situation is a messy one, and "there's a chance that you could provide arms that could fuel a civil war or fuel another strongman."

Meanwhile, the lead Libya story in the Times includes this loaded paragraph:

The Security Council resolution, adopted 10 days ago, authorized a no-fly zone over Libya and “all necessary measures” to protect civilians. The coalition has interpreted the protection of civilians to include attacking Qaddafi forces. But the resolution also calls for an arms embargo that applies to the entire territory of Libya, which means that any outside supply of arms to the opposition is being done covertly.

The way that's written almost suggests that the Times knows something we don't. Could some nation already be arming the Libyan opposition?

UPDATE: I asked White House spokesman Tommy Vietor whether arming the rebels is allowed under the Security Council resolution. His response, via email: "It is."

It's also worth noting this unconfirmed report from the Wall Street Journal that Egypt has been arming the rebels with Washington's knowledge.