From free pens to elaborate three-course meals, Big Pharma is shameless about promoting itself. Sadly, it works 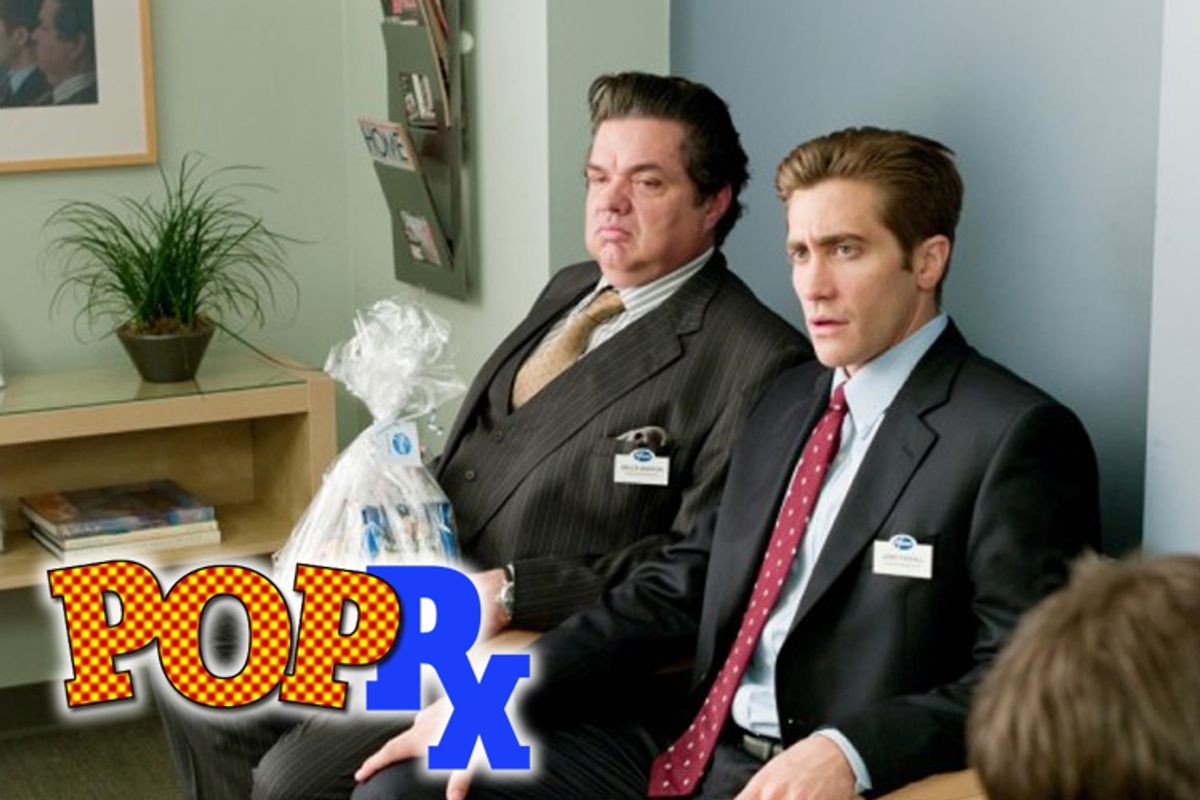 Early on in the movie "Love and Other Drugs," newly hired pharmaceutical salesman Jamie Randall (Jake Gyllenhaal) and his more seasoned partner, Bruce Winston (Oliver Platt), stand in a rainstorm outside a doctor's office. As a physician pulls into the parking lot, Winston gives Randall a pep talk to get out there, meet the guy and most importantly -- give him a pen.

Reciprocity. I get a drug-branded pen or trinket. In return, I feel obliged to let a drug rep into my office, drop off free samples, listen to a slick sales pitch as I hustle between patients and, ultimately, prescribe their drug.

My wife and I are both physicians, and we joke that we could decorate our whole house with junk collected over the years from drug companies. Pens and sticky notes; stuffed animals to put in our children's beds; coffee cups, tissue and soap dispensers, paperweights, posters, fridge magnets, mouse pads, clocks -- all branded with some drug company's logo. Giving out these freebies is just one tactic in the larger strategy of "drug detailing." Does it work? Absolutely.

According to the Pew Prescription Project, a project of the Pew Charitable Trusts, whose goal is to promote drug safety for consumers, the pharmaceutical industry spends about $7 billion a year on drug detailing. Jamie Reidy, who wrote the book "Hard Sell" about his days as a drug rep for Pfizer (and upon which "Love and Other Drugs" is based), described it like this: "An official job description for a pharmaceutical salesperson would read: 'provide health-care professionals with product information, answer their questions on the use of products, and deliver product samples â€¦ An unofficial, and more accurate, description would have been: Change the prescribing habits of physicians." Drug detailing allowed Reidy and nearly 90,000 other drug reps across the country to get into what he calls "The Promised Land": a doctor's back office.

Pens are just one form of currency used to accomplish that goal. Free lunches for a doctor and his office staff are another. (The Pew Prescription Project reports that Pharma rings up a $1 billion catering bill annually.) Another oft-used culinary tactic is the "educational dinner," where a drug rep hosts a physician hired by the company as a consultant to give a lecture that inevitably features the company's drug. The last one of these I went to was hosted by the drug company Eli Lilly in 2007. A respected psychiatrist gave a talk about attention deficit hyperactivity disorder (ADHD) and suggested over bottles of red wine and a three-course meal that the first drug of choice for the disorder was Strattera. In reality, Strattera was then and still remains a third- and even fourth-line drug for ADHD, behind stimulants like Ritalin, which have a long track record of safety and effectiveness.

Perhaps the slickest tactic I've heard about is when a drug rep convinces the doctor to grant him a "preceptorship." This is where the rep shadows the doctor during office hours to watch how and what he decides to prescribe. In the movie, Gyllenhaal's character dons a white coat and follows Hank Azaria's character (Dr. Stan Knight), prompting patients to believe he's an intern. In truth, I hadn't ever seen a drug rep try this. But Reidy's book illuminates the whole shady business, right down to the $500 Dr. Knight receives from Pfizer for doing it.

Social scientists have long known that giving someone a gift, however small, immediately establishes an obligation to give back. It might be the most effective tactic of persuasion known. The result of this and other drug detailing is pretty well-documented: cash for Pharma. The Journal of the American Medical Association reported that relationships between drug detailers and doctors led to reduced generic prescriptions, increased overall prescription rates, rapid uptake of the newest, most expensive drugs, including those of only marginal benefit over existing options with established safety records. As Reidy writes, following his own preceptorship, "all goals were met: rapport had been established (the pediatrician asked if I wanted to start playing tennis with him), and he showed an interest in using my drug. 'Hey, Jamie,' he yelled after me as I left the office, 'make sure you leave me a bunch of those Zithromax samples. I want to try that stuff.'"

The result of that backlash (and, of course, spiraling drug costs) has led doctors, drug companies and the government to establish some ground rules to curb the gift giving and exposure of attending physicians and residents to drug reps. Allan Coukell, a pharmacist and director of the Medical Safety Division at the Pew Health Group, told me some institutions have curtailed preceptorships, recognizing that there is no possible benefit to patients for a salesperson to observe their interactions with a doctor.

To try to gain ground, some institutions have implemented their own drug detailing programs (called "academic detailing"). The Veterans Administration Hospital in Palo Alto, Calif., educated providers about prescribing anti-hypertensive drugs that were in compliance with national antihypertensive medication guidelines. Five pharmacists were trained, like drug reps, in the techniques of academic detailing, and then went out to connect with physicians in the hospital. The results showed a significant decrease in "wrong" medications and a significant increase in scripts written for the right ones. Similar positive results have been found for the use of antibiotics and antidepressants.

The government has also become more involved. As part of last year's Health Reform law, drug and medical device makers will be required to publicly report payments and gifts they make to physicians. Prior to that, Minnesota, Massachusetts and Vermont had already taken steps to unmask the relationship between Pharma and doctors by publishing who is getting paid by whom on a public database. As a result, Minnesota (the first state to do this) found that psychiatrists who received at least $5,000 from drug makers wrote more prescriptions than those who received less or no money. Proof, again, that drug detailing works.

Since this provision doesn't start until 2012, we don't have any results to report. But it's hard to believe Pharma won't find loopholes for drug reps to exploit. Either way, it's worth knowing that if your doctor's pen has a drug's logo written on it, it may be more than just a pen.