The hideous sweat shirt I can't throw out

It has a teddy bear on it. It's old and frayed. And yet, it's what my mother wore as she struggled for her life 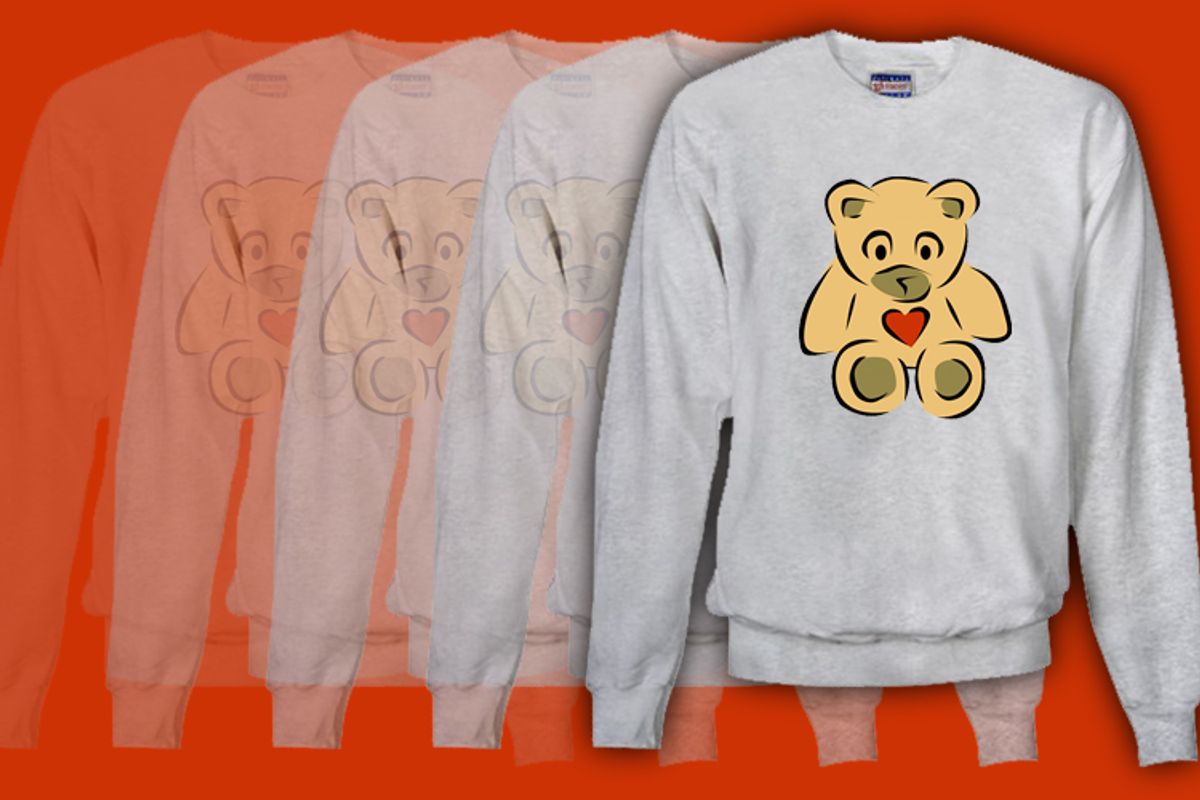 When I sold my deceased parents' small row home in Philadelphia and moved to New York 22 years ago, I took very little with me. My husband and I were beginning our marriage in hospital housing where he was a resident. He had already decorated the place with his leopard sofa, platform bed, kilim and an inherited mid-century desk. There was room for me in his heart, but not for my parents' rickety formica kitchen table.

I knew that once I settled in New York, I would become assimilated into his family -- a large, Jewish, Ivy League-educated, highly bonded collection of people with no shortage of opinions or emotions. By contrast, I had two brothers, each addicted to his own brand of drugs and a widowed sister. My mother had gotten as far as fifth grade; my father, who died of alcoholic cirrhosis, was a graduate of trade school. I was ready to move on and begin a new life with nothing but a stuffed suitcase.

Still, I wanted something besides photographs to remember my parents by. I found it in my mother's messy bureau -- a white sweat shirt, washed, worn, stained, with a tacky picture of a teddy bear under the words "I Am Loved." She had worn it frequently after her mastectomy noting how soft it was; she wore it after chemo when her skin had felt itchy and flushed. After she died, it became my father's official suit of mourning. He puttered around the house in it, sipped his beer and worked on the backyard roses. It was his way of holding on, which he could only manage for a few more years.

So when the time came for me to choose an item on the day I left, I took the sweat shirt to New York. Later I moved it from our small subsidized apartment to our larger rent-controlled one, and finally to our brownstone where there is more than enough space. Now, it's folded on a shelf next to Sephora shopping bags, designer scarves, above my daughter Isabelle's artwork.

Two months ago, when I was diagnosed with breast cancer, I took the sweat shirt down and considered trying it on -- just to see how it felt after the surgery. I placed it against my chest, regarded myself in the mirror. It wasn't just a reminder of Mom; it was a vestige of a time past when women like my mother weren't even offered the option of reconstruction.

I put the sweat shirt back in the drawer. Me, I am happy in my snug jog bra and a V-neck T-shirt, grateful I had only a small incision and a guarantee of long-term survival. But, if I ever need the shirt, I'll know where to find it.

Patricia Kenet is a writer and attorney based in New York City. She blogs at southphillyscribe.blogspot.com.