The failure of shareholder capitalism 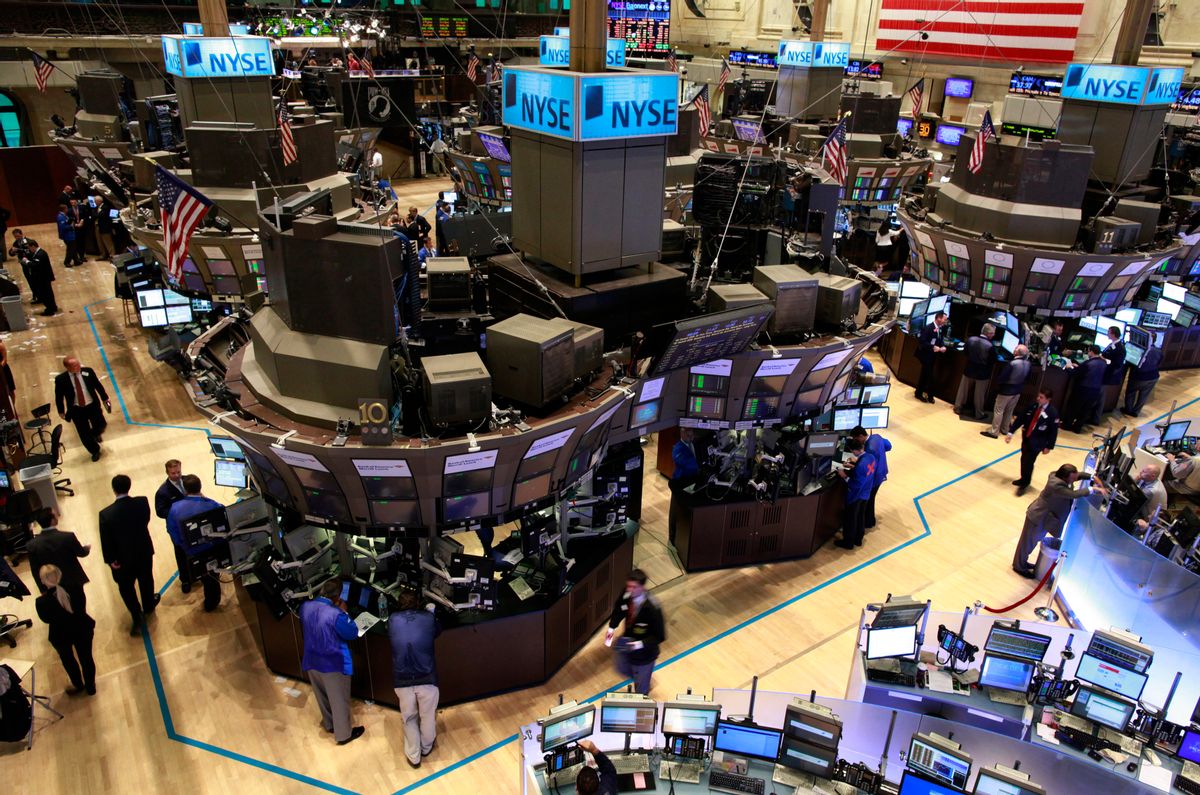 The verdict is in: The Thatcher-Reagan-Blair-Clinton model of capitalism is a failure.

By cutting taxes, slashing wages and destroying unions, the U.S. was supposed to lead the world in high-tech industry. But a recent study by the Asian Development Bank found that the majority of the added value of iPhones assembled in China come from high-tech companies in Japan, Germany and South Korea, whose inputs dwarf those from American companies. For a generation we've been told that the European and Asian capitalist countries were doomed by statism and high wages. Instead, they dominate global high-tech industrial production, while the U.S. continues to be deindustrialized.

Oh, well, who needs manufacturing, anyway? Let the rest of the world make things; we'll invent them and live off the royalties. Right? Wrong. The tech sector employers only a tiny number of Americans -- and offshoring the production of goods invented here will only shrink that number further.

Most Americans work in the nontraded service sector. In the last decade, as the economist Michael Mandel has pointed out, almost all of the new jobs have been created in health, education and government,  which share one characteristic in common: low productivity and rapidly escalating costs. The other big growth area, before the 2008 crash, was in the largely unproductive FIRE (finance, insurance, real estate) sector, where high salaries enticed smart young Americans who might have manufactured useful goods and services into manufacturing the toxic financial products that brought down the world economy. The homeland of Margaret Thatcher became even more dependent on a bloated financial sector than the over-financialized U.S.

Still not convinced that the Anglo-American model of the last generation is a failure? Orthodox economists recite the dogma that if productivity goes up worker compensation will follow. But according to the economist Alan Blinder in a Wall Street Journal Op-Ed titled "Our Dickensian Economy" last year, since 1978 productivity in the nonfarm business sector has grown by 86 percent, while real compensation -- wages plus benefits -- has grown only 37 percent. Take out the increased benefits, which tend to be eaten up by cancerous health insurance costs, and the real average hourly wage has not increased in 35 years.

Where have those missing gains from productivity growth gone? To a small number of rich American shareholders, CEOS and highly paid professionals, thanks to "shareholder capitalism."

Shareholder capitalism is the doctrine that companies exist solely to make money for their shareholders. It is frequently contrasted with stakeholder capitalism, which holds that companies exist for the benefit of their customers, workers and communities, not just for ever-fluctuating number of mostly remote and unengaged passive investors who just happen to own stock in them, often without even being aware that they do.

The rise of shareholder capitalism in the U.S. is often dated to an influential article in the Journal of Financial Economics in 1976, titled "Theory of the Firm: Managerial Behavior, Agency Costs and Ownership Structure" by Michael C. Jensen and William H. Meckling. They argued that shareholders should demand higher returns from complacent corporate managers. The idea of shareholder value was publicized by a 1981 speech in New York by Jack Welch, who had just taken over General Electric, and by Aflred Rappaport's 1986 book "Creating Shareholder Value."

The shareholder value movement sought to persuade corporate managers to ignore the interests of all stakeholders like workers, customers and the home country, other than shareholders. Granting CEOs stock options, in addition to salaries, was supposed to align their interests with those of the shareholders.

The theory had an obvious problem: Who are the shareholders and what are their interests? Most publicly traded companies have shares that are bought and sold constantly on behalf of millions of passive investors by mutual funds and other intermediates. Some shareholders invest in a company for the long term; many others allow their shares to be bought and sold quickly by computer software programs.

Unable to identify what particular shareholders want, CEOs with the encouragement of Wall Street have treated short-term earnings as a reliable proxy for shareholder value. According to shareholder value theory, breaking up a firm and selling its pieces might maximize shareholder value in the short run more than long-term investments that would not pay off for many years. So could shutting down factories in the U.S. and turning the American branch of a global manufacturing company into an importer and vendor finance company.

While the shareholder value theory had some influence in Europe and East Asia, it never displaced the stakeholder models of capitalism that exist outside the English-speaking world. As the Financial Times columnist Martin Wolf observes:

...[T]he idea that a company is an entity that can be freely bought and sold is culturally specific. It is the view, above all, of Anglo-Americans. It is not shared in most of the rest of the world. The reason for this divergence is that, for many cultures, a company is viewed as being an enduring social entity. I once read that, for many Japanese, one can no more sell a company over the heads of its workers than one can sell one's grandmother. In this view, goods and services can be bought and sold. Companies, like countries (or, as we all now agree, people), must not be.

Only in the English-speaking world, with its tradition of radical libertarian ideology, could a head of state like Margaret Thatcher declare: "There is no such thing as society." According to a 2007 article in the Journal of Business Ethics, 31 of 34 corporate directors, each of whom served on an average of six boards of Fortune 200 corporations, agreed that their duty to shareholders would require them to cut down a mature forest or allow a dangerous, unregulated toxin into the environment, if that increased shareholder value.

Because they never wholly accepted the shareholder value ideology, other capitalist nations have not seen fit to follow the Americans and British in steering most of the gains from economic growth away from workers to CEOs and shareholders. In Europe, average CEO pay is half the American level. The average European CEO makes 25 times as much as the average employee in the same company. The ratio in the U.S. is 100 to 1.

America's most dysfunctional industries have the best-paid CEOs. The U.S. spends twice as much on healthcare as other developed nations, with no better results, and the runaway cost of medicine in the U.S. is the biggest threat to the economy in the long run. And yet a Wall Street Journal CEO compensation study in 2010 found that healthcare CEOs did much better than their equivalents in more productive industries like energy, telecom and consumer goods.

The disproportion between the compensation of American financiers and their foreign equivalents is even more grotesque. In 2008 Jamie Dimon, the CEO of JP Morgan Chase, the world's fourth largest bank, was paid $19.6 million. Jiang Jianqin, the head of the world's largest bank, the Industrial and Commercial Bank of China, earned $234,000 -- 2 percent of Jamie Dimon's compensation.

Shareholder value capitalism in the U.S. since the 1980s has even failed in its primary purpose -- maximizing the growth in shareholder value. As Roger Martin, dean of the Rotman Business School at the University of Toronto points out in a recent Harvard Business Review article, between 1933 and 1976 shareholders of American companies earned higher returns -- 7.6 percent -- than they have done in the age of shareholder value from 1977 to 2008 -- 5.9 percent a year.

For his part, Jack Welch has renounced the idea with which he was long associated. In a March 2009 interview with the Financial Times, the former head of GE said: "Strictly speaking, shareholder value is the dumbest idea in the world."

We believe our first responsibility is to the doctors, nurses and patients, to mothers and fathers and all others who use our products and services....We are responsible to our employees, the men and women who work with us throughout the world....We are responsible to the countries in which we live and work and to the world community as well...We must be good citizens....and bear our fair share of taxes....We must maintain in good order the property we are privileged to use, protecting the environment and natural resources....Our final responsibility is to our shareholders....When we operate according to these principles, the shareholders should realize a fair return.