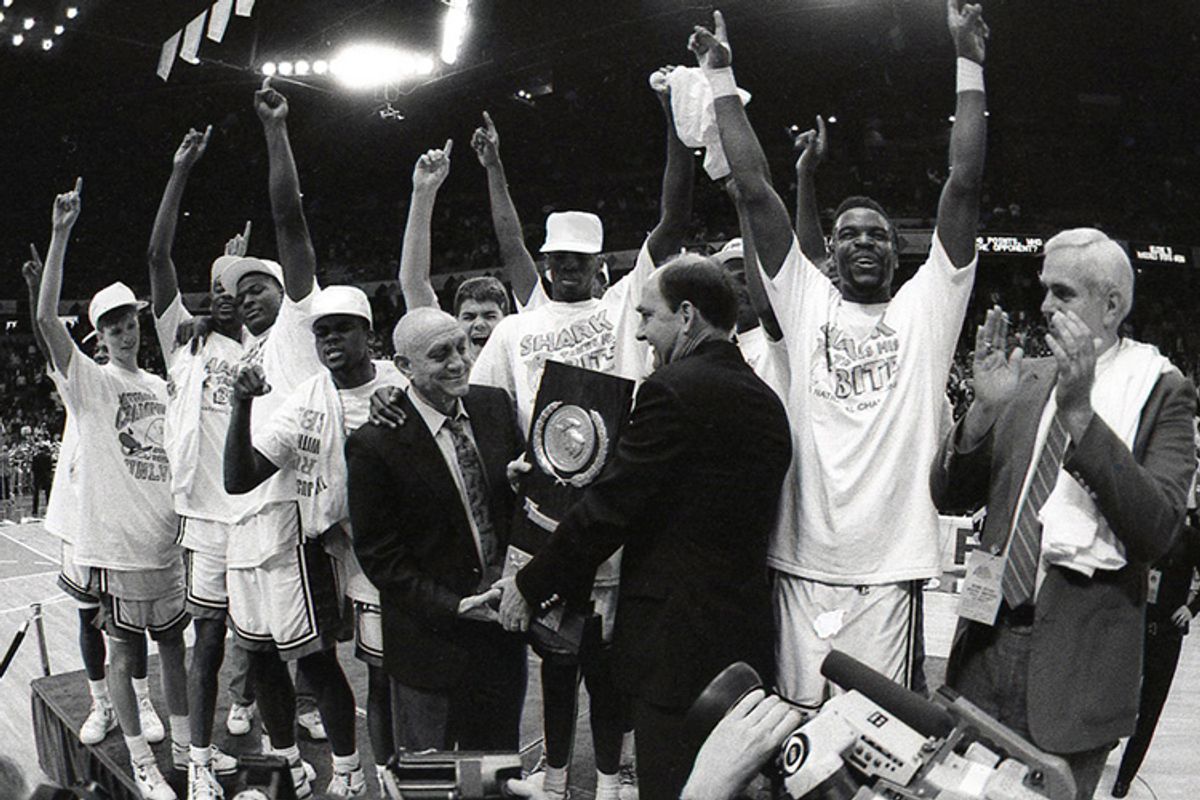 A still from "Runnin' Rebels of UNLV"
--

"There’s everywhere else," sang Frank, Sammy and Dino, "and then there’s Vegas."

But it wasn't a good city for big-time sports, not as the 1970s began, unless you just wanted to place a bet. There were no professional baseball, football or basketball teams for the locals to rally around. Then, in 1973, Coach Jerry Tarkanian came to the Runnin’ Rebels basketball team. As a new HBO documentary,"Runnin' Rebels of UNLV," explains, the University of Las Vegas, the city itself and college basketball would never be quite the same again.

"In the late 1970s," says comedian and talk show host Jimmy Kimmel, who grew up in Las Vegas, "I was in seventh or eighth grade and the Rebels were in the top 10 in the nation, and I remember thinking, ‘Wow, this is unbelievable.’ We didn’t have anything like that. We didn’t have an athlete to rally around.

The unlikely creator of the hottest ticket in Vegas for nearly 20 years, Jerry Tarkanian was born of Armenian immigrants in 1930 and had made a name for himself as a basketball coach at several colleges, particularly Long Beach State. When approached about taking the job at UNLV, which was derisively referred to as Tumbleweed Tech, he shrewdly perceived that though the program was unheralded, "They had the resources and they had the potential. I told my wife, ‘Lois, this is gonna be like a college town.’ She said, ‘Are you crazy? How could Las Vegas be a college town?’" Within a few short years, says Tarkanian, "It was harder to get a ticket to an UNLV game than it was to get in to see Frank Sinatra."

His philosophy was simple: Find the best players, whip them into peak condition, and inspire them into near fanatical intensity on both sides of the ball. Often the Runnin’ Rebels used no more than eight players in a game -- "The Hard Way Eight," as they were called -- and yet ran opponents into the floorboards. As former UNLV star Reggie Theus put it, "Coach Tark’s motto was: ‘We’re gonna play 40 minutes of nonstop pressure basketball.’ We’d sometimes scored 110 points a game -- and that was before they invented the three-point shot." Tark’s game wasn’t just offense: "A lot of our points were set up by mistakes our defense forced. We were intense on both sides of the ball."

In his first season, Tarkanian turned a moribund program around, winning 20 of 26 games. Bald and bespectacled, chewing a hand towel, he became perhaps the most recognizable coach in college hoops. UNLV games were Vegas-style events with the theme from "Jaws" greeting the team as they ran out onto the court with an enormous shark -- "Tark the Shark" -- hanging from the ceiling (with, of course, a towel clenched in its jaws). Wayne Newton, Don Rickles, Suzanne Somers and every celebrity who played the town was welcome courtside. Sinatra made calls to help Tarkanian recruit.

"Runnin’ Rebels of UNLV," narrated by Liev Schreiber, revives Tarkanian’s greatest teams in all their glory. The 1989-90 Rebels won the NCAA championship in a stunning 30-point drubbing of the Duke Blue Devils, the largest winning margin in Final Four history. The next season they became the first team in 12 years to go unbeaten but lost in the Final Four in a rematch with Duke.

Tarkanian’s greatest battles, however, were fought in the postseason with the National Collegiate Athletic Association, with whom he waged a fierce run-and-shoot war for nearly three decades. Before the start of the 1976-77 season, the NCAA put the Runnin’ Rebels on two years' probation for what they called "questionable practices," which occurred in 1971 before Tarkanian even came to UNLV. Nonetheless, the NCAA strong-armed the university into suspending the coach for two years. The feisty Armenian sued and won an injunction that reinstated him; the case went to the Supreme Court, which upheld the Nevada court’s decision.

The Rebels were slam dunked, though, in 1987 when prize recruit Lloyd Daniels was busted for buying crack cocaine. The incident ruined what might have been Tarkanian’s best team: The Runnin’ Rebels won 26 of 28 games, but were banned from postseason play. Tarkanian fanned the fires by writing articles blasting the NCAA. "You can’t beat the NCAA," says sportswriter Don Yaeger, author of "Shark Attack," about Tarkanian’s battles with the NCAA, "but you’ve got to hand it to Tark. He came closer than anyone else to fighting them to a standstill."

Tarkanian sued the NCAA for "trying to drive me out of college basketball." In 1998, while coaching for his alma mater, Fresno State, Tarkanian received $2.5 million in an out-of-court settlement.

"The Dynasty in the Desert," as it came to be known, ended in sensational fashion in 1992 after a photo of two UNLV players relaxing in hot tub with a notorious gambler known as "The Fixer" appeared in a local paper. UNLV president Maxson had had enough.

After a breathtaking 509-105 record under Tarkanian, the Runnin’ Rebels have never made it to the Elite Eight again. But Tark’s teams lit up college basketball with a neon pulse that still shines. Las Vegas historian Mike Green sums it up, "This is part of our image. It was a perfect match and a perfect storm."

("Runnin’ Rebels of UNLV" airs on HBO and HBO2 through March 31. The show is also available On Demand through April 11.)