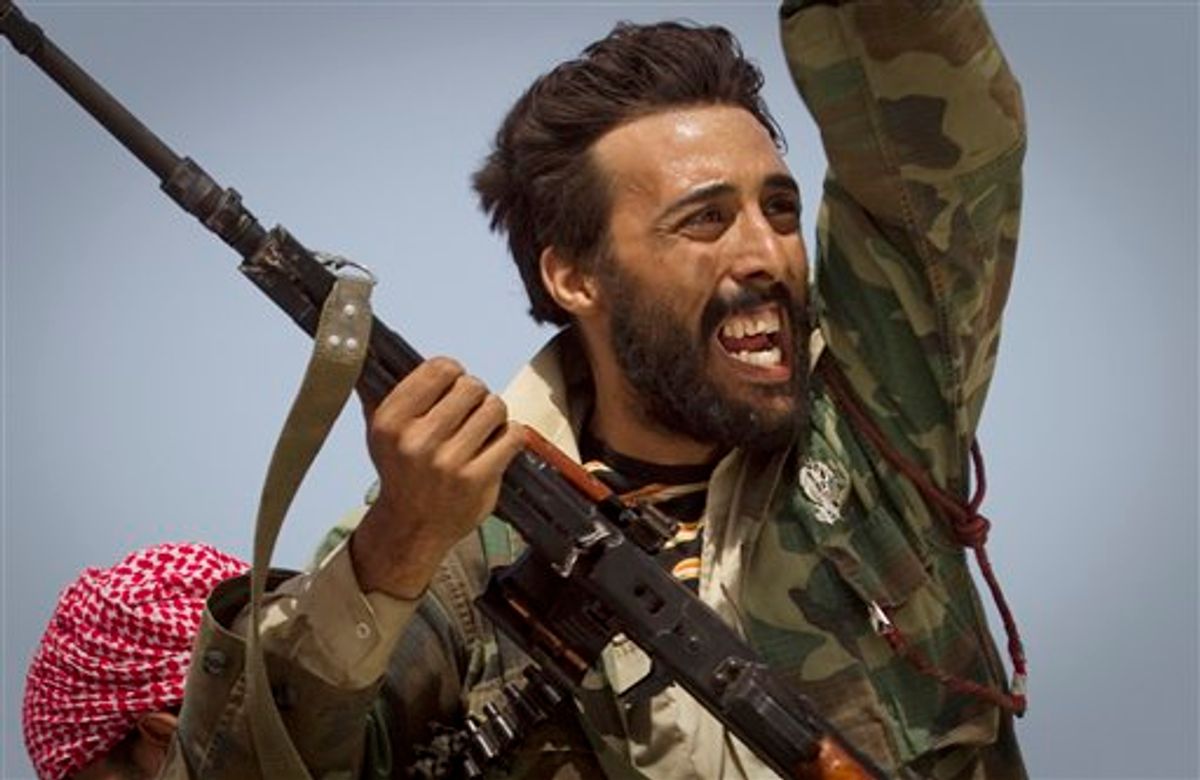 Libyan government tanks and rockets blunted a rebel assault on Moammar Gadhafi's hometown of Sirte on Tuesday and drove back the ragtag army of irregulars, even as world leaders prepared to debate the country future in London.

Rockets and tank fire sent Libya's rebel volunteers in a panicked scramble away from the front lines, before the opposition was able to bring up truck mounted rocket launchers of their own and return fire.

The latest rebel setback emphasizes the see-saw nature of this conflict and how the opposition is still no match for the superior firepower and organization of Gadhafi's forces, despite an international campaign of deadly airstrikes.

The two sides traded salvos over the small hamlet of Bin Jawwad amid the thunderous crash of rockets and artillery shells as plumes of smoke erupted from the town. The steady drum of heavy machine gun fire and the pop of small arms could also be heard above the din.

"There aren't a lot of us in Bin Jawwad right now," said Faisal Ali, a 20 year-old-rebel who had retreated from the town. "If (Gadhafi) has enough firepower and forces using tanks, he will surely take over Bin Jawwad," he added, noting that the rebels' special forces, one of their few trained units, had not yet retreated.

A U.N.-mandated no-fly zone and campaign of strikes by the U.S. and its allies helped rebel forces regain territory lost of the past week, when they were on the brink of defeat by government forces.

It is unclear, however, if the international support exists for the deepening of the air campaign to the wholesale destruction of Gadhafi's heavy weaponry that would be necessary

U.S. ambassador to the United Nations Susan Rice said Tuesday there are plenty of "non-military means at our disposal" to oust Libya's Moammar Gadhafi.

France, which has been at the forefront of the international campaign against Gadhafi in Libya, struck a more forceful tone, however, with the defense minister suggesting the strikes could go beyond their mandate of just protecting civilians.

"We, the French and English, we consider that we must obtain more" than the end of shooting at civilians, said Gerard Longuet on France-Inter radio. He also said Libyan politicians could be targeted since they gave orders to the military.

In London, U.N. Secretary-General Ban Ki-moon, U.S. Secretary of State Hillary Rodham Clinton, the Arab League, the African Union and around 40 foreign ministers were scheduled to join talks over the future of Libya and to ratchet up pressure on Gadhafi.

Italian Foreign Minister Franco Frattini said several nations planned to put forward a deal which would propose a cease-fire, exile for Gadhafi and a framework for talks, between Libya's tribal leaders and opposition figures, on the country's future.

In a sign of emerging ties between the opposition and the international community, a senior U.S. administration official said it would soon send an envoy to Libya to meet with leaders of the rebels.

The official said former U.S.-envoy to Tripoli, Chris Stevens, will travel to the rebel stronghold of Benghazi in the coming days to establish better ties with groups seeking to oust the longtime Libyan leader. The move doesn't constitute formal recognition of the opposition.

In an open letter to the international community, meanwhile, Gadhafi called for a halt to the "monstrous assault" on Libya and maintained that that the rebels were supported by the al-Qaida terrorist network.

"What is happening now is providing a cover for al-Qaida through airstrikes and missiles to enable al-Qaida to control North Africa and turn it into a new Afghanistan," he said, accusing the international community of carrying out genocide against the Libyans.

The rebels remain woefully outgunned by Gadhafi's forces and it is unclear how they can take the stronghold of Sirte without further aggressive international air support.

NATO has insisted that it was seeking only to protect civilians and not to give air cover to an opposition march. But that line looked set to become even more blurred. The airstrikes are clearly the only way the rebels bent on overthrowing Gadhafi are going to continue their push to the capital.

There was growing criticism from Russia and other countries that the international air campaign is overstepping the bounds of the U.N. resolution that authorized it. The complaints came at a critical transition in the campaign from a U.S. to a NATO command. That threatens to hamper the operation, as some of the 28 NATO member nations plan to limit their participation to air patrols, rather than attacks on ground targets.

Russia's envoy to NATO, Ambassador Dmitry Rogozin urged the alliance on Tuesday not to bomb Libyan ground targets when it assumes command of the campaign, saying NATO should restrict itself only to enforcing the arms embargo and the no-fly zone.

The rebel advance reached Nawfaliyah some 60 miles (100 kilometers) from Sirte on Monday, but the next day they were driven back to the hamlet of Bin Jawwad, a few dozen miles (kilometers) to the east.

In a scene reminiscent of the rebels' rout last week, panicked volunteers jumped into their pickup trucks and attempted to speed away from the bombardment, kicking up dust clouds and choking the narrow coastal highway in a mad scramble of vehicles.

Sirte is dominated by members of the Libyan leader's Gadhadhfa tribe and was used as a second capital by Gadhafi. It's loss would be a symbolic blow and open the way to the capital Tripoli.

"This is their last defensive line they will do everything to protect it," explained rebel fighter Twate Monsuri, 26. "It's not Gadhafi attacking us, he's just defending himself now."

Fighting in such a densely populated area is likely to complicate the rebels' advance and add to the ambiguity of the NATO-led campaign, authorized by a Security Council resolution to take all necessary measures to protect civilians.

The U.S. Navy reported that two of its aircraft and a guided missile destroyer attacked a number of Libyan coast guard vessels that were "firing indiscriminately" at merchant ships in the port of Misrata, rendering them inoperable.

One of Libya's top officials, meanwhile, abruptly made a "private visit" to Tunisia late Monday, according to the official news agency there.

Government spokesman Moussa Ibrahim in Tripoli insisted on Tuesday that Foreign Minister Moussa Koussa's visit was not a defection.