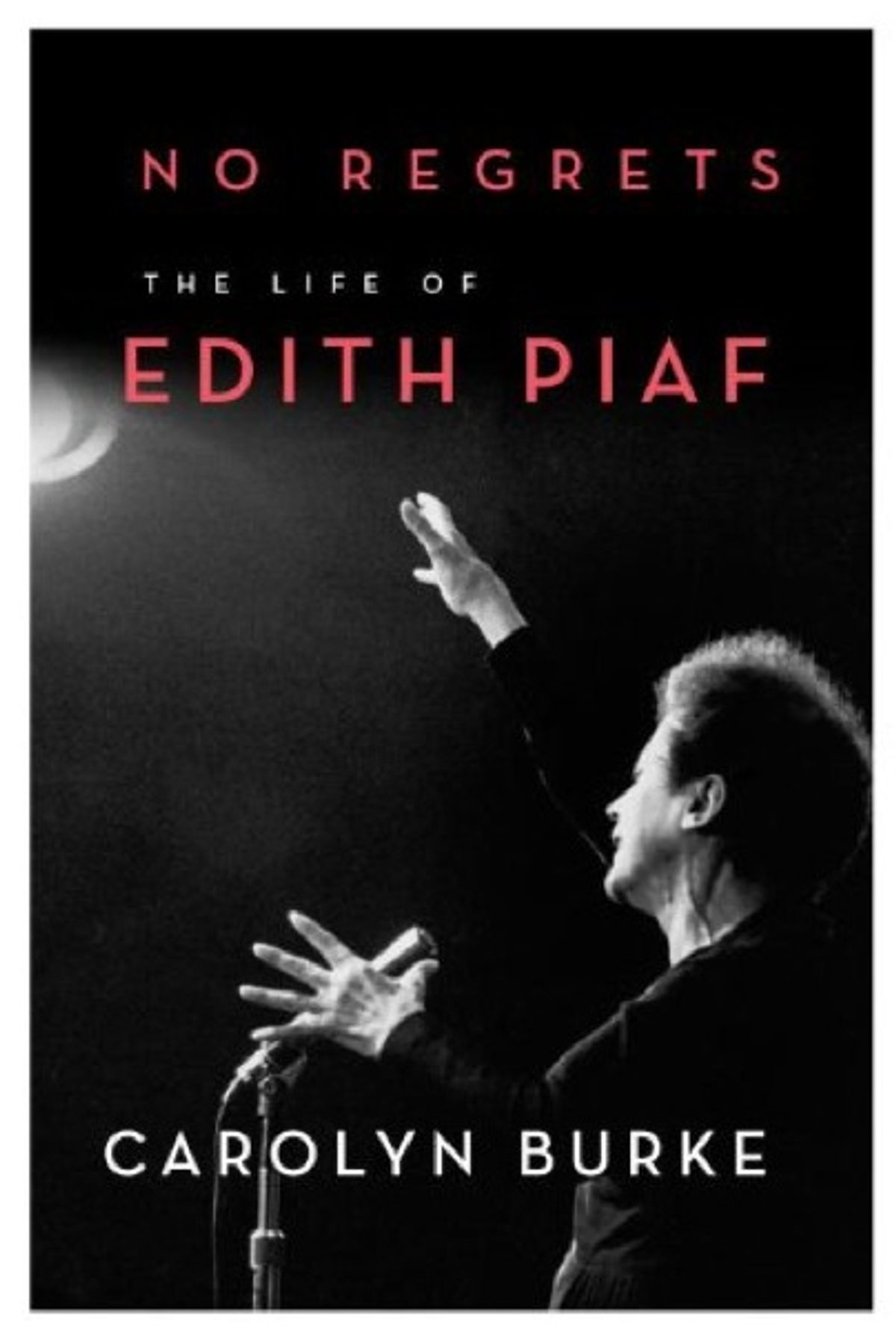 Edith Piaf, dead now for nearly 50 years, has become one of France's great national monuments, as lucratively exportable a product as Maurice Chevalier, Claude Monet and Crépes Suzettes. Everyone here in America knows Piaf, or at least they know the recordings of her two greatest hits -- "La Vie en rose" and "Je ne regrette rien" -- delivered in her yearning, metallic tones. Some even know the earlier numbers, chanson réaliste portraits, in the words of one pop culture critic, "of working-class life, gray with the soot of factory chimneys and abuzz with tunes picked up from bistrot radios." But not many Americans were familiar with the singer's tempestuous and dramatic life until the recent Olivier Dahan film, "La Mome" ("La Vie en Rose" in the United States), grabbed our attention, winning an Oscar for the lovely Marion Cotillard and awakening a new mode for all things Piaf.

The publication, now, of "No Regrets: The Life of Edith Piaf" by veteran biographer Carolyn Burke reveals that far from having been a bit too melodramatic (as I had thought "La Vie en Rose" to be when it came out a couple of years ago), the film omitted plenty. It almost had to: If even half of the singer's myriad lovers had made it onto the screen, audiences would have reeled in disbelief. Self-destructive stars, of course, are not unfamiliar to Americans, and we have become almost inured to their excesses: As I write, Charlie Sheen and Lindsay Lohan are playing out very public meltdowns. But the epic mess of Piaf's love life, as well as the scale of her talent, make this story something special, while her brutal Dickensian childhood virtually ensured that she would spend her adult life in a doomed quest for perfect love and security.

Burke has made a valiant effort to sift through the exaggerations of Piaf's two memoirs, "Au Bal de la Chance" (1958) and "Ma Vie" (1964), and the self-serving lies dished up by Simone Berteaut, Piaf's soul-sister and party-companion, in her own tell-all about the singer. The unadorned truth is already bizarre enough, with no need of embellishment.

The singer was born Edith Giovanna Gassion, in 1915 -- and not on the city pavement, as she claimed, but in the Tenon Hospital in Belleville, a working-class area in eastern Paris. (Burke imparts the remarkable fact that at that time, less than a century ago, the now-noisome quartier was still perfumed by the scent of blooming lilac.) Her father, Louis Gassion, was an acrobat (just 5 feet tall, he passed on his diminutive form to his daughter); her mother, Annetta, was a would-be singer whose own mother presided over a flea circus. As if this background wasn't disreputable enough, the feckless Annetta, an alcoholic and drug addict, abandoned the child when she was still a baby and went on to pursue an independent singing career under the name of Line Marsa. As in the vast majority of such cases, Edith never got over this primal rejection.

Louis Gassion was slightly more dependable. His own life was not stable enough to include a baby, so he took Edith to live with his parents in the town of Bernay in Normandy. Her grandmother, known as Maman Tine, was the manageress of what was euphemistically known as a maison de tolérance, essentially a whorehouse with legal standing. Petted by the unmarried "filles" of the establishment, Edith had a strange childhood, but one that was not without love, Occasionally her grandparents would take her to the Café de la Gare where they would stand the child on a table and let her sing to the assorted company. The power of her voice was already notable.

When Edith reached the age of 7 her father thought her old enough to become a professional asset, and he reclaimed her from his parents to take her on the road: The child would sing as a part of his circus act, the two of them traveling with a series of lady friends who attached themselves to Louis. "From her father," writes Burke, "she learned an entertainer's sense of timing, techniques for tugging on the audience's heartstrings, and the sort of patter likely to produce a good take." Some time during Edith's adolescence she returned with her father to Paris, where she began singing in cafes as well as in the streets -- and eventually in clubs as well, performing the chanson réaliste material that was being popularized at the time. Burke writes, "It was said of the best interpreters of this tradition -- Fréhel, Damia, and soon Piaf herself -- that they sang the way they lived, their songs came from the heart. (The extent to which they consciously sustained this perception went unnoticed.)"

The teenage Edith kept louche company in Pigalle, where she now settled -- if, indeed, "settled" can be said to be the right word. There she took up with Simone Berteaut, "Momone": a wayward 14-year-old girl whom Edith dubbed "ma mauvause génie," "my evil spirit." Over the decades Momone would be banished by countless men who tried to reform Piaf, only to be called back by the singer whenever she once again found herself alone. And almost inevitably the teenage Edith got mixed up with le milieu, the mafia that ran much of Paris' club and cabaret scene. During these years she usually had one or another "protector," some thug who made sure she was always incriminated in his felonies and helped himself to her meager wages. As Burke points out, "her life with her father had predisposed her to having a boss who took her earnings and dictated her behavior." At the age of 17 she had given birth to a baby girl, Marcelle, known as Cécelle. For a while the baby lived in digs with Edith and Momone, but soon the father came and took her away, saying that if she wanted the child she must come home. In a haunting reenactment of her own childhood tragedy she refused to do so, though she paid for the baby's care. Not long afterward, the 2-year-old was dead of meningitis; Edith, so the story goes, slept with a man to earn the money for the burial. The loss continued to haunt Piaf; she was never to have another child.

At the age of 19 Edith was "discovered" by Louis Leplée, proprietor of the club Le Gerny -- a swank establishment by Edith's standards. It was Leplée who picked out the simple black dress that would become her uniform for the remainder of her career, dubbed her "Piaf" -- sparrow -- and selected a réaliste repertoire of songs about the "dangerous" classes from which she sprang, works that would come to define her.  Other early mentors were the author Jacques Bourgeat, who urged her to educate herself, and the lyricist Raymond Asso, who became her lover, some say her Svengali. Piaf herself credited Asso with saving her life. "It took him three years to cure me. Three years of patient affection to teach me that there was another world beyond that of prostitutes and pimps. Three years to cure me of Pigalle, of my chaotic childhood ... to become a woman and a star instead of a phenomenon with a voice that people listened to as if being shown a rare animal at a fair." Asso also introduced her to the composer Marguerite Monnot, the woman who would become a close friend and her most important collaborator: Monnot's talent, she said, was "what helped me to be Edith Piaf."

Piaf's ascent was rapid at this point. Her next lover, Paul Meurisse, brought her to live with him in the beaux quartiers near the Arc de Triomphe and she never looked back: from then on, and as her fees reached stratospheric heights, she spent freely on high living in swell neighborhoods. Her entourage continued to expand: there were a few true friends among the crowd, but increasingly it was, in the words of one observer, "abject beings, people who amused her, pilferers, spongers, those who took her money -- a concept that simply didn't matter to her."

As for her many amours, there is probably no way they could be counted up, and Burke doesn't even make the attempt. Among the more significant were the composer Norbert Glanzburg, the very young Yves Montand, whose career Piaf actively promoted, movie star John Garfield, performer Eddie Constantine, bicycle champion André Pousse, singer Jacques Pills (a genial fellow to whom she was briefly married), lyricist Jo Moustaki (author, with Monnot, of Piaf's great song "Milord"), and the gorgeous Théophanos Lamboukas, gay and 20 years Piaf's junior, whom she married at a moment when "her romanticism won out over her sense of the ridiculous." The great love of her life, in her own opinion, was the boxing champion Marcel Cerdan, who died tragically in a plane crash in 1949 at the height of their romance. But considering Piaf's track record, Momone's cynical comment on the subject might not have been too far off: "If it had gone on another year," opined Piaf's mauvaise génie, "she might have dismissed him, like all the others." For Piaf made impossible demands on her lovers, many of whom (including Cerdan) were already married, and eventually either they burned out or she did. Her desire for love was insatiable, impossible; she simply asked too much of it.

Of course it was this yearning that permeated her voice and immortalized it. As one collaborator, the lyricist Henri Contet, put it, "Words and music are her beloved slaves. Miraculously they submit because of her passion. She loves them as much as the earth loves rain ... She sleeps with her songs, she warms them, she clasps them to her ... They possess her." During the triumphant years of her apotheosis she tore the heart out of her listeners: There are still people who remember the bliss of hearing her at the Versailles Club in New York just after World War II, when she seemed to embody a resurgent France. In later years, after Cerdan's death, she battled countless health issues and drug dependencies, but managed, right up to the end, to gear herself up to go onstage. Her great concert at the Olympia in Paris in 1960, at which "Je ne regrette rien" was introduced along with other songs by her new favorite songwriter, Charles Dumont, was a triumph of the will; only months before she had seemed on the brink of death.

Piaf's untimely death, in 1963 when she was only 48, occurred at a seminal moment in the history of popular music. Only a few months earlier the Beatles had leapt to international attention. In France, rock music was quickly elbowing aside the chanson tradition, though that tradition showed significant staying power: The new girl on the block was Juliette Gréco, with her existentialist chic, and Georges Brassens and Jacques Brel were drawing crowds in Paris clubs. Piaf may not now seem to have been a progenitor of rock, but French rockers have claimed her as their own, and Johnny Hallyday, now the eminence grise of French rock, has eagerly acknowledged her influence on his generation, "the young French singers who absorbed her powerful emotional style even when it seemed at odds with rhythms inspired by American rock, jazz, and blues." It is that powerful emotional style that grabbed listeners all over the world -- for in the end, as Burke concludes, Piaf's greatest love affair was with her audience.