Barack Obama: We're in Libya to prevent a massacre

The president explained, as best he could, why we're there, but couldn't quite explain how we'll know when to go 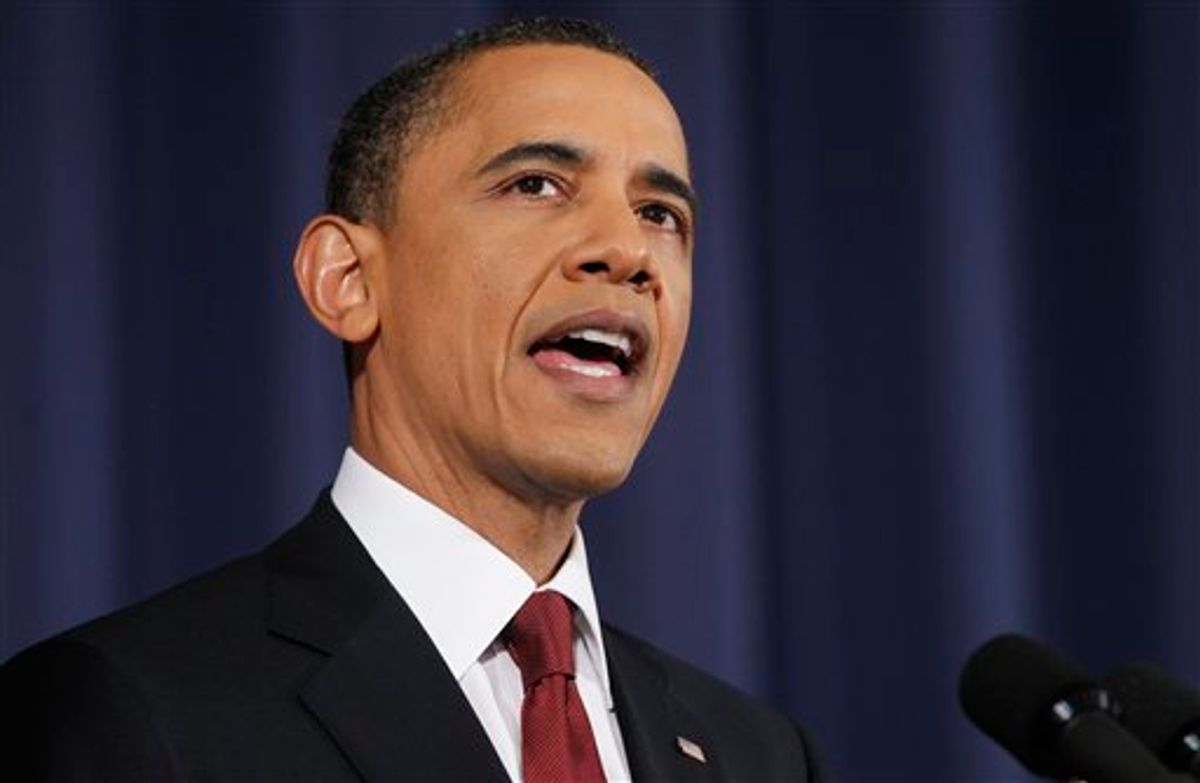 Shepard Smith was very skeptical going in to this speech -- he may be the only pundit worth watching on the Libya situation, because his skepticism is honest and not knee-jerk -- but he was waiting to be told, "why Libya." And Barack Obama answered that question, more or less. Whether or not it was convincing is up to the listener.

Obama first explained that our military is doing everything it's supposed to do in Afghanistan and elsewhere. We are not distracted. He went on to defend the time between the Libyan uprising and our strikes. What looked like "dithering," he wanted us to know, was actually a lot of behind-the-scenes action (asset-freezing!).

The big sell: "We knew that if we waited one more day, Benghazi – a city nearly the size of Charlotte – could suffer a massacre." Barack Obama did not want the United States to stand idly by while a truly horrific massacre took place. "And tonight," he said, "I can report that we have stopped Qadaffi's deadly advance."

Obama went on to actually list the allies in our "strong and growing coalition," which was not a good look and was perhaps the most Bushian element of the speech. (He forgot Poland.) And the president said he made the decision to intervene "after consulting the bipartisan leadership of Congress," which was the only nod to that institution in his address.

But Obama's job was really to hammer home the point that our actions prevented the deaths of, potentially, thousands of innocents. And he wanted you to know that not only was there precedent, but he actually acted decisively: "When people were being brutalized in Bosnia, in the 1990s, it took the international community over a year" to intervene." They decided to go in and do this in a month. (He didn't blame a news cycle sped up by 24-hour cable news networks, for once.) (And an obvious counter-argument presented itself: A longer amount of time might've given the mission more clarity.)

As for what's next, the president said the transfer from the United States to NATO will take place on Wednesday. And following that, we will deny Qaddafi his funds and generally "hasten the day" when he leaves. We want him gone, but our mission is not regime change. It is still our "goal," though: "While our military mission is narrowly focused on saving lives, we continue to pursue the broader goal of a Libya that belongs not to a dictator, but to her people."

So, we did this for the very good reasons listed earlier, and I promise we're done now. NATO will also bring down the cost to our military and "our taxpayers." We can't be World Police, but that can't be argument for "never acting." "In this particular country, Libya, at this particular moment, we were faced with the prospect of violence on a unique scale." And no American troops will be sent in.

Then the president carefully drew a distinction between this mission and the invasion of Iraq. In Libya, the opposition actively wanted us to intervene, the dictator was actively attacking his people, and the international community had all agreed that something should be done. If we'd just gone in with the regime change mission without international support or an existing opposition that welcomed us, the president explained, it would be Iraq all over again, which has lasted a long time, and been very expensive, and which has led to a lot of bloodshed.

The president reaffirmed his support for people yearning for freedom across the world. As Chris Hayes said, he did a good job with the "why," but failed to answer the real question of why he had the authority to do it and how and when we'll actually, in real life, end this campaign.

Conservatives who want him to broaden the war (why not Iran?) were probably unconvinced by his point about intervening only to prevent a directly impending massacre. Liberals and libertarians who dislike the idea of dropping bombs -- without Congressional approval, no less -- on a nation that poses no threat to us (and without a clear exit strategy) were almost certainly not convinced. But they weren't really expecting to be.

This was Barack Obama addressing skeptical "regular" Americans, not committed partisans and pundits. He was making this mission more like a '90s-style intervention than an indeologically motivated lengthy misadventure.

But his words matter less than our actions in Libya. If whatever this mission turns out to be is accomplished quickly and the end result is good for us, the people of America will be fine with it. And if it's a mess, it's a mess. I don't pretend to know what will happen.

The speech was on not at television prime time, but at a time that generally belongs to network affiliates. While I thought at first that that was because the White House didn't want to make this look like a proper presidential address about a proper war (it wasn't from the Oval Office and all that), but apparently that was just because ABC didn't want them preempting Dancing With the Stars. And the networks immediately cut to their regular programming. For some reason on NBC that involved Bill Clinton and George H. W. Bush listening to Kid Rock. It was... weird.