Questionable assertions about NATO's role, the scope of the mission and the moral justification for it 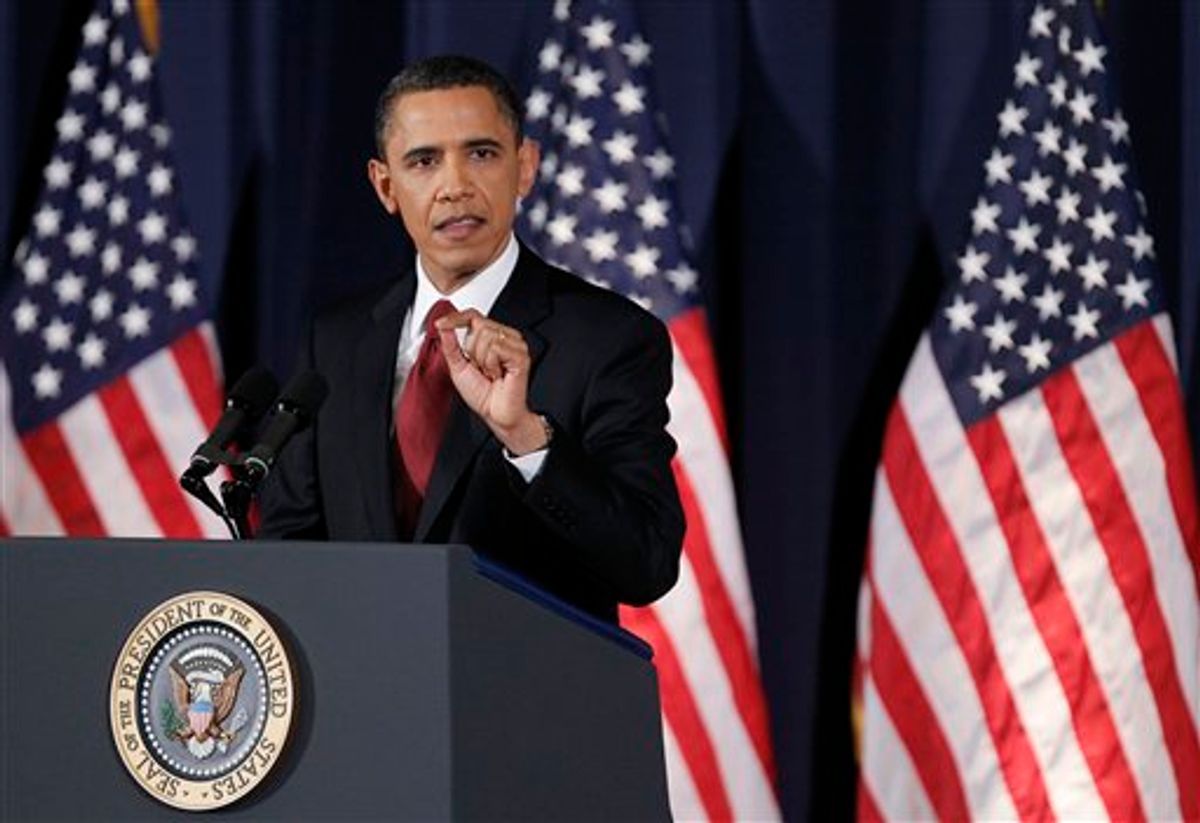 There may be less than meets the eye to President Barack Obama's statements Monday night that NATO is taking over from the U.S. in Libya and that U.S. action is limited to defending people under attack there by Moammar Gadhafi's forces.

In transferring command and control to NATO, the U.S. is turning the reins over to an organization dominated by the U.S., both militarily and politically. In essence, the U.S. runs the show that is taking over running the show.

And the rapid advance of rebels in recent days strongly suggests they are not merely benefiting from military aid in a defensive crouch, but rather using the multinational force in some fashion -- coordinated or not -- to advance an offensive.

Here is a look at some of Obama's assertions in his address to the nation Monday, and how they compare with the facts:

OBAMA: "Our most effective alliance, NATO, has taken command of the enforcement of the arms embargo and no-fly zone. ... Going forward, the lead in enforcing the no-fly zone and protecting civilians on the ground will transition to our allies and partners, and I am fully confident that our coalition will keep the pressure on Gadhafi's remaining forces. In that effort, the United States will play a supporting role."

THE FACTS: As by far the pre-eminent player in NATO, and a nation historically reluctant to put its forces under operational foreign command, the United States will not be taking a back seat in the campaign even as its profile diminishes for public consumption.

NATO partners are bringing more into the fight. But the same "unique capabilities" that made the U.S. the inevitable leader out of the gate will continue to be in demand. They include a range of attack aircraft, refueling tankers that can keep aircraft airborne for lengthy periods, surveillance aircraft that can detect when Libyans even try to get a plane airborne, and, as Obama said, planes loaded with electronic gear that can gather intelligence or jam enemy communications and radars.

The United States supplies 22 percent of NATO's budget, almost as much as the next largest contributors -- Britain and France -- combined. A Canadian three-star general was selected to be in charge of all NATO operations in Libya. His boss, the commander of NATO's Allied Joint Force Command Naples, is an American admiral, and the admiral's boss is the supreme allied commander Europe, a post always held by an American.
______________

OBAMA: "Our military mission is narrowly focused on saving lives."

THE FACTS: Even as the U.S. steps back as the nominal leader, reduces some assets and fires a declining number of cruise missiles, the scope of the mission appears to be expanding and the end game remains unclear.

Despite insistences that the operation is only to protect civilians, the airstrikes now are undeniably helping the rebels to advance. U.S. officials acknowledge that the effect of air attacks on Gadhafi's forces -- and on the supply and communications links that support them -- is useful if not crucial to the rebels. "Clearly they're achieving a benefit from the actions that we're taking," Navy Vice Adm. William Gortney, staff director for the Joint Chiefs, said Monday.

The Pentagon has been turning to air power of a kind more useful than high-flying bombers in engaging Libyan ground forces. So far these have included low-flying Air Force AC-130 and A-10 attack aircraft, and the Pentagon is considering adding armed drones and helicopters.

Obama said "we continue to pursue the broader goal of a Libya that belongs not to a dictator, but to its people," but spoke of achieving that through diplomacy and political pressure, not force of U.S. arms.
______________

OBAMA: Seeking to justify military intervention, the president said the U.S. has "an important strategic interest in preventing Gadhafi from overrunning those who oppose him. A massacre would have driven thousands of additional refugees across Libya's borders, putting enormous strains on the peaceful -- yet fragile -- transitions in Egypt and Tunisia." He added: "I am convinced that a failure to act in Libya would have carried a far greater price for America."

THE FACTS: Obama did not wait to make that case to Congress, despite his past statements that presidents should get congressional authorization before taking the country to war, absent a threat to the nation that cannot wait.

"The president does not have the power under the Constitution to unilaterally authorize a military attack in a situation that does not involve stopping an actual or imminent threat to the nation," he told The Boston Globe in 2007 in his presidential campaign. "History has shown us time and again ... that military action is most successful when it is authorized and supported by the legislative branch."

Obama's defense secretary, Robert Gates, said Sunday that the crisis in Libya "was not a vital national interest to the United States, but it was an interest."
______________

OBAMA: "And tonight, I can report that we have stopped Gadhafi's deadly advance."

THE FACTS: The weeklong international barrage has disabled Libya's air defenses, communications networks and supply chains. But Gadhafi's ground forces remain a potent threat to the rebels and civilians, according to U.S. military officials.

Army Gen. Carter Ham, the top American officer overseeing the mission, told The New York Times on Monday that "the regime still overmatches opposition forces militarily. The regime possesses the capability to roll them back very quickly. Coalition air power is the major reason that has not happened."

Only small numbers of Gadhafi's troops have defected to the opposition, Ham said.

At the Pentagon, Vice Adm. William Gortney, staff director for the Joint Chiefs, said the rebels are not well organized. "It is not a very robust organization," he said. "So any gain that they make is tenuous based on that."
______________

OBAMA: "Some nations may be able to turn a blind eye to atrocities in other countries. The United States of America is different. And as president, I refused to wait for the images of slaughter and mass graves before taking action."

THE FACTS: Mass violence against civilians has also been escalating elsewhere, without any U.S. military intervention anticipated.

More than 1 million people have fled the Ivory Coast, where the U.N. says forces loyal to the incumbent leader, Laurent Gbagbo, have used heavy weapons against the population and more than 460 killings have been confirmed of supporters of the internationally recognized president, Alassane Ouattara.

The Obama administration says Gbagbo and Gadhafi have both lost their legitimacy to rule. But only one is under attack from the U.S.

Presidents typically pick their fights according to the crisis and circumstances at hand, not any consistent doctrine about when to use force in one place and not another. They have been criticized for doing so -- by Obama himself.

In his pre-presidential book "The Audacity of Hope," Obama said the U.S. will lack international legitimacy if it intervenes militarily "without a well-articulated strategy that the public supports and the world understands."

He questioned: "Why invade Iraq and not North Korea or Burma? Why intervene in Bosnia and not Darfur?"

Now, such questions are coming at him.