How to ignore history, by Alan Greenspan

Catastrophic economic meltdowns happen, says the Maestro. But not very often, so why worry? 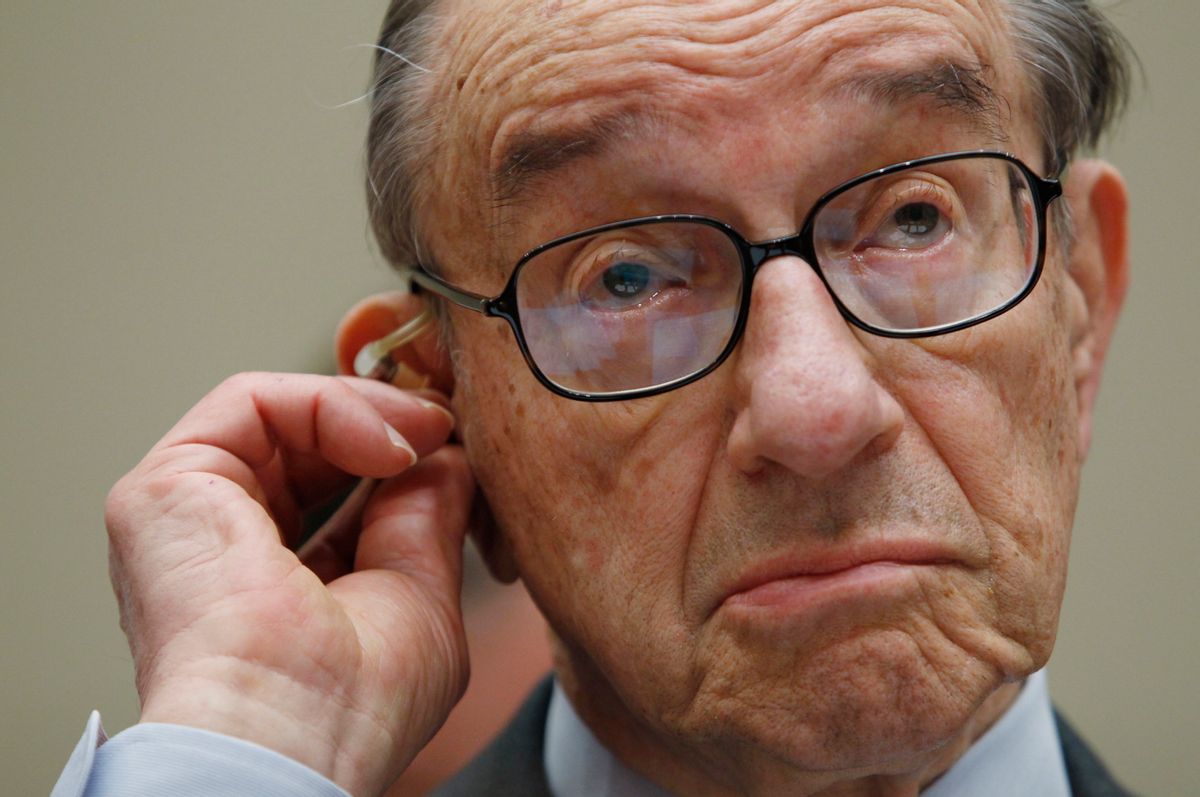 Former Federal Reserve Board chairman Alan Greenspan listens to opening statements as he testifies before the Financial Crisis Inquiry Commission hearing on Capitol Hill in Washington, April 7 , 2010. Making it easier for poorer Americans to get mortgages didn't push the country into crisis but Wall Street's drive to package the loans into opaque securities helped do so, Greenspan said on Wednesday. REUTERS/Kevin Lamarque (UNITED STATES - Tags: POLITICS BUSINESS IMAGES OF THE DAY) (Â© Kevin Lamarque / Reuters)
--

It's been five years since Alan Greenspan retired from his position as Chairman of the Federal Reserve, but the media and financial worlds still respond to every utterance from the "Maestro" with all the mindless kneejerk reflexivity of Pavlov's dog. And I write those words in the full knowledge that my own knee is jerking along with all the rest.

The pleasure of Greenspan outrage is simply impossible to resist. As Paul Krugman observes, Greenspan, "more than any other individual, bears personal responsibility" for the financial crisis, but here he is, in the Financial Times, arguing for the repeal of regulations designed to prevent future such disasters.

The gist of his argument appears to be that it is just too hard to regulate today's global economy. He failed, or, to use his own words, was "caught flat-footed" by the crisis, and therefore so will all future regulators. Greenspan has always been known for being a man of few, and very obscure, words, but his analysis explaining this reasoning includes an interlocution that will go down in history as one of the greatest examples of purposefully idiotic misdirection of all time.

The problem is that regulators, and for that matter everyone else, can never get more than a glimpse at the internal workings of the simplest of modern financial systems. Today's competitive markets, whether we seek to recognize it or not, are driven by an international version of Adam Smith's "invisible hand" that is unredeemably opaque. With notably rare exceptions (2008, for example), the global "invisible hand" has created relatively stable exchange rates, interest rates, prices, and wage rates.

The Interwebs are already having too much fun with that clause, so there's little need to belabor it here -- but feel free, if you so wish! Suffice to say, it should only require one global economic catastrophe that throws tens of millions of people out of work, threatens the entire  banking system with bankruptcy and destroys the finances of governments from Wisconsin to Portugal before we feel inspired to do a little tinkering with the rules that govern the financial sector.

But that's too easy. There are two other substantive parts of Greenspan's editorial that deserve attention. The first is his little list of unintended outcomes in the aftermath of the passage of something as complicated as the Dodd-Frank bank reform bill. For Greenspan, the fact that there have already been "regulatory inconsistencies whose consequences cannot be readily anticipated" is evidence, again, that we should never have dared attempt to master the unruly beast.

But I don't think any fair-minded person would be surprised that an undertaking as complex as bank reform (or healthcare reform, for that matter) would include kinks in the system. A responsible approach would be to treat reform as an iterative process. You try something, and then adjust as the situation warrants. If legislators of both parties were committed to the same goal -- a better regulated financial system -- we might even be able to make some progress. But when one side shrugs off recent disaster as a "notable exception" and immediately returns to its fundamental, bank-lobbyist mandated position, that regulation is bad for business, then incremental process becomes impossible. Republicans don't want to fix Dodd-Frank, they want to destroy it. Greenspan is giving them cover.

The second major thrust of Greenspan's editorial is his theory that higher levels of financial complexity are inextricable from rising standards of living.

Is the answer to complex modern-day finance that we return to the simpler banking practices of a half century ago? That may not be possible if we wish to maintain today's levels of productivity and standards of living. During the postwar years, the degree of financial complexity has appeared to grow with the rising division of labor, globalization, and the level of technology. One measure of that complexity, the share of gross domestic product devoted to finance and insurance, has increased dramatically.

So suck it up, America! If you want your flat-screen TVs, iPhones and organic gourmet food, you're going to have to accept unregulated derivatives trading and excessive Wall Street CEO compensation.

Oh, and the possibility of occasional massive financial disasters. At Marginal Revolution, Tyler Cowen produces a neat chart that track the GDP share of U.S. financial industry. And yes, it does rise steadily since 1940.

But it also rose steadily between 1880 and 1929, when it reached a height that would not be matched gor another 50 years.

Something happened right about then, but best not to dwell on it, because, after all, it's obviously just another one of those "notable exceptions" -- since it only happened once in the entire 20th century.