Durian: The King of Fruits is an angry king

Beloved in Southeast Asia, famously stinky, I've avoided the "King of Fruit" for decades ... until now 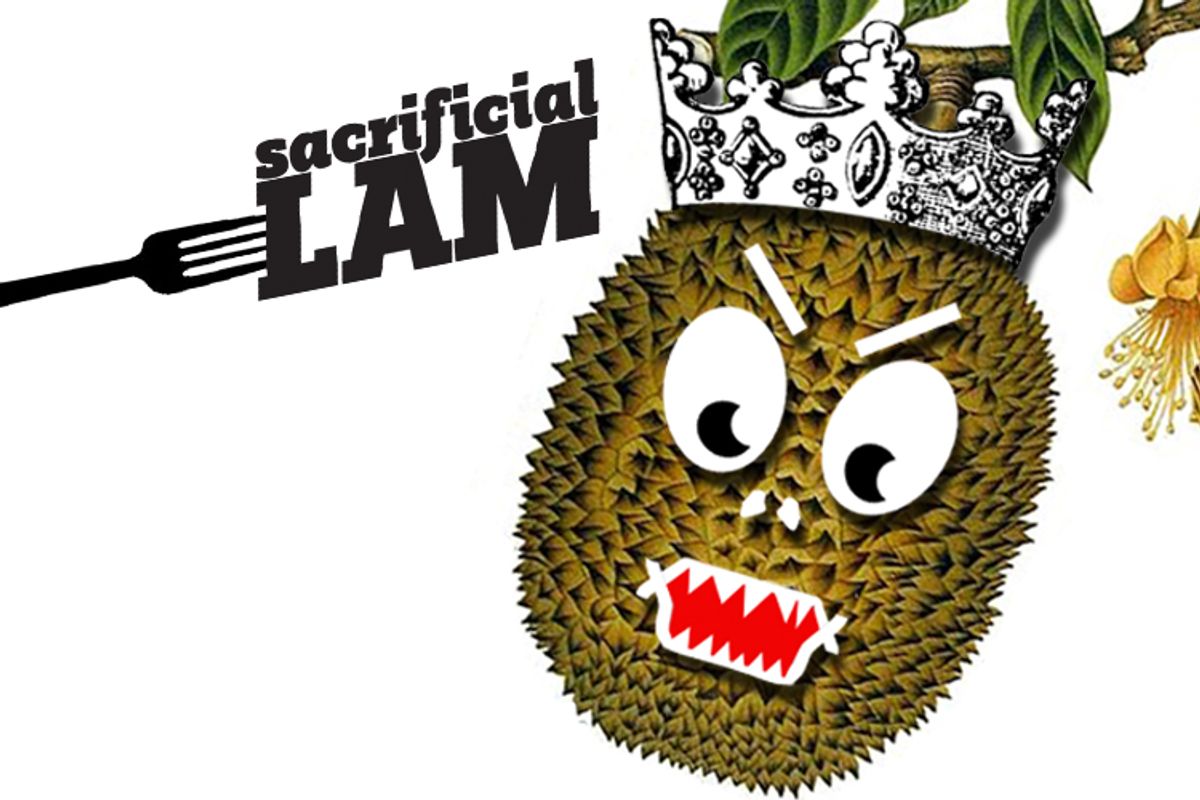 Durian. Oh, durian. You can't read anything about the heavy, spiky tropical fruit without finding out that "many people in Southeast Asia call it the King of Fruits," but who are these people? And, more important, why do we assume that the Fruit King is a kind and benevolent ruler, and not, say, a violent, power-mad, empire-obsessed tyrant? Because it is.

It's a fruit whose aroma is so strong, so lingering, so reportedly similar to a gym-full of old socks (if you're lucky) or an unearthed cadaver (if you're not), it pushes all else aside when it enters the room. You will know if there is a durian present, and sooner or later, no matter where you go in the house, it will have taken over.

And now I'm about to eat it.

I have, to be honest, avoided durian for years. I don't have many food hangups, but certain things stick with you, and my dad's wild-eyed terror of the stuff is so acute I developed a sympathetic fear of it myself.

My father, in very rare storytelling mode, once told me about visiting friends in Thailand. ("Dad, you have friends? In Thailand? That you visited?" I asked, incredulous. All I'd ever known of my dad is him either working, eating or sitting in front of the Internet, buying cases of nail clippers for really, really cheap on eBay. I guess this my family's version of the, "Son, when I was your age ..." talk.)

Anyway, he was at their place, trying to enjoy a dinner that was probably far too spicy for his delicate constitution, when dessert time came. Pleased beyond belief, the hosts hauled a fresh, ripe durian into the room, and the way my father described it, it was like there were vultures circling, dodging the ceiling fan blades overhead. They sliced the fruit open and offered him, the honored guest, the first sloppy plateful. Wanting to show his appreciation, he took a small bite. They urged him on, so he took another. And another. Only he couldn't bring himself to swallow it, and he just chewed and chewed, letting the durian sit in his mouth. Soon, Dad's head was a prison, an unholy combination of gasoline fumes and smushy rot. He excused himself to use the restroom, where his body promptly rejected the poisoning it thought it was taking.

It's hard to be the son of a man who's gone through that experience and look at a durian without wanting to punch it.

But now that -- thanks to a sadistic boss -- my own date with durian destiny is here, I quickly learned an important lesson: You do not want to punch a durian. The spikes are not for show, people. They are sharp, tough and for hurting you and any other animal not tough enough to rip the durian open, eat all the insides and carry its seed far, far away. And considering that the specimen I just bought is the size of a bowling ball and weighs a good 6 pounds, the mind boggles at the number of ways the durian can be weaponized, even before you get to its famous smell.

So what about that smell? Well, sitting there, unopened and threatening, the smell is actually quite mild and ... lovely. It's like a cantaloupe on vacation in the tropics. But when I plunged the knife in, the rest of Salon knew about it. "Oh, there it is," someone said, and by the time I split the fruit in two, gasps and groans were in the air.

And it wasn't just the smell, which was clearly assertive, like eggs and onions and a bit like cheese. It was also how it looked, which one person described as "anthropomorphic," and another as "anatomical," before the brilliant Drew Grant noted that it possessed a quality of "Cronenberg-ness." Gruesomely Naked Lunch it was, opened up to reveal white, bulbous soft flesh like brains, with a cut-open seed that looked like split bone or a gland or another animal part that you're really not looking forward to in a plant.

The first bite was also bizarrely, intriguingly and, yes, kind of disgustingly not like any fruit I've ever had. I dug in with a spoon, to find the durian jealously holding onto its custardy flesh. Cutting through fleshy fibers, I stole a mouthful and it was creamy, sweet and ... oniony. Sulfury. Thomas Rogers, who gamely stepped up for a spoonful of his own, was visibly disturbed. "It tastes like eggs," he said, and then nervously walked over toward the trash. I understood where he was coming from. As I chewed, the soft fruit giving way to a meaty chew, the flavor really, honestly, tasting exactly like creamed onions, my brain fought with itself. "This could be delicious with some salt and slathered on a burger," one lobe said. "This is supposed to be a freaking fruit, and that's just weird," the other shouted back. I had trouble getting it down. Plus, by now, someone else walked into the office and said, "Hey, you guys, it smells like a big [case of the vapors]."

The second bite was very different. Juicier, sweeter, much less oniony, it was inarguably pleasant. I really can't understand how creamy this stuff is, how rich like dairy, with a strong but soft sweetness, like coconut and melons. A third bite, though, and it was back to onion casserole land, and it seems that you have to kind of feel your way around the fruit to get a sense of where it's going to taste like tropical panna cotta and where it's going to taste like a burpy burger topping. Kerry, The Boss, was reaching for his water after a spoonful it looked like he'd enjoyed. "I did like it, but, uh, the aftertaste ..."

I don't know if I want that kind of uncertainty in a fruit, but as I put away the durian, I felt a sense of peace about it. Maybe I could learn to be its subject, or maybe I could just stay out of its way. But I felt no violence toward it, no hatred. I put it in the fridge and went toward my desk, when someone stopped me. "I hate to tell you this," she said, "but I think it's soaking into your clothes. It didn't smell here until you just walked by."