Do food dyes cause hyperactivity?

The FDA is questioning its own old claim that food coloring is harmless. But does that mean it's a villain? 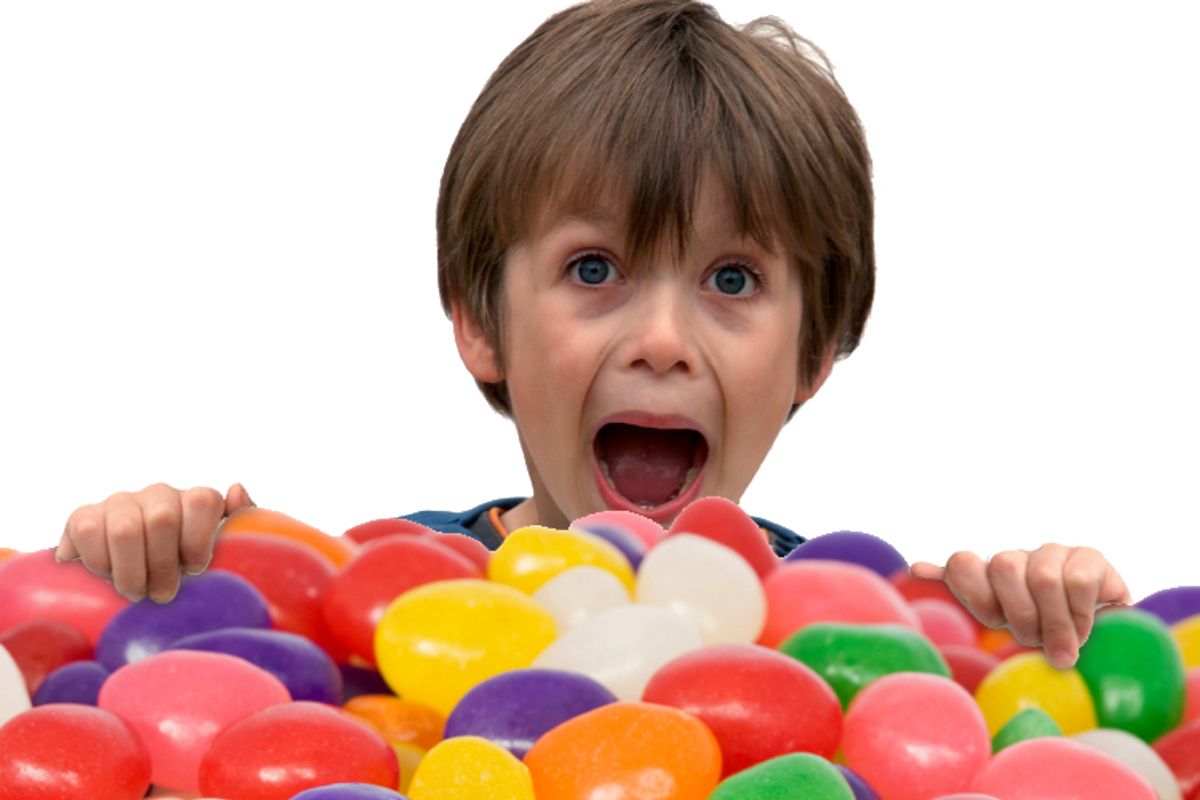 The Food and Drug Administration will hear a panel today to examine a possible link between artificial food coloring and hyperactivity in children. Though no one actually expects the FDA to ban the dyes, the panel provides a great opportunity for reporters to dig up hand-wringing parents ... and strike fear into the hearts of many more.

According to the New York Times, the petitioner, the Center for Science in the Public Interest, is seeking either an outright ban or, at the very least, a prominent warning label. European companies have had to put warning labels on artificially colored products for years, and many have switched to natural dyes, such as from beets. Should the U.S. follow suit?

The dye debate has been raging since the 1970s, with very little conclusive evidence to settle for either side once and for all. The FDA previously stated that there was no reason to fear the dyes, but since the use of artificial coloring has skyrocketed in recent years, scientists have been examining this claim, with little success. The most convincing evidence comes from a 2007 study headed by University of Southampton professor Jim Stevenson. In the study, children were fed a daily fruit juice containing different concentrations of dyes and the preservative sodium benzoate, and noted a small effect on behavior. It isn't clear whether the dyes, the preservative or the combination caused the effect.

Basically, scientists don't know what the cause of hyperactivity is, but children are still going cuckoo. FDA scientists released a report speculating that while many children are probably not adversely affected, those already with conditions like attention-deficit hyperactivity disorder (ADHD) may have their behavior problems exacerbated. In all probability, the two-day panel will conclude that it needs more research to reach any conclusions.

It's tempting, of course, to try to finger a culprit for a disorder that affects a large number of children, even if the science doesn't support it. Faced with uncomfortable ambiguity, the Times found a concerned mother to weigh in on the debate:

Renee Shutters, a mother of two from Jamestown, N.Y., said in a telephone interview on Tuesday that two years ago, her son Trenton, then 5, was having serious behavioral problems at school until she eliminated artificial food colorings from his diet. "I know for sure I found the root cause of this one because you can turn it on and off like a switch," Ms. Shutters said.

NPR's "Morning Edition," meanwhile, found its own worried mother of a hyperactive child to refute the claim. After her daughter used blankets to slide down the stairs, Christine Woodman adopted a familiar mantra:

"What is natural is good; what isn't natural was bad," she remembers.

On the advice of friends, Christine decided to start by cutting out foods with artificial coloring, but Dawnielle didn't really go for it. She missed her favorite oatmeal with little red-colored dinosaurs in it. Christine tried a substitute. "You know, I made the oatmeal with blueberries and soymilk and thought you would be happy with it," she says to Dawnielle.

For Dawnielle, however, the problem was only solved once she was diagnosed by a doctor and given Ritalin.

So, despite the media's best efforts, even the anecdotal evidence is inconclusive.

However, this doesn't mean that we should ignore the dye debate entirely. As the director of the Center for Science in the Public Interest, Michael Jacobson, pointed out, regardless of the health risks of the dyes themselves, they exist primarily to lure children to junk foods saturated with sugar -- a substance known to stimulate hyperactivity in pretty much everyone:

"Dyes are often used to make junk food more attractive to young children, or to simulate the presence of a healthful fruit or other natural ingredient," Jacobson said. "Dyes would not be missed in the food supply except by the dye manufacturers."

Even so, the dyes alone are not the main attraction. Sure, kids might enjoy the rainbow hue of Lucky Charms cereal, but we all know they're really in it for the marshmallows, no matter what color they are. Ultimately, artificial dyes are the media's hot new distraction from the real target. Eliminate dyes, and you're still left with highly processed, sugary foods that pretty clearly increase your child's hyperactive behavior. They'll just be a little less colorful.