Why the Christian right is backing a brutal despot

An Ivory Coast leader accused of widespread human rights abuses finds a pocket of support in the U.S. 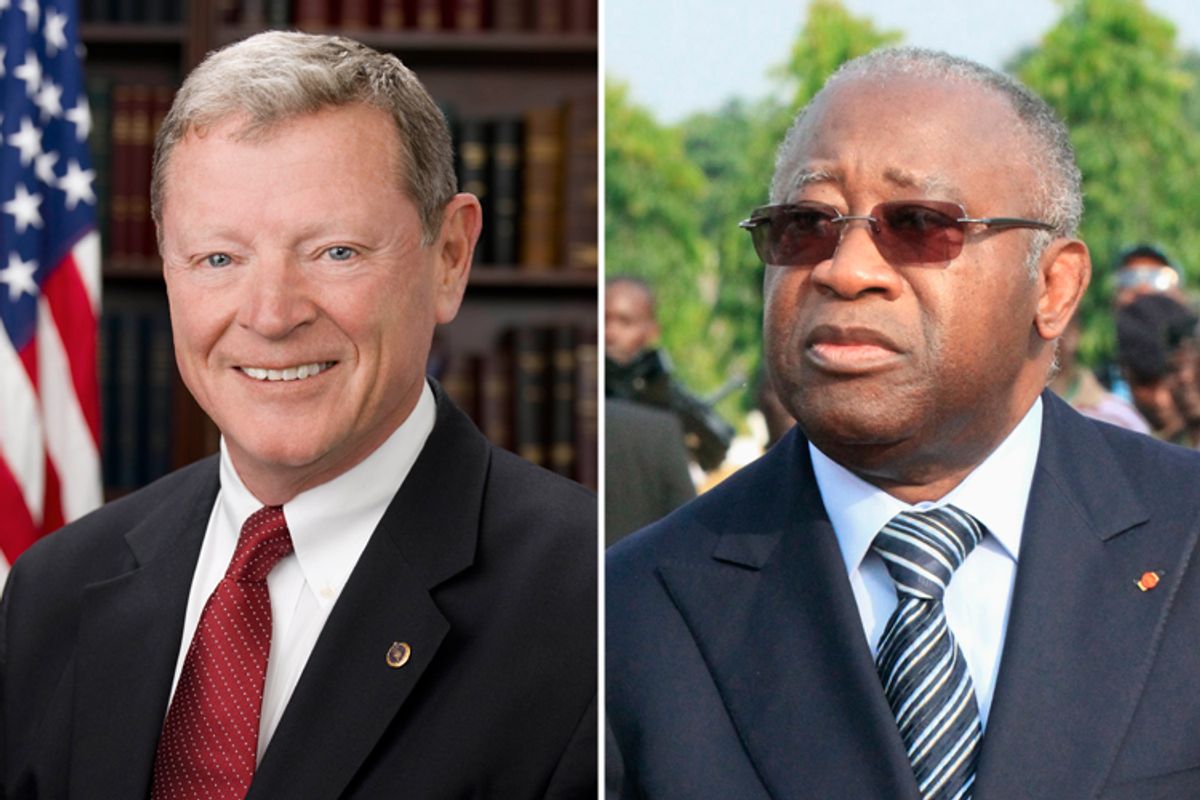 The west African nation of Ivory Coast has been in turmoil ever since incumbent leader Laurent Gbagbo refused to step down after losing an internationally certified election in late November. As forces loyal to Gbagbo have killed civilians and been accused of crimes against humanity, and as the number of refugees from the country has ballooned to as many as 1 million, observers have described the situation as worse than the Libyan conflict.

While the crisis has gotten substantial press attention, one aspect of Gbagbo's past -- and present -- has flown under the radar: his longtime ties to the Christian right in the United States, a movement in which he still finds at least some support.

That includes a U.S. senator and acquaintance of Gbagbo who declined to intervene in the crisis when asked by the State Department earlier this year, a former congressman who was hired by Gbagbo as a lobbyist, and a Christian right TV network that ran a fawning profile of Gbagbo, even as violence engulfed Ivory Coast. The senator, Jim Inhofe of Oklahoma, today released a letter to Hillary Clinton calling for new elections in Ivory Coast, putting him in direct opposition to the view of the Obama administration, the United Nations and the African Union that Gbagbo lost a fair election.

Gbagbo, along with his influential wife, Simone, are evangelical Christians who are known for lacing their speeches with religious rhetoric. "God is leading our fight. God has already given us the victory," Simone Gbagbo, who is both first lady and politician in her own right, said at a rally in January. Both Gbagbos have attended the National Prayer Breakfast, a big annual Washington event run by the secretive Christian group known as the Family, or the Fellowship.

The Fellowship, founded in 1935, cultivates relationships with people in positions of power in both the United States and abroad (it has long been active in Africa) to promote conservative evangelical values. It has drawn controversy for, among other things, running the C Street House, where several members of Congress live, and its ties to proposed legislation in Uganda that would provide for the death penalty for the "crime" of homosexuality.

Gbagbo's backing from the Christian right has come from a few sources, some of which share a common link to the Fellowship. The reasons for the support are not clear, though it may have to do with both long-standing relationships between Gbagbo and evangelicals active in Africa, and the fact that Gbagbo is Christian and his opponent, Alassane Ouattara -- the internationally recognized president of Ivory Coast -- is Muslim.

Chief among Gbagbo's American supporters is Inhofe, who is the most influential Republican in the Senate when it comes to African affairs. Inhofe has been traveling to Africa regularly since the late 1990s and, while the trips are paid for by the taxpayer and typically involve some official business, the senator also engages in missionary work. He has been to Ivory Coast nine times and knows Gbagbo personally. That's why, early on in the post-election crisis, when the State Department was frantically looking for intermediaries to reach out to Gbagbo to try to convince him to leave the country peacefully, the Obama administration asked Inhofe to talk to Gbagbo. But, according to a source familiar with the situation, Inhofe declined to do so.

It's still not entirely clear why Inhofe wouldn't help at a moment when it might have made a real difference; I've asked his spokesman for comment. But a letter to Hillary Clinton released by his office today offers some clues. In it, Inhofe explicitly takes Gbagbo's side in the election dispute -- even though all international observers and election monitors say that Gbagbo lost.

Inhofe writes: "From all the evidence I now have gathered, I am convinced that it is mathematically impossible for President Gbagbo to have lost the election by several hundred thousand votes." The senator goes on to call for new elections.

The other wrinkle in all this is that Inhofe and Gbagbo share a connection to the Fellowship. Inhofe has said that he began taking his missionary trips to Africa at the request of Doug Coe, the so-called stealthy Billy Graham who leads the Fellowship. Ivory Coast has long been one of a handful of African countries that is "of special interest" to the Fellowship, according to Jeff Sharlet's book about the group.

Inhofe's director of African affairs, who accompanies the senator on his trips to the continent, is also a missionary. And the senator has spoken of visiting presidents of countries including Ivory Coast in order "to meet in the spirit of Jesus." That religious relationship may help explain Inhofe's support for Gbagbo in the current crisis.

But it's not just Inhofe. Another Christian right politician, former congressman Bob McEwen of Ohio -- who has also been a longtime participant in the National Prayer Breakfast -- recently worked as a lobbyist for Gbagbo. In December, McEwen was hired at a rate of $25,000 per month to assist the Ivorian ambassador to the U.S. "in exerting his influence in the most strategic way possible," according to lobbying records.

I asked McEwen, who does not lobby for any other foreign governments, how he came to work for the Gbagbo regime. "I was a member of the intelligence committee," he said. "There are not too many places in Africa I haven't been. So I'm knowledgeable of the issue and what's going on." Despite allegations of human rights abuses, McEwen still supports Gbagbo, calling the current crisis "a coup in progress" by Gbagbo's opponents. He believes the international response is driven by French financial interests in the country.

McEwen said he has not met either Gbagbo or his wife at the annual prayer breakfast. He is no longer working on the Ivory Coast account because, he says, the Ivorian ambassador he was working with was forced to leave the United States.

Gbagbo has also found support in right-wing Christian media. Pat Robertson's Christian Broadcasting Network has run multiple pieces supporting Gbagbo. A CBN reporter even traveled to Ivory Coast to look into claims of voter fraud and to conduct a friendly interview with Gbagbo, who is portrayed as a pious man deserving of admiration.

"Everybody says this man is an evil thug who needs to go," said Robertson introducing one segment in January. "That's not true. He's a Christian, he’s a nice person, and he's run a fairly clean operation in the Ivory Coast." Robertson later pointedly noted that the U.N. is "controlled so much by Muslim countries."

The CBN reporter, Gary Lane, also wrote a lengthy blog post comparing the Ivory Coast situation to the Bush-Gore case in the U.S., with Gbagbo in the role of Bush and his opponent as a recalcitrant version of Gore.

The situation in Ivory Coast is moving quickly, with news breaking today that Gbagbo's opponents now control several key cities. But now that Inhofe is publicly calling for a change in U.S. policy, don't be surprised if we now see another burst of pro-Gbagbo sentiment coming from people like Robertson and others on the Christian right.