Seawater near Fukushima Daiichi power station testing at highest levels yet; plant to be scrapped after crisis 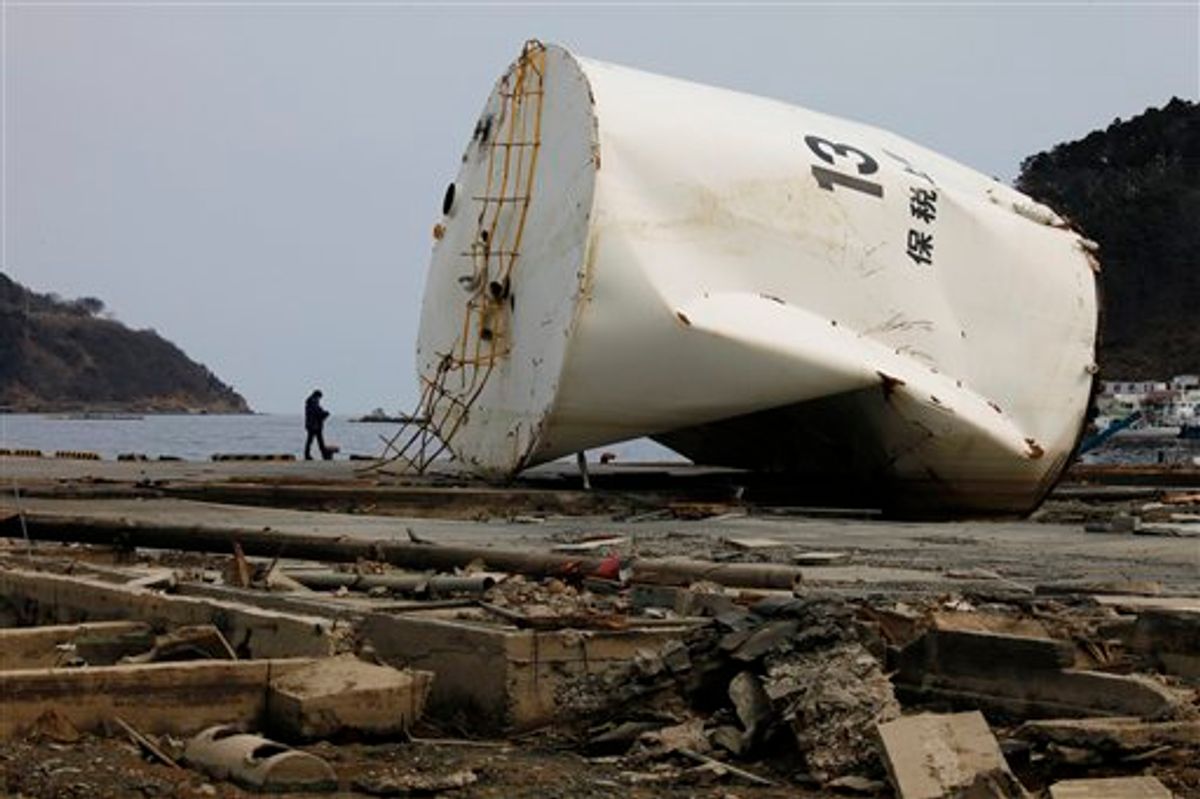 In this photo taken Friday, March 25, 2011, a man walks at the devastated city of Onagawa, Miyagi prefecture, northeastern Japan. As March 11 massive tsunami ravaged this Japanese fishing town, hundreds of residents fled for the safest place they knew: the local nuclear power plant. More than two weeks later, 240 remain, watching TV or playing ball games with their children next to three atomic reactors. It's a startling contrast to the troubled nuclear plant 75 miles (120 kilometers) southeast, where radiation leaks have forced an evacuation of nearby towns, terrifying the nation. (AP Photo/Vincent Yu) (AP)
--

Setbacks mounted Wednesday in the crisis over Japan's tsunami-damaged nuclear facility, with nearby seawater testing at its highest radiation levels yet and the president of the plant operator checking into a hospital with hypertension.

Nearly three weeks after a March 11 earthquake and tsunami slammed and engulfed the Fukushima Dai-ichi plant, knocking out cooling systems that keep nuclear fuel rods from overheating, Tokyo Electric Power Co. is still struggling to bring the facility in northeastern Japan under control.

The country's Emperor Akihito and Empress Michiko reached out to some of the thousands displaced by the twin disasters -- which have killed more than 11,000 people -- spending about an hour consoling a group of evacuees at a Tokyo center.

"I couldn't talk with them very well because I was nervous, but I felt that they were really concerned about us," said Kenji Ukito, an evacuee from a region near the plant. "I was very grateful."

At the crippled plant, leaking radiation has seeped into the soil and seawater nearby and made its way into produce, raw milk and even tap water as far as Tokyo, 140 miles (220 kilometers) to the south.

The stress of reining in Japan's worst crisis since World War II has taken its toll on TEPCO President Masataka Shimizu, who went to a hospital late Tuesday.

Shimizu, 66, has not been seen in public since a March 13 news conference in Tokyo, raising speculation that he had suffered a breakdown. For days, officials deflected questions about Shimizu's whereabouts, saying he was "resting" at company headquarters.

Spokesman Naoki Tsunoda said Wednesday that Shimizu had been admitted to a Tokyo hospital after suffering dizziness and high blood pressure.

The leadership vacuum at TEPCO -- whose shares have plunged nearly 80 percent since the crisis began -- comes amid growing criticism over its failure to halt the radiation leaks. Bowing deeply, arms at his side, Chairman Tsunehisa Katsumata announced at a news conference that he would step in and apologized for the delay.

"We must do everything we can to end this situation as soon as possible for the sake of everyone who has been affected," said Yuhei Sato, governor of Fukushima prefecture. "I am extremely disappointed and saddened by the suggestion that this might drag out longer."

Although experts have said since the early days of the crisis that the nuclear complex will need to be scrapped because workers have sprayed it with corrosive seawater to keep fuel rods cool, TEPCO acknowledged publicly for the first time Wednesday that at least four of the plant's six reactors will have to be decommissioned.

"After pouring seawater on them ... I believe we cannot use them anymore," Katsumata said. Japan's government has been saying since March 20 that the entire plant must be scrapped.

On Wednesday, nuclear safety officials said seawater 300 yards (meters) outside the plant contained 3,355 times the legal limit for the amount of radioactive iodine -- the highest rate yet and a sign that more contaminated water was making its way into the ocean.

The amount of iodine-131 found south of the plant does not pose an immediate threat to human health but was a "concern," said Hidehiko Nishiyama, a Nuclear and Industrial Safety Agency official. He said there was no fishing in the area.

Radioactive iodine is short-lived, with a half-life of just eight days, and in any case was expected to dissipate quickly in the ocean. It does not tend to accumulate in shellfish.

"We will nail down the cause, and will do our utmost to prevent it from rising further," he said.

Highly toxic plutonium also has been detected in the soil outside the plant, TEPCO said. Safety officials said the amounts did not pose a risk to humans, but the finding supports suspicions that dangerously radioactive water is leaking from damaged nuclear fuel rods. There have been no reports of plutonium being found in seawater.

The latest findings on radioactive iodine highlighted the urgent need to power up the power plant's cooling system. Workers succeeded last week in reconnecting some parts of the plant to the power grid.

But as they pumped in water to cool the reactors and nuclear fuel, they found pools of radioactive water in the basements of several buildings and in trenches outside.

The contaminated water has been emitting many times the amount of radiation that the government considers safe for workers, making it a priority to pump the water out before electricity can be restored.

Complicating matters, the tanks storing the contaminated water are beginning to fill up. Pumping at one unit has been suspended since Tuesday night while workers scramble to drain a new tank after the first one reached capacity. And the water just kept coming Wednesday, when a new pool was found.

In another effort to reduce the spread of radioactive particles, TEPCO plans to spray resin on the ground around the plant. The company will test the method Thursday in one section of the plant before using it elsewhere, Nishiyama said.

"The idea is to glue them to the ground," he said. But it would be too sticky to use inside buildings or on sensitive equipment.

The government also is considering covering some reactors with cloth tenting, TEPCO said. If successful, that could allow workers to spend longer periods of time in other areas of the plant.

Meanwhile, white smoke was reported coming from a plant about 10 miles (15 kilometers) from the troubled one. The smoke quickly dissipated and no radiation was released; officials were looking into its cause. The Fukushima Daini plant also suffered some damage in the tsunami but has been in cold shutdown since days after the quake.

The spread of radiation has raised concerns about the safety of Japan's seafood, even though experts say the low levels suggest radiation won't accumulate in fish at unsafe levels. Trace amounts of radioactive cesium-137 have been found in anchovies as far afield as Chiba, near Tokyo, but at less than 1 percent of acceptable levels.

Experts say the Pacific is so vast that any radiation will be quickly diluted before it becomes problematic. Citing dilution, the U.S. Food and Drug Administration has played down the risks of seafood contamination.

As officials seek to bring an end to the nuclear crisis, hundreds of thousands in the northeast are trying to put their lives back together. The official death toll stood at 11,257 on Wednesday, with the final toll likely surpassing 18,000.

The government said damage is expected to cost $310 billion, making it the most costly natural disaster on record.

In the town of Rikuzentakata, one 24-year-old said she's been searching every day for a missing friend but will have to return to her job at a nursing home because she has run out of cash.

Life is far from back to normal, she said.

"Our family posted a sign in our house: Stay positive," Eri Ishikawa said. But she said it's a struggle.