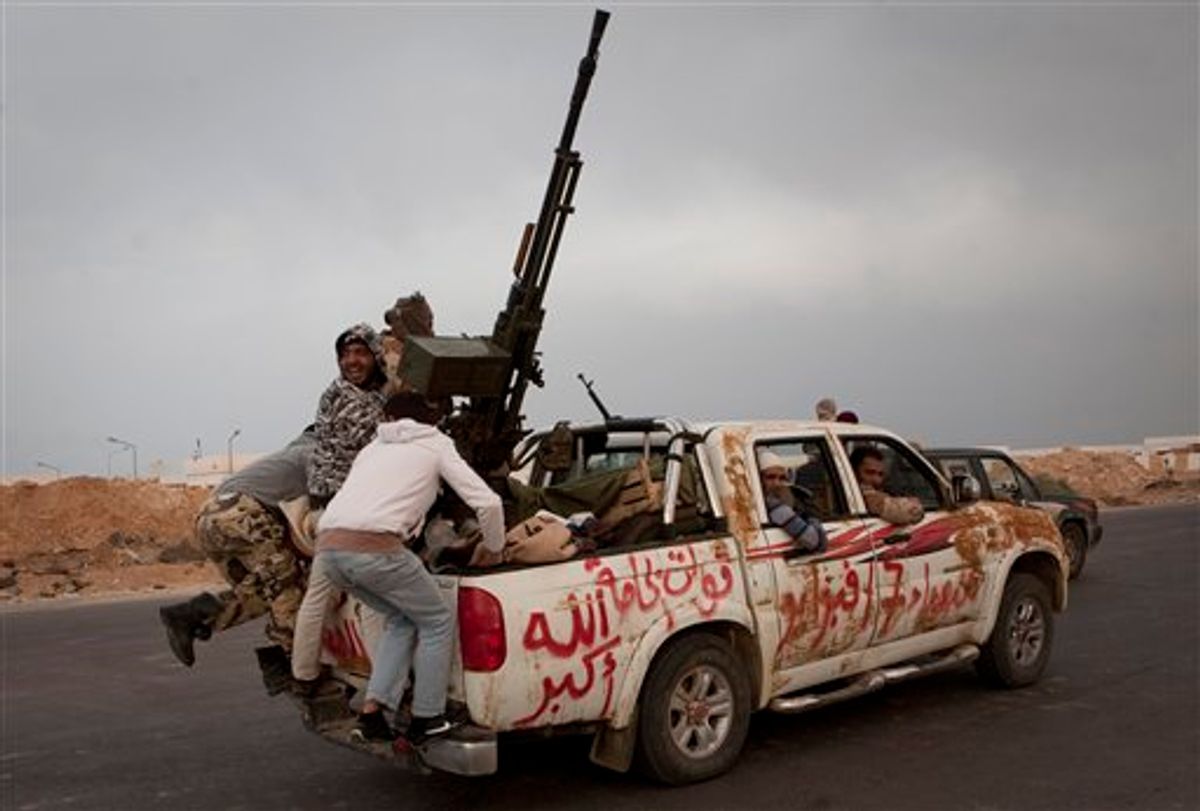 Libyan rebels jump onto the back of their vehicle as they leave Ras Lanouf, 250 km east of Sirte, central Libya, Tuesday, March 29, 2011. Gadhafi's forces drove the rebels out of Bin Jawwad, a hamlet east of Sirte, on Tuesday. Cars and trucks of the retreating rebels filled both lanes of the highway east to the oil port of Ras Lanouf. (AP Photo/Anja Niedringhaus) (AP)
--

Rebels retreated Wednesday from the key Libyan oil port of Ras Lanouf along the coastal road leading to the capital Tripoli after they came under heavy shelling from ground forces loyal to leader Moammar Gadhafi.

NATO planes flew over the zone where the heaviest fighting was under way and an Associated Press reporter at the scene heard explosions, indicating a new wave of airstrikes against Gadhafi's forces.

NATO has intervened in the Libyan conflict with near daily airstrikes to weaken the regime's superior military power vis-a-vis the poorly trained and badly equipped ragtag rebel army.

A rebel near the front lines told the AP that the opposition fighters withdrew from Ras Lanouf rather than fighting the regime forces who were closing in on them.

U.S. Marine Corps Capt. Clint Gebke, a spokesman for the NATO operation aboard the USS Mount Whitney, said he could not confirm any specific strikes but said that western aircraft were engaging pro-Gadhafi forces.

"The joint task force is still supporting the civilians on the ground via sorties," he said in a telephone interview.

With the help of NATO airstrikes earlier in the week, rebel who control the eastern half of Libya rapidly advanced westward on the main coastal highway that leads to Gadhafi's stronghold in the capital. The got within 60 miles of the city of Sirte, Gadhafi's hometown and a bastion of support for the longtime leader with a major military base.

At that point, they came under heavy bombardments by Gadhafi's ground forces, who outgun the rebels in every way -- in numbers, equipment and training.

Over the past two days, the poorly organized rebel forces have been in full retreat back eastward on the coastal highway, with no help from NATO airstrikes that they had pleaded for until around midday Wednesday.