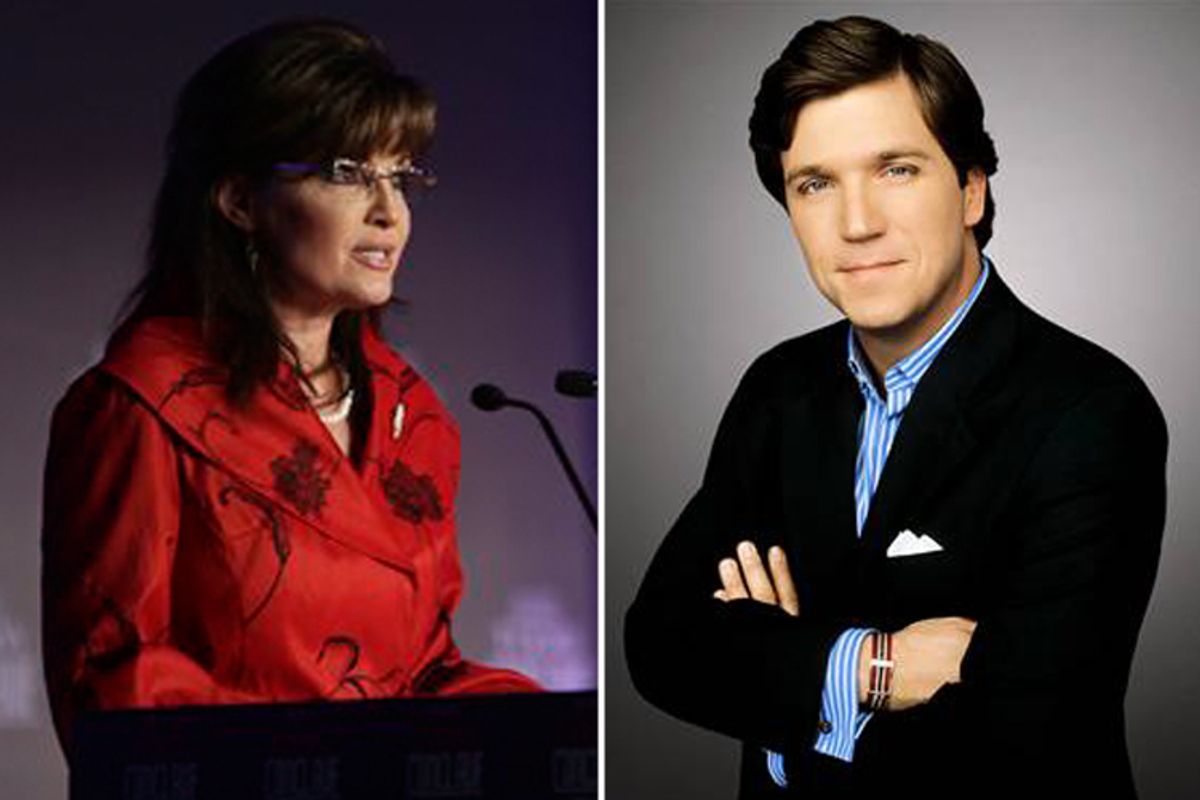 Thank god Sarah Palin ended her lengthy moratorium on complaining about liberal media bias, because someone had to make sure Tucker Carlson's Daily Caller didn't get away with this shoddy reporting job.

The Caller was writing up the story of how Sarah Palin's reality show received a generous tax credit thanks to legislation signed into law by Sarah Palin. (That was strike one!) After explaining where the story came from and quoting some critics (strike two!), the story goes on to quote -- for three full paragraphs -- Palin's responses to the criticism and her defense of the program that subsidizes filming in Alaska. I think, if I'm reading Sarah Palin's ferocious Facebook response to the story correctly, that was strike three.

The Caller's Chris Moody, author of the story, is obviously a sexist Palin-hater. Look at how he ended his article:

In order to obtain answers to the aforementioned questions, Palin’s aide required the Daily Caller to post the former governor’s statements in their entirety.

He then went on to reprint Palin's lengthy statements, unexpurgated, because her office demanded that he do so, despite that being essentially unheard of in professional journalism. He also did it because he wanted to embarrass and smear her.

Palin is outraged that her statement to the Caller was "buried" where no one would ever even notice it. That is, it was quoted at length on Page 1 and then printed in its entirety on Page 2. And what kind of nerdlinger reads two pages of anything? As Palin writes, "I gave them a statement that the writer buried on his story’s second page (which most people won’t even notice -- I didn’t even notice it)...." Sexist liberal media bias! Case closed.

To sum up this lesson in modern press relations, Palin made the Caller jump through a ridiculous hoop to even obtain her self-serving statement, which it used to provide balance to what had been printed elsewhere as a negative, anti-Palin story, and its reward for jumping through that hoop was that she declared war. She is a very classy individual.

Palin's statement to the Caller is more than 600 words long. Her Facebook post expressing rage at her complete statement's relegation to Page 2 after being extensively quoted on Page 1 is nearly 1,000 words long. She really has a lot to say! Or maybe a little bit to say, at length. Or like one or two things to say, over and over again.

I kid. Her complaint does have some merit. If Sarah Palin herself is too stupid to click on the button that sends you to the second page of an article, she can't possibly expect her admirers to figure it out. Next time, Daily Caller, make Palin's 600-word statement the headline of your piece, or else there won't be any more statements from the former governor.

Here is Palin's entire Facebook note, reprinted because it's funny:

Goodness, cleaning up the sloppiness of reporters could be a full time job. In response to The Daily Caller's online inquiry, I gave them a statement that the writer buried on his story’s second page (which most people won’t even notice – I didn’t even notice it) after he spent the first page completely spinning a situation to give the impression that Alaska’s film production tax credit legislation was somehow solely my idea hatched up to benefit the Palins years before I was ever involved in a documentary series on TLC/Discovery Channel. Here’s setting the record straight: As Governor, I signed into law a popular bipartisan bill that was crafted and passed by others and has resulted in numerous Alaska-based productions that are airing today. The only alternative to signing the legislature’s work product would have been for me to veto their legislation, which would have been useless. Besides all that, their legislation worked.

This bill was not some secret big government agenda. These Alaskan legislators just wanted Alaska to be able to compete with the many other states that offer similar incentives. As I noted in my statement (which was curiously buried by The Daily Caller – whose editor-in-chief was recently called on the carpet for publicly using a degrading term to describe women), I can’t speak for the film tax credit programs in other states, but the program in Alaska has been effective. The bipartisan legislation I signed into law in 2008 was borne out of elected lawmakers’ frustration with the fact that shows and films about Alaska were mostly filmed elsewhere. They wanted to incentivize production companies to film in Alaska instead of Canada, Washington state, or Maine. Their bill worked, and as the legislation’s supporters will testify, the state’s economy enjoys the benefits of having this production money circulating right here at home. It was so successful that state lawmakers now want to renew the film production tax credits for another ten years. Keep in mind that we don’t have a state income tax, state sales tax, or state property tax in Alaska. Our state government is predominately funded by oil and gas revenue. Essentially we are using revenue generated from the development of Alaska’s natural resources in order to diversify our economy and create jobs beyond just resource development. Not only does this help promote a new film industry in Alaska, it obviously also has the added benefit of encouraging our tourism industry. These shows and films about Alaska act as perfect tourist advertisements for our state. People come here to experience what they see on the shows filmed here. The dramatic increase in Alaska-based television shows and films are testament to the fact that this legislation worked, and it’s exciting to see our state showcased and appreciated. There has been more film productions here than ever before, and the economic benefit of filming here exceeds the tax credit.

And another point missed by this reporter: apparently The Daily Caller’s conspiracy theory must be that I did all of this not even to benefit myself but Mark Burnett Productions. As I tried to explain to the writer at The Daily Caller, if you believe in this bizarre scenario then why not ask the sponsors, drafters, and supporters of this legislation that would boost job creation if they crafted this bill years ago in order to benefit Sarah Palin. Any suggestion that I somehow did something wrong by signing this legislation is ridiculous. The accusation hinges on the notion that I signed the legislation into law knowing that it would personally benefit me. That’s totally absurd. It wasn’t even my bill, and obviously I had no intention of benefiting from it when I signed it into law in 2008 because I had no idea I would be involved in a documentary series years later. If you’re going to accuse me of benefiting from legislation I signed into law, why stop there? Go ahead and accuse me of “benefiting” from the legislation my administration actually did craft – like for example, our oil and gas evaluation legislation (ACES). You could say I “benefited” from it in the sense that due to ACES the state where I live (Alaska) now enjoys a $12 billion surplus. In fact, you could say that as an Alaskan, I benefited from all of the legislation I championed or signed as governor – just as every Alaskan benefited.

As I also tried to tell the reporter, it’s also a false accusation to suggest that signing this bipartisan bill somehow goes against my position on the proper role of government. I’ve said many times that government can play an appropriate role in incentivizing business, creating infrastructure, and leveling the playing field to foster competition so the market picks winners and losers, instead of bureaucrats burdening businesses and picking winners and losers. Again, I can’t speak for what other states do, but Alaska’s film production tax credit program was an effective way to incentivize a new industry that would diversify our economy. It worked. The lawmakers’ successful legislation fit Alaska’s economy, as our economy is quite unique from other states’ due to our oil and gas revenue. Perhaps it would behoove people to learn much more about the 49th state’s young economy before making broad accusations about the efficacy of business programs. People who live in ivory towers don’t understand the real world where governors and lawmakers actually have to fight to attract business and jobs to their states.

One final thought: having to set the record straight on my Facebook page yet again is further proof that the media can’t be trusted even to print a statement in a manner that people can read.