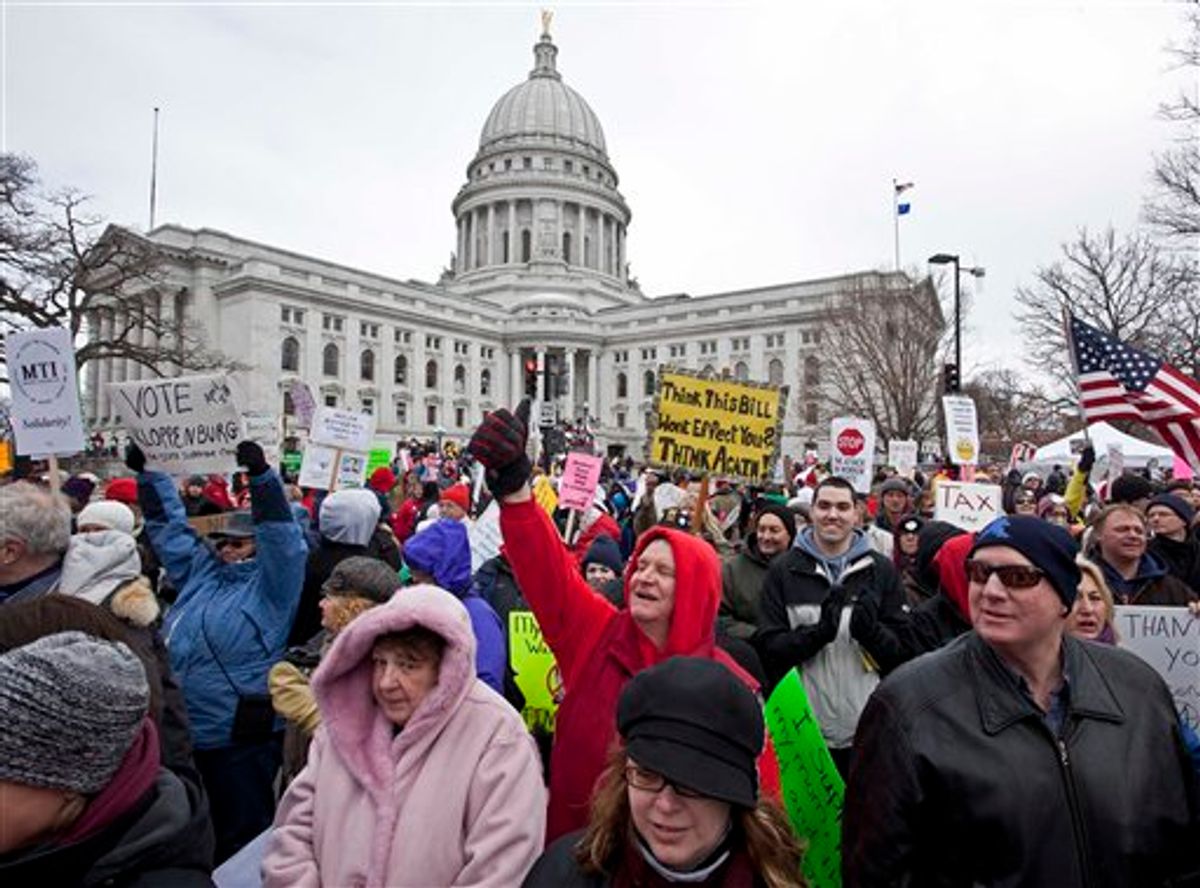 Protesters march outside the state Capitol Saturday, March 12, 2011, in Madison, Wis. While Gov. Scott Walker has already signed a contentious collective bargaining bill into law, demonstrators insist the fight is not over. For some, the focus has shifted from trying to stop passage of the bill to generating momentum for recall efforts against Republicans. Others are simply venting their frustration over the law taking away most of public workers' collective bargaining rights. (AP Photo/Morry Gash) (AP)
--

Wisconsin has a long tradition of what some might consider excessive rhetoric. The legendary Wisconsin governor, senator and Progressive Party presidential candidate Robert "Fighting Bob" La Follette was known to get carried away raving about how "free men of every generation must combat renewed efforts of organized force and greed to destroy liberty." The drawn-out drama spawned by current governor Scott Walker's attempt to deny collective bargaining rights to public sector workers has spurred plenty of highly entertaining storm and fury on both sides.

But it's going to be hard to beat the latest outburst from the Dane County Republican Party, in response to County Judge Maryann Sumi's reaffirmation of a temporary restraining order against enforcing the collective bargaining law.

The backstory to the complicated legal maneuvering can be found here. At issue is the question of whether Republicans broke the state's Open Meetings laws by failing to give enough advance notice of the legislative session at which they forced through the new law. Even though Judge Sumi, without ruling on the legal merits of the case, issued a temporary restraining order, the Walker administration essentially ignored the ruling, published the law, and is acting like it is in effect. This has annoyed the judge, and she is now threatening sanctions. (Ultimately, the entire matter is sure to go to the State Supreme Court, which makes next Tuesday's election for a seat that could swing the court from a conservative to a liberal majority one of the most highly anticipated judicial elections in memory.)

OK, enough with the context. Courtesy of The Maddow Blog, here's an excerpt from the Dane County Republican broadside:

The leadership of the Republican Party of Dane County have all made the choice to stand against the Dane County elite. We accept that Left feels righteous vandalizing our homes and keying our cars. It's only fair. We disagree based upon logic and principle. That is intolerable! We prioritize the Constitution and the well being of the people of Wisconsin over foie gras at cocktail parties. That's the choice we made. We respect Judge Sumi's decision to live her life with the rich diversity that liberals cherish.

She shops at organic gourmet food shops run by leftists! Off with her head! But I'm confused -- surely someone who cares so deeply about her food would eschew foie gras -- made from obscenely fattened ducks -- would she not?

I might be wrong, but I hear a distinct sound of panic in the Dane County Republican eruption. Judge Sumi's TROs are not going to settle this issue one way or the other. Even the Supreme Court won't really have the final word, whichever way next week's elections go. Voters are going to make their decision as to the future direction of Wisconsin politics, first at the recall elections and then in 2012. And if I was an independent voter in Wisconsin, who would I take more seriously, a judge who calls a temporary halt due to perceived legislative irregularities, or a Republican Party gibbering about organic food shops and demanding the e-mails of academics who dare comment critically on current events?