The Brits are furious: Why aren't we? 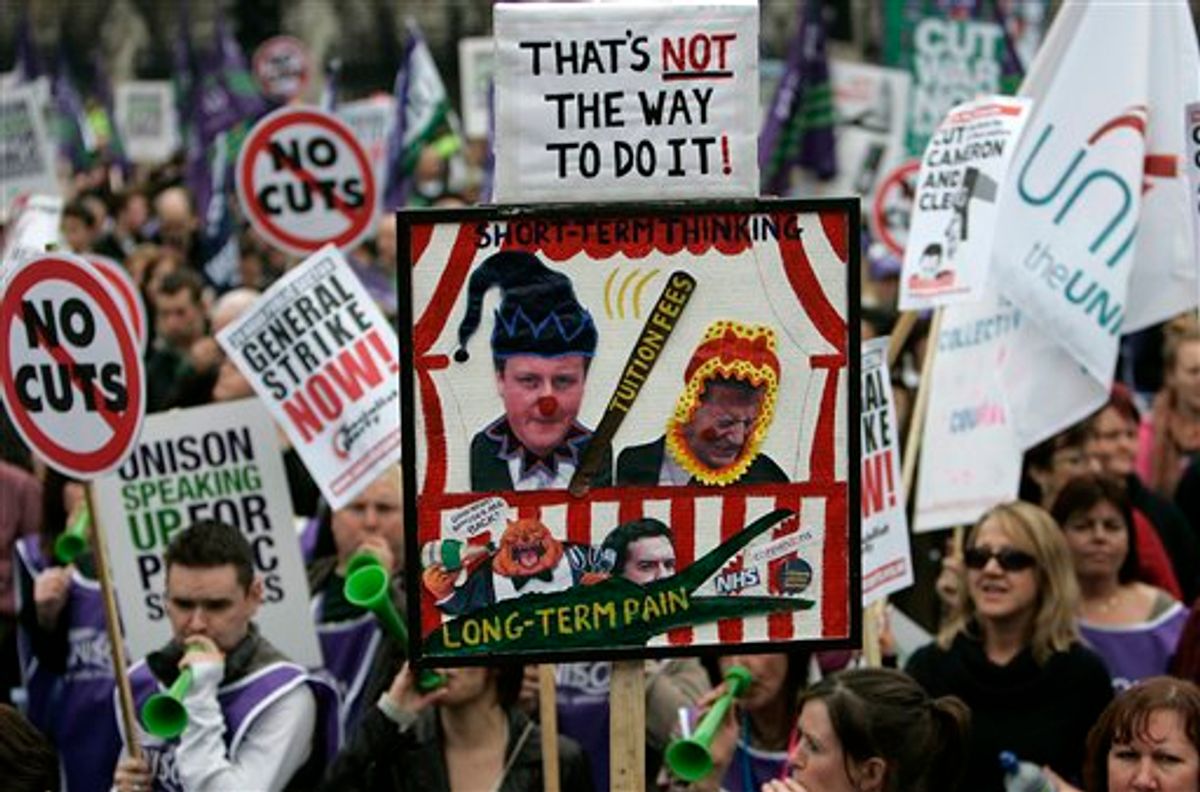 Demonstrators protest against the coalition government spending cuts as they march in London, Saturday, March 26, 2011. Some tens of thousands of mostly peaceful demonstrators streamed into central London on Saturday to march against government budget cuts, with a small breakaway group of demonstrators smashing its way into a bank, breaking windows and spray painting logos on the walls, as police struggle to contain the situation. (AP Photo/Akira Suemori) (AP)
--

Depending on whom you ask, between a quarter- and half-million people marched through the streets of central London last weekend to protest against cuts to public services. Organized by trade unions but attended by people of all backgrounds -- mothers against the closing of childcare centers, students protesting hikes in education fees, pensioners dismayed at the elimination of senior centers and health services -- the demonstration was the largest in the U.K. since a 2003 march against the Iraq War, and one of the largest in British history.

For an American observer, it was an impressive showing that made it hard not to wonder why the only movement with any steam in the U.S. these days is the Tea Party. Why is it that our economic crisis has prompted people to beg for more public sector cuts instead of fewer, for more austerity instead of less? Is a movement against the continued ravaging of state services even possible here?

Of course, there are important political differences between the countries. Because the U.K.'s cuts came as part of a national package of reform, voters had a focus for their ire, as opposed to the U.S., where cuts are scattered across local, state and federal governments. And, of course, it’s easier to organize a nationwide movement in a country that’s geographically smaller than many American states.

Moreover, many British voters felt they'd been the victims of a bait-and-switch in the last election. After declaring themselves no longer the "nasty party" in the run-up to the 2010 election, the Conservatives' rush to cut public services while turning a blind eye to corporate tax evasion rekindled the old stereotype of aristocratic Tories out to maintain their posh lifestyles at the expense of the working and middle classes. Plus, the decision of Liberal Democrat leader Nick Clegg, who is part of the governing coalition, to break his pre-election pledge to oppose tuition increases prompted outrage among many of his young supporters.

Other differences are more ideological. Americans have largely swallowed the low-taxes-lead-to-growth mantra that has yet to become dogma in Britain, and are still too caught up in the myth of the individual to accept the idea that we have a collective responsibility to fund the services we depend on. Brits, on the other hand, are more conscious of class divisions and social mobility, less convinced that they'll become millionaires someday and more wary of the power of actual millionaires.

Perhaps most important, we don't really expect as much from government as the British do. Whereas the tripling of student fees has proven a powerful mobilizing force in the U.K., cuts to public university funding in the U.S. have prompted dismay but have largely been met with resignation. Going into debt to finance one's higher education is more or less expected here. And unlike the U.K., we don’t have a national health system that provides everyone with low-cost care to whittle back. Indeed, in a neat reversal of the Tea Party’s socialist fear-mongering, British activists have held up America as a cautionary tale of unchecked capitalism, warning that reductions in public sector programs like the National Health Service and childcare programs will make the U.K. a more violent, distrusting, unequal society.

No wonder that instead of marching on the Mall, we've just started paying out of our own pockets for what were once public services. It's no secret that the U.S. is more right-wing than the U.K., but Americans really are a Tory dream come true: While Cameron's vision of a "Big Society" in which citizens volunteer to run post offices and staff libraries has been roundly criticized in the U.K., Americans have adopted a Big Society mentality all on our own, volunteering to fill in for teachers and police officers in the face of funding cuts. It'd be nice to see this simply as evidence that the good old American can-do spirit is alive and well, but it’s hard not to feel we've given up much too easily, accepting too quickly that there really is no other option.

That said, there are hints of a nascent anti-austerity movement -- a left-wing response to the Tea Party -- in the U.S. The struggle over public employees' collective bargaining rights in Wisconsin sparked a massive nationwide response. Last week, teachers and parents in New York City protested school budget cuts, and on Saturday, several thousand union members marched in Los Angeles in solidarity with Wisconsin workers. Albany is now bracing for a "Wisconsin-style" protest as New York legislators begin deliberations over the state budget.

There are even branches of UK Uncut, the activist group formed to oppose the British government's austerity measures, now emerging in the U.S. In a day of direct-action protests organized in conjunction with last weekend's London march, US Uncut groups in Washington, D.C., and San Francisco peacefully shut down Bank of America branches to protest the bank's avoidance of federal income tax.

For all the differences between the U.S. and the U.K., the similarities are more acute. We're facing the same kinds of reductions in vital public services and watching the most vulnerable take it on the chin so that corporations and wealthy individuals can pay less in taxes. And while we’re not likely to see hundreds of thousands march on the Mall against austerity measures any time soon, we may well be witnessing the development of a grass-roots network of state- and city-level organizations dedicated to fighting back against the idea that there's only one way to solve a budget deficit.