This is why the GOP might force a shutdown?

Defunding Planned Parenthood, gutting the EPA and more: The bottom-line demands that House Republicans are making 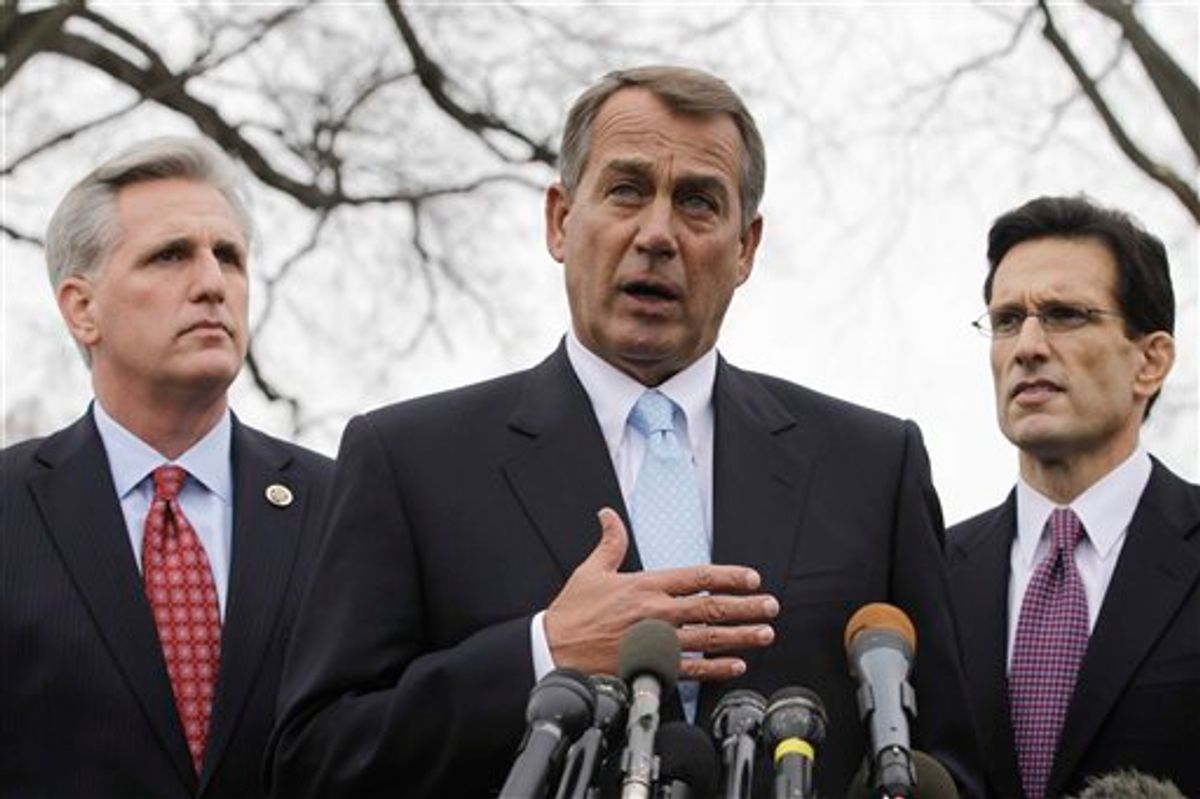 It's high noon on Capitol Hill. After five-and-a-half months of stopgap measures and temporary compromises to keep the government funded, House Republicans now insist that the buck (literally) stops on April 8.  That, according to Majority Leader Eric Cantor is when the GOP will allow the government to shut down partially unless its specific budget demands are met.

What stands in the way of compromise now isn't so much a dollar figure -- Democrats' and Republicans' proposals are reportedly a mere $6 billion apart -- but a set of more than five-dozen amendments that Republicans have attached -- "policy riders."  By definition, a rider is an amendment unrelated to the bill at hand.

The House GOP, which includes dozens of members elected last fall with Tea Party support, is using the budget resolution riders to pursue broad policy goals -- like gutting the healthcare reform law passed last year, or stripping Planned Parenthood of its federal funding. Numerous House Republicans are insisting that the riders must be included in the final federal budget, or else they'll oppose it. This sets up a potential showdown with the Democratic-controlled Senate, which seems open to compromise -- but unwilling to sign off on all of the House GOP's demands.

Since debate in the coming days figures to focus on the merits and legitimacy of these riders, we've identified the major areas that Republicans are targeting with their riders:

The House GOP has approved nine amendments that, in concert, make the implementation of the Affordable Care Act all but impossible. Among these amendments are provisions that would:

Sample argument
Rep. Denny Rehberg (Montana): "Our forefathers would be appalled to see the power over our health and lives that we are surrendering to government. They had firsthand experience with unfettered government control, and they carefully designed a Constitution to limit the government's power. We've learned nothing from them. Never has there been such a complete transfer of power to our government with such blind faith and hope that government will get it right when our experience in every other context is so totally to the contrary."

The highly controversial motion, proposed by Indiana Rep. Mike Pence, would block any and all federal funding to Planned Parenthood and affiliate organizations.

Argument
Rep. Pence: "It's morally wrong to take the taxpayer dollars of millions of pro-life Americans and use it to fund organizations that provide and promote abortion -- like Planned Parenthood of America." The arguments are also well documented across the news media, including here at Salon.

Republicans have approved several amendments aimed at reducing funds for environmental regulation, including a good dozen focused specifically on declawing the Environmental Protection Agency. These amendments would:

Sample arguments
Rep. Mike Pompeo (Kansas): "[The EPA], I'm sure, tell you that they are simply collecting a little bit of data on greenhouse gases, that this registry is just a very innocent effort to learn a little bit more about who is emitting greenhouse gases, who or what. But this data is the very foundation of the EPA's effort to pursue its radical anti-jobs agenda."

Rep. Blaine Luetkemeyer (Missouri): "The IPCC advises governments around the world on climate change, and supporters of cap-and-trade legislation have used the questionable science, the findings of the IPCC, as reasons to support onerous legislation."

Louisiana Rep. Steve Scalise has sponsored an amendment to eliminate federal funding for the salaries and expenses of nine special presidential advisors -- "czars" whose posts weren't subject to Senate confirmation. These positions include: the director of the White House Office of Health Reform ("ObamaCare Czar," according to the GOP); assistant to the president for energy and climate change ("Climate Czar"), special envoy for climate change ("Global Warming Czar"); and special advisor for green jobs ("Green Jobs Czar" -- a position formerly held by Van Jones). Estimated savings are $1.5 million.

Sample argument
Rep. Scalise: "We've seen over the last 2 years under President Obama a very disturbing proliferation of czars, these unappointed, unaccountable people who are literally running a shadow government, heading up these little fiefdoms that nobody can really seem to identify where they are, what they are doing."

Sample argument
Rep. Pompeo: "This will drive jobs overseas. It will increase the cost for manufacturers and consumers."

The House added two amendments to the budget resolution that would curb federal funding for the arts. Those amendments would:

Sample argument
Rep. Quico Canseco (Texas): "What I'm here to do today is to debate and question why this program should be considered a priority and receive taxpayer funding when we're in a fiscal crisis. Make no mistake, we are in a fiscal crisis that threatens not only our economic security but our national security."