President Laurent Ggabo still refuses to abdicate the seat, blaming the rebel attacks on the US and Europe 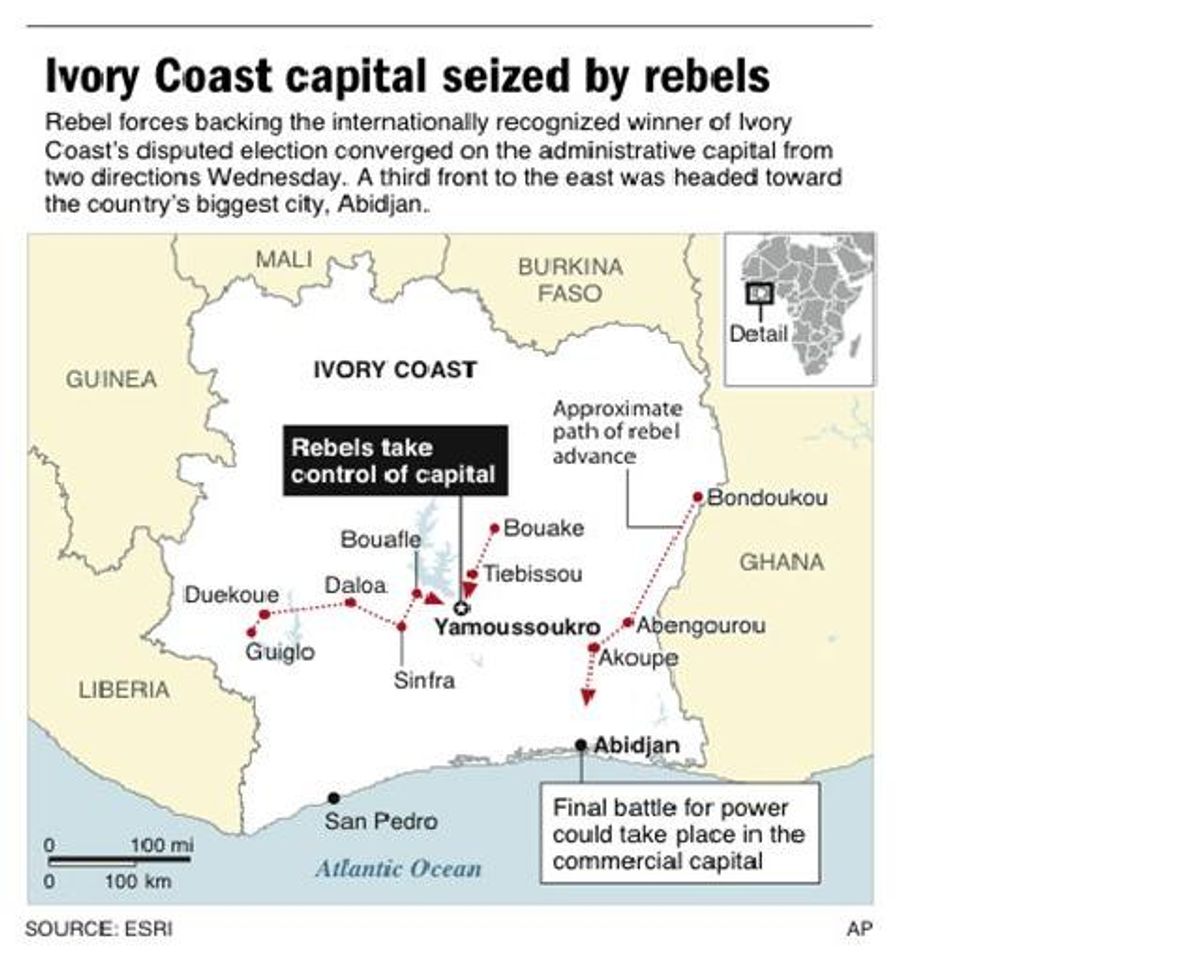 FILE - Allassane Ouattara waves to supporters shortly after his arrival in the Ivory Coast, at the airport in Abidjan, in this Wednesday, Dec. 29, 1999 file photo. Fighters supporting Ivory Coast's internationally recognized President Alassane Ouattara seized control of the country's administrative capital, Yamoussoukro on Wednesday March 30 2011. It was seen as a symbolic victory by Ouattara's forces after months of political chaos that began when Laurent Gbagbo, the incumbent president, refused to recognize the results of the November election. (AP Photo/Clement Ntaye)
--

However, an adviser to longtime president Laurent Gbagbo said he would not step down even in the face of a rebel onslaught on the country's commercial capital.

United Nations radio announced that the port of San Pedro, 190 miles (300 kilometers) west of Abidjan, was taken by rebels late Wednesday. Residents said by telephone that soldiers retreated in trucks while firing into the air as the rebels moved in.

"The rebels slept in Gbagbo's bed," said the aide, who asked not to be named because he is not authorized to speak to the press.

In Abidjan, rebels already in control of several northern districts of the city attacked a prison and freed the inmates, a rebel commander said.

The rebels who support Ouattara also advanced into Yopougon, a district of Abidjan that fervently supports Gbagbo, witnesses said.

The rebel army is on the periphery of Abidjan, said the close aide to Ouattara, who was recognized by governments around the world as the country's legitimate president after winning last November's presidential election.

"They will enter the city on multiple fronts, from multiple directions," said the adviser.

Advancing on foot while firing into the air, the rebels set up roadblocks on one of Yopougon's main thoroughfares and have been battling with police since early Thursday morning, said a local resident who asked not to be named for fear of reprisals.

Across town in the predominantly pro-Ouattara Adjame district, several residents reported that pro-Gbagbo militiamen were firing weapons, though it was unclear at what.

The rebels have seized over a dozen towns since beginning their offensive on Monday, and the fall of the cocoa-exporting port of San Pedro came hours after they took the capital, Yamoussoukro. There, they did a victory lap in vehicles as people cheered and clapped.

They have faced almost no resistance but many fear that army troops still loyal to Gbagbo plan to make a final stand in Abidjan, the country's economic hub and where the presidential palace is located.

Ouattara's whereabouts were not immediately known. He had been holed up for months in the lagoonside Golf Hotel in Abidjan, protected by United Nations peacekeeping troops. Ouattara, who is from the country's north, had long tried to distance himself from the rebels based there who fought in a brief civil war almost a decade ago that left the country split in two.

Clayson Monyela, a South African foreign ministry official, said Mangou and his family were allowed to stay at the ambassador's home in Abidjan "on humanitarian grounds," but that no immediate decision has been made on whether to grant him asylum. He said South Africa's foreign ministry is consulting with unnamed parties in Ivory Coast, West African regional leaders, the African Union and the U.N. on Mangou's move.

South African President Jacob Zuma has been a key mediator as the African Union sought to find a peaceful way to install Ouattara as president. South Africa has had to repeatedly deny it is siding with Gbagbo after initially calling the elections flawed, which some saw as refusing to acknowledge Ouattara's victory.

On Wednesday, the U.N. Security Council unanimously demanded an immediate end to the escalating violence and imposed sanctions on Gbagbo, who has refused to relinquish the presidency, and his inner circle.

Up to 1 million people have fled the fighting, and at least 462 people have been killed since the election.

Gbagbo and Ouattara two men have vied for the presidency for months, with Ouattara using his considerable international clout to try to financially and diplomatically suffocate Gbagbo. After the final round of diplomatic efforts had failed to remove Gbagbo, the rebels launched a dramatic offensive this week, seizing control of the country from the west, the center and the east.

Seydou Ouattara, a spokesman for the rebels who is not related to the political leader, said that they faced so little resistance from Gbagbo's forces because Gbagbo had tried to neuter the army. Diplomats and human rights groups have said that Gbagbo enlisted Liberian mercenaries and has armed militias because he did not trust the regular army.

"He recruited mercenaries. He recruited militias. He essentially told the army we have no confidence in you. We were able to use this to our advantage," said Seydou Ouattara. "In each town, we told the soldiers, we are your brothers. We want the same thing."

Associated Press writers Sophie Tetrel in Paris, and Donna Bryson and Michelle Faul in Johannesburg contributed to this report.