Libya has the potential to radically improve America's image in the Muslim world. It could also be Obama's undoing 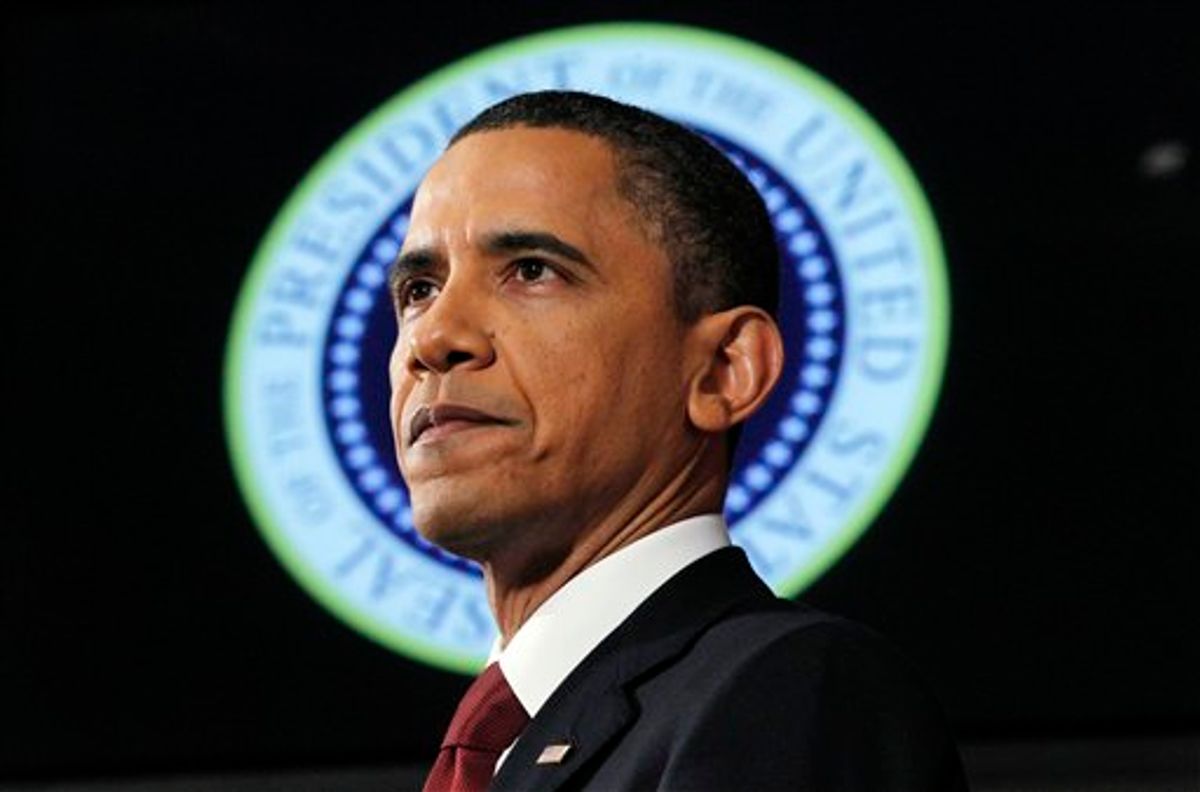 Three things President Obama didn't do in his speech to the nation on Libya: He didn't predict the future, he didn't put Col. Moammar Gadhafi on a "Wanted: Dead or Alive" poster, and he didn't pronounce an "Obama Doctrine" for redeeming a fallen world through bombing.

To anybody who's been paying attention over the past 10 years, these were wise and necessary omissions. "To be blunt, we went down that road in Iraq," Obama said. "Regime change there took eight years, thousands of American and Iraqi lives, and nearly $1 trillion. That is not something we can afford to repeat in Libya."

No, it's certainly not. To be even blunter, Libya itself is not worth it -- the reason U.S. presidents back to Nixon have tolerated the murdering SOB. Leftists condemning NATO's "colonialist" attempt to seize Libyan oilfields might ask themselves why, if that's the motive, it took so long. The country's oilfields were nationalized decades ago. No imaginable Libyan government would surrender ownership to British and Italian corporations currently operating them at great profit.

We had our fill of predictions in Iraq. Never mind the nonexistent weapons of mass destruction. Remember being told that grateful Iraqis would strew flowers in our path? Remember Bush administration officials insisting that the war would pay for itself? Remember, for that matter, that murdering SOB Saddam Hussein dragged from his hole like a rabid animal, as guerrilla war against U.S. invaders went on unabated?

Critics demanding firm predictions and exact timetables are only trying to set Obama up for political failure. Seeing Sen. John McCain on CNN announcing that "Gadhafi must have been somewhat comforted" by the president's failure to guarantee regime change was another reminder of how lucky we are that he never became president.

"If we end up in a situation where Gadhafi is able to cling to power," McCain said, "then we could easily see a reenactment of the first Gulf War: stalemate, a no-fly zone that lasted for 10 years that didn't bring Saddam Hussein out of power." Quite as if the first President Bush's refusal to tear apart the international coalition that ejected Iraq's army from Kuwait by marching on Baghdad hadn't been vindicated by his son's grandiose folly.

Does McCain really want the U.S. engaged in a third ground war in an Islamic country? Absent sending in the Marines, Obama can't guarantee Gadhafi's demise, regardless of badly we'd all love to see it. Bellicose chatter has simply become a reflex with McCain. If somebody told him global warming could be halted by bombing Antarctica, he'd start believing in it.

Ditto for Sarah Palin and other TV talking heads determined to personalize the conflict as a Shootout at Tripoli Corral. "If we're not going to oust [Gadhafi] by killing or capturing him, there is no acceptable end state," Palin allowed.

This was basically the line peddled by pundits who compete for TV ratings by turning news into melodrama. Anything more nuanced, it's feared, will confuse viewers accustomed to seeing world events in terms of action/adventure films.

Seeking a grand theme on CNN, Wolf Blitzer wanted to know if the "Obama Doctrine" of intervening to prevent massacres of civilians would lead the U.S., Britain and France to invade Iran if political violence erupted there.

Certainly not, and for the same reasons NATO stood by when Soviet tanks rolled into Prague in 1968.

Libya is what we scholars of international relations call a very small country. Virtually all of its population lives within a few miles of the Mediterranean Sea, essentially a European lake. Easy in, easy out.

Anybody who's been watching BBC-America knows exactly why France and Italy take a strong interest in Libya. Chaos in North Africa has sent boatloads of desperate refugees washing ashore there. To Europeans, preventing a genocidal slaughter is also a matter of their direct national interest, if not of ours.

Iran, conversely, has 10 times Libya's population; it's geographically remote, with forbidding terrain. Strategically, it's both less immediate and an order of magnitude more challenging than Libya. CNN needs to get real.

That said, a successful U.N.-endorsed intervention in Libya could have huge ramifications as epochal political turmoil sweeps the Middle East.

Up to now, writes the brilliant New York Times columnist Roger Cohen, Arab "despots relied on the limitlessness of their terror. It had to be as absolute as their contempt for the law."

For the United States, historic sponsor and enabler of that terror, to play a humanitarian role in ending it has the potential to change how Arabs see us -- confounding extremists in their midst.

But yes, there's a risk of political, if not military, failure. And there's certainly a risk the American people won't accept a prolonged conflict for such limited goals. Obama could be gambling his presidency on the outcome. He's evidently come to believe that preventing the slaughter is worth it.