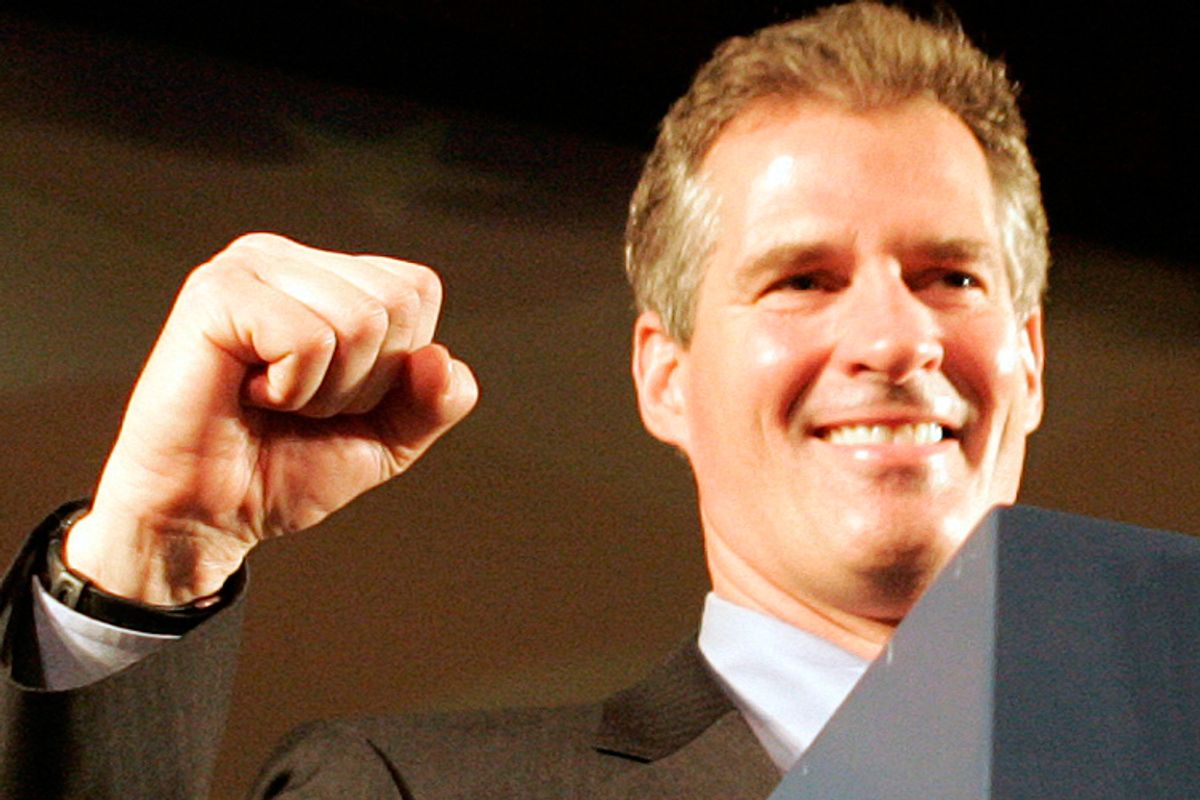 Massachusetts is a deeply Democratic state, one in which barely more than 15 percent of the seats in the state Legislature are held by Republicans and fewer than 15 percent of all registered voters belong to the GOP. So it's hardly surprising that national Democrats have been making noise about defeating the state's Republican senator, Scott Brown, when he stands for reelection next year.

"It's a priority for us," Guy Cecil, the executive director of the Democratic Senatorial Campaign Committee, told the Boston Globe when he made a two-day trip to the Bay State earlier this month.

But the DSCC received some bad news this week when a poll it commissioned found that Brown's popularity is soaring. The survey, which has been seen by at least one D.C. insider and was detailed for Salon, measured Brown's approval rating at 73 percent -- easily surpassing the scores for Barack Obama and the state's two top Democrats,  Gov. Deval Patrick and Sen. John Kerry. It also found him running over the magic 50 percent mark against every potential Democratic challenger, and crushing the strongest perceived Democrats (Reps. Michael Capuano and Ed Markey and former Rep. Marty Meehan) by double-digit margins. The results only grew closer when respondents were primed with negative information about Brown.

The findings underscore the success that Brown has had in separating himself from the national Republican Party brand, which remains poisonous in Massachusetts. (Even in the strongly anti-Democratic tide of 2010 -- the best climate for Republicans in Massachusetts since 1994 -- the GOP failed to win any of the state's six constitutional offices or 10 House seats and actually lost ground in the Legislature.) Brown has largely been a steady GOP vote in the Senate, but he has broken with his party in several high-profile instances: a jobs bill last February, Wall Street reform over the summer, and ratification of the new START treaty and repeal of "don't ask, don't tell" in December. He also made news last week for (sort of) opposing the GOP's effort to defund Planned Parenthood.

All of this has helped Brown craft an image as an independent senator. That some leaders of the Tea Party -- which poured itself into Brown's victorious January 2010 special election effort -- are now openly criticizing him and calling for a GOP primary challenge next year only reinforces this image. Brown's personal appeal -- the whole working stiff with a truck thing -- remains a clear asset too.

This is why in a recent Op-Ed for the Boston Globe I likened Brown to William Weld -- the Republican who won Massachusetts' governorship in something of a fluke in 1990, only to build enormous popularity by picking some high-profile fights with his own national party. When he sought reelection in 1994, every big-name Democrat in the state who'd been talked up as a prospect -- Paul Tsongas, Joe Kennedy, Ray Flynn, John Silber and on and on -- passed. Weld ended up posting a record-shattering 42-point landslide over a hapless state representative.

The endurance of Brown's popularity is likely to give pause to his strongest potential Democratic foes. Capuano and Markey (and South Boston's Stephen Lynch, for that matter) would have to give up safe House seats to challenge him next year. Meehan would have to surrender his cozy perch in academia. Running against Brown might not be worth the risk for them -- especially with at least one (the 2014 governor's race, which should be an open seat) and possibly two (John Kerry's Senate seat, which could open up for a 2013 special election if he is elevated to secretary of state for a second Obama term) other opportunities on the horizon. True, 2012 will be a presidential election year, which will theoretically boost Brown's challenger in blue state Massachusetts. But it's easy to overstate the coattail effect, as Susan Collins demonstrated in 2008, when she easily beat a strong Democratic challenger even as Barack Obama comfortably won Maine. In other words, unless Brown's numbers dip markedly, it's likely that Democrats will be stuck with a second-tier (at best) challenger in '12.

The national implications are potentially significant. Democrats are clinging to a 53-47 edge in the Senate now, but they are defending nearly three-quarters of the seats that will be up next year -- some of them in very red states. Already, North Dakota -- where Democrat Kent Conrad is retiring -- is regarded as a near-certain GOP pickup, and the Democrats' hold on seats in Nebraska, Montana, Missouri, Virginia and West Virginia is shaky at best.

Meanwhile, Massachusetts might be the only logical pickup target for Democrats -- especially now that embattled Republican Sen. John Ensign has finally ruled out a reelection campaign in Nevada. Maybe Indiana could emerge as a target, if Richard Lugar is derailed by Tea Party activists in next year's GOP primary -- and if his GOP foe, state Treasurer Richard Mourdock, proves to be a particularly polarizing nominee. Theoretically, Maine could too, with Republican Olympia Snowe sure to face at least one Tea Party-backed  challenger next year (although Snowe would likely be unbeatable if she decides to run as an independent).

Thus, ousting Brown would significantly increase Democrats' chances of holding the Senate. But failing to do so could be the final nail in their majority's coffin.