The TV personality and "candidate" proudly associates himself with the nuts. But he's not even doing that right 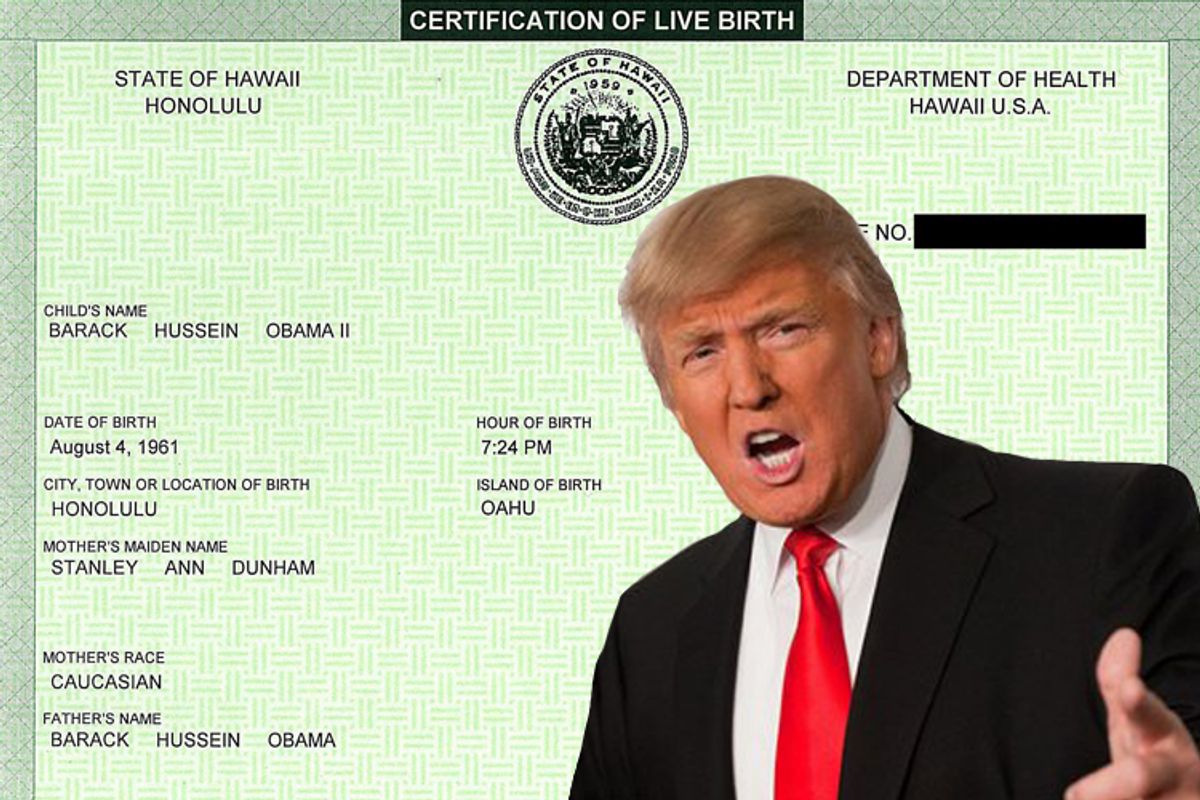 Running for president was going pretty well for Donald Trump, as far as attention-getting schemes go. There was more demand for inane "political" content across the entire mediasphere than the last time he played this particular card, and so there were more opportunities for pretend candidates to appear in headlines and on high-rated television shows. But then Donald Trump said something stupid about the president's birth certificate, and the attention seemed to suddenly increase tenfold! And so he has continued saying things about the president's birth certificate -- increasingly inflammatory and ridiculous things -- and so far, there seems to be no point at which anyone will say, "Enough, Donald Trump, you are no longer invited on my cable news or morning show." (There is, obviously, no point at which NBC will say, "Enough, Donald Trump, you are no longer fit to helm a popular television franchise for our network," either.)

And this is (at press time) is the latest thing Donald Trump has said:

"I don't feel heat; I think he's got heat," Trump said of President Barack Obama on the Laura Ingraham show. "Look, he cannot give a birth certificate. You can, I can, I got one yesterday, it took me a day, 24 hours, I got one.

"A lot of the so called birthers, these are great people, these are really great American people,” he added. “These are hard working, unbelievable, salt of the earth people."

Oh, I'm sorry, while I was copying and pasting that Trump was reported to have said another stupid thing, on "The O'Reilly Factor":

Later he tries a new angle on whether Obama was born in the United States: "I grew up with Wall Street geniuses. What they do in terms of fraud, and how they change documents -- and I'll tell you something, if you notice, those dates were three days later. And here's what I ask people -- who puts announcements? Two poor people, a man and a woman with no money, they have a baby. There's announcements in the newspaper? Nelson Rockefeller doesn't put announcements in. I've never seen one."

Clearly, Trump is not even trying to make sense. But he is providing free publicity for birtherism in general, which ought to help the sales of conspiracy-mongering fraud Jerome Corsi's upcoming book, "Where's the Birth Certificate?" (The book is one page long and the only words in it are "on file at the Hawaii State Department of Health.") (Sorry, that is not actually true, it is just something that would be very funny.)

We all sort of hope that birtherism will or is even already beginning to just go away forever. Despite the fact that birtherism is unkillable, it is undeniable that the movement's primary proponents -- from Orly Taitz to Philip Berg -- have all been repeatedly humiliated and embarrassed in court and in the court of public opinion. While we now live in a nation where prominent Republicans refuse to definitively say they believe the president to be a citizen, it's still not a "normal" thing for "non-crazy" people to actively pursue this stuff. Trump is doing what he can to change that, like brave Charlie Sheen blowing your mind about 7 World Trade Center before him.

It's just too bad Donald Trump is about as good at being a birther as he is at operating casinos.

As David Weigel wrote Wednesday morning, the original birthers -- "birther classics" -- have largely moved on to arguing increasingly unlikely conspiracies or arcane points of constitutional law, due to the fact that the movement began to stall once it became impossible to argue with the simple fact that Barack Obama had amply proven his citizenship. He has a real, legal birth certificate, endorsed by his state of birth. It's not a forgery. It has been photographed and handled by outside observers. He could get a passport with it.

So the original birthers argue that Obama can't be a citizen because he lost his citizenship when he lived in Indonesia or because his father was a British citizen or because Hawaii gives out birth certificates to babies born overseas or because he was born in a parallel Earth where the Nazis won the war or whatever. There is, at least, some thought put into it.

But Trump's birtherism is the birtherism of the dumb, lazy jerk-off. He doesn't bother to do any research to back up his outlandish claims. He doesn't even bother to examine the oft-hilarious research of the birthers who have come before him. It's insulting to the cause, honestly. True Birtherism, at this point, is like a dying art, practiced only by a few true masters. And now this clown comes waltzing in shouting about how there are no photographs of Obama in kindergarten. It's unseemly.