They really had us going for a minute there 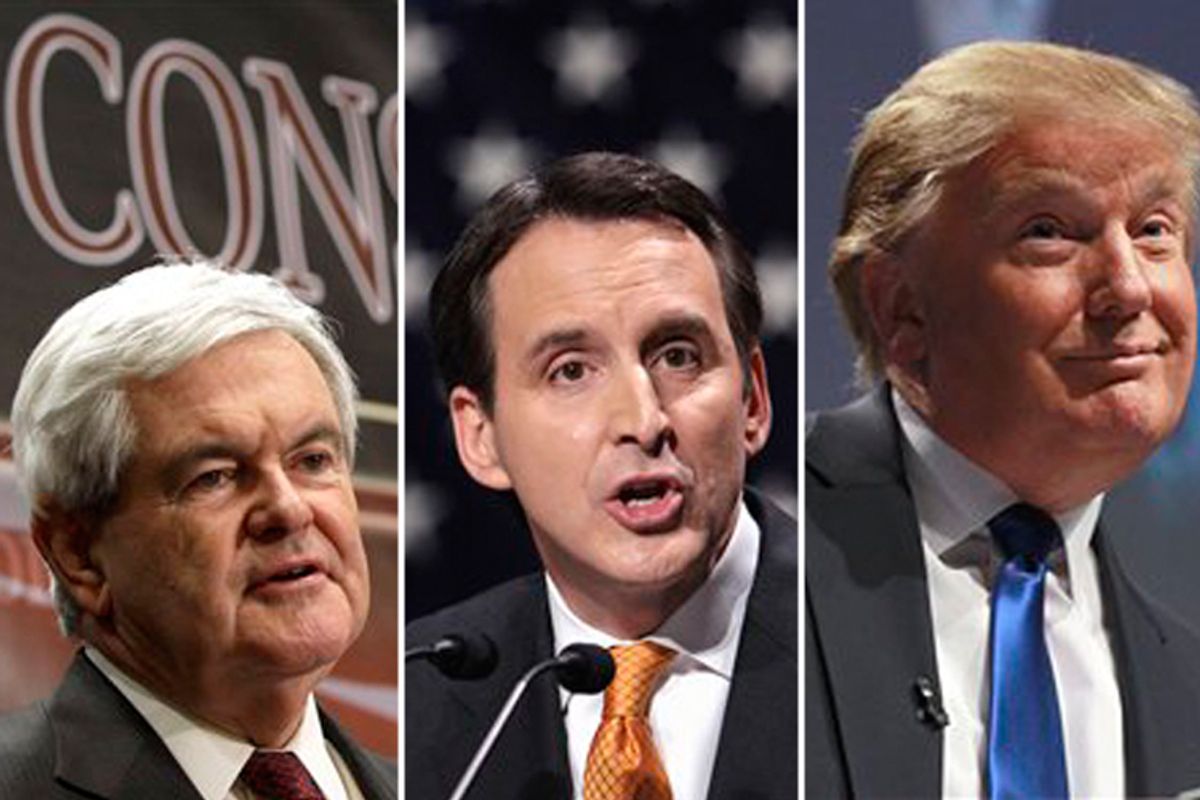 Every purported Republican candidate for president revealed today that they were just kidding about all the stuff, according to interviews with each contender. Suspicions that the entire thing was just a bit of fun first surfaced early Friday morning, when Newt Gingrich began "breaking" -- or failing to hold back laughter -- while explaining his comments on atheism and radical Islam to a reporter.

"No, see, the atheists and the Islamists will work together to stone gay married couples, and -- I'm sorry, I can't even ... OK, you got me. I didn't even know where I was going with this one," Gingrich said. "It was pretty funny, though, right?"

Gingrich and his wife, Callista, confirmed that they were just stringing the entire national political press along for fun.

Both were surprised at how long it was taking before "someone said something," according to the former House speaker. "I mean, I thought I'd gone way too far when I did the bit about how I cheated on my last wife because I love America so much, but you guys didn't even blink."

Subsequent interviews with every man and woman reported to be contemplating a 2012 run revealed that while they all have their differences with the president and the Democratic Party, all are aware that Barack Obama was born in the United States and, in the words of former U.N. Ambassador John Bolton, "his heart's totally in the right place."

"Of course the president isn't a Marxist bent on destroying capitalism. That makes absolutely no sense," said Michele Bachmann, R-Minn. "And for the record, I find Gore Vidal's historical novels both insightful and wickedly clever." Bachmann added that she's not actually running for president. "God, can you imagine?"

Tim Pawlenty, the former Minnesota governor, also admitted to being in on the gag. "Look, I'm basically a pretty moderate, Midwestern guy. I care about the environment, I think we all have an obligation to care for our brothers and sisters in need. Don't get me wrong, I want to keep taxes low for working people, but I'm no nut. I just thought it'd be funny to act like Mitt Romney's dumber, more shameless doppelgänger for a few months."

Romney himself acknowledged that he was flattered that Democrats in Congress, along with the president, adapted the healthcare reform plan he implemented in Massachusetts for the nation as a whole. "It's a moderate, market-based approach to an issue we'd been putting off for far too long," Romney said. "But come on, wasn't it hysterical to pretend I had suddenly become convinced that my own plan was going to kill everyone's grandmother?"

"Oh, and I know absolutely nothing about foreign policy, so I wouldn't even start to criticize anyone on that front," he said.

Supposed candidate and "real estate mogul" Donald Trump was revealed to be a creation of comedian Don Novello.