The coverup continues: The Kennedys in Hollywood

The "Kennedys" miniseries is the latest proof tinseltown just can't handle the truth. I should know 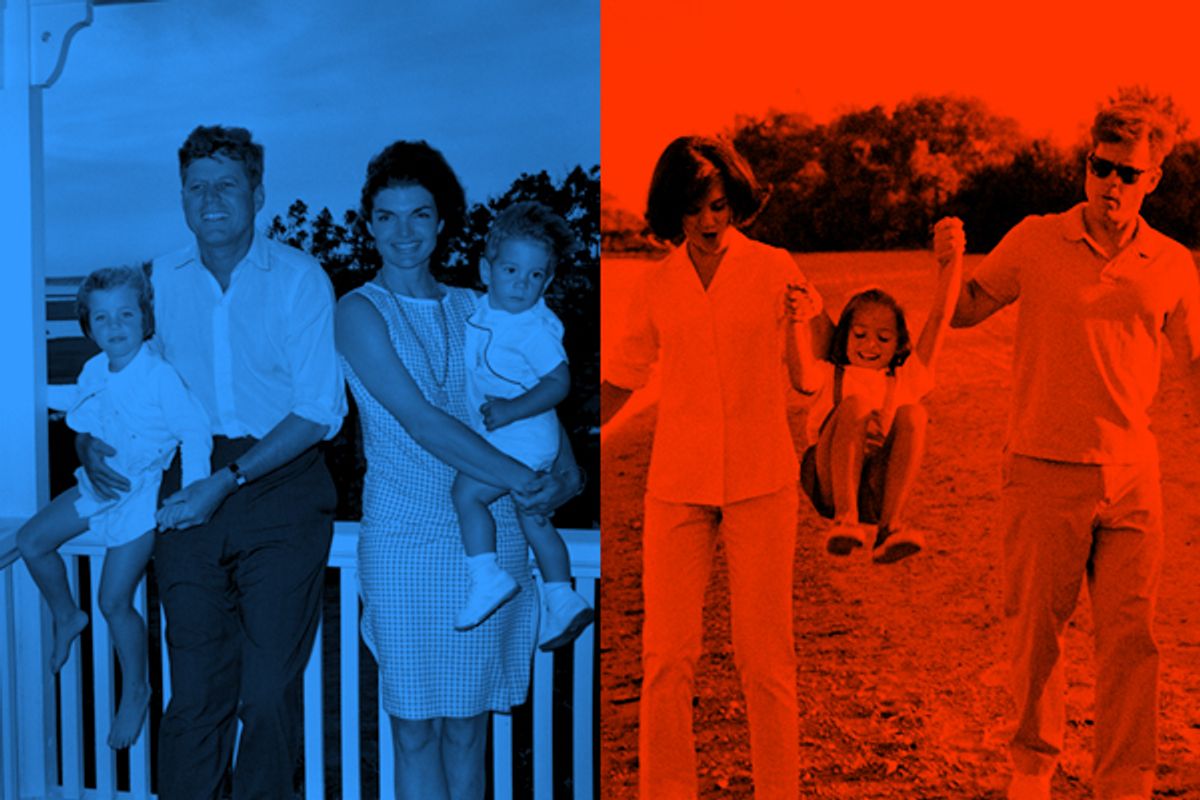 Although it lasted a mere 1,000 days, the Kennedy presidency has been entombed under 1,000 layers of junk history. Now -- with the 50th anniversary of JFK's brief reign upon us, and the half-century mark coming up on his 1963 assassination -- we will soon be neck deep in Kennedy sludge. A flurry of Kennedy projects are in various stages of production in Hollywood, which has long been dazzled by the family's glamour. But none of them promises to go beneath the surface and capture the deeper essence of their tragic story. When it comes to the Kennedys, Hollywood still can't handle the truth.

The first Camelot drama out of the chute is "The Kennedys," the controversial miniseries that was canceled by the History Channel under pressure from Carolyn Kennedy and historians, who argued that the channel should at least make some effort to root the story in, well, history. This was a quaint argument, since the History Channel abandoned history long ago in favor of ice-road truckers, gator wrestlers and other reality sideshows. But the network owners were sufficiently embarrassed by the ruckus to dump the series. "The Kennedys" then took a long, downward trip through television's alimentary canal, ending up in some dark cavity called the Reelz Channel. The six-episode series begins plopping out on Sunday.

"The Kennedys" is a hatchet job pure and simple. The saga is produced by Joel Surnow, which is sort of like Mel Gibson making "The Anne Frank Story." Surnow is the right-wing, Dick Cheney fluff boy who brought us "24," the show that told America not to adjust its dials, that the Constitution was now obsolete. The Camelot noir miniseries, which wallows in mobsters, mistresses and self-medication, is basically the Kennedys as Sopranos, minus the good writing and direction. The early reviews have not been kind, even in the normally charitable Hollywood trade press. "The whole thing," Variety gagged, "plays like a bad telenovela filtered through a 'History for Dummies' text."

All right, I admit, I'm a little bitter. I had a dog in this fight, a rival Hollywood project. I'm the author of a 2007 bestseller about the Kennedy brothers that tells the story of Robert Kennedy's secret quest to solve JFK's murder. My book, "Brothers: The Hidden History of the Kennedy Years," focuses on the brothers' heroic struggle with the national security state to ease America away from the nuclear brink and end the Cold War. I show that Bobby Kennedy became the country's first conspiracy theorist after his brother's assassination, immediately suspecting that the same CIA and Pentagon officials with whom they had bitterly dueled were behind JFK's murder. Bobby realized that he couldn't bring President Kennedy's killers to justice unless he fought his way back to the White House. RFK's presidential campaign in 1968 was not only a fight for the soul of America -- a country poisoned by war and racial strife -- it was a breathtakingly bold, and ultimately fatal, confrontation with his brother's assassins.

This, to me, is the most dramatic story to tell about the Kennedys. They tried to save America, and they were killed by the Saurons who have kept our country in a permanent state of fear and war for the past half-century -- virtually my entire life. It's a grand epic, as old as ancient Rome, as beautiful and horrible as Shakespeare.

The executives at Lionsgate, one of the bigger independent studios in Hollywood, saw it the same way and they optioned my book for a TV miniseries in 2008. They treated "Brothers" as a hot property, the ultimate political thriller. Joining forces with a high-profile producer -- Sid Ganis, then president of the Academy of Motion Picture Arts and Sciences -- and an A-list TV writer, the studio began aggressively pitching "Brothers" to TV networks. Jon Hamm -- the star of Lionsgate's hit series "Mad Men" -- was chatted up as the perfect JFK. No wardrobe changes necessary.

The traveling "Brothers" road show roamed all over the entertainment capital. Because of the industry names attached to the project, we got high-level meetings at HBO, Showtime, ABC and Starz, among other stations of the Hollywood cross. At one point, Todd Haynes was interested in directing, before peeling away to do "Mildred Pierce."

There was buzz, there was excitement, there was love in the room. And then nothing. Chris Albrecht -- the programming wizard who had made HBO not just television ("The Sopranos," "Six Feet Under," etc.) and then resurfaced at Starz -- talked about making "Brothers" the centerpiece of his first season at his new network home. Albrecht was all Roy Cohn, hooded-eye intensity, and fuck-'em-let's-do-this swagger. And then, he had a sudden change of heart. The fearless TV mogul didn't want to compete with the Joel Surnow miniseries, or at least that was the explanation. In Hollywood there are always murky back stories.

Yes, I know -- "It's Chinatown, Jake" -- get over it. There are a million sad stories in Naked Hollywood. But something seemed rigged here, as one network after the next turned down "Brothers" -- something political under the surface. Oliver Stone, whom I met somewhere along the way, told me in a matter-of-fact tone, "'Brothers' will never get made in this town." Stone knew something about the subject. His "JFK," released back in 1991, was the last movie to offer a deep and brave interpretation of the Kennedy tragedy. For his efforts, Stone was so savagely pilloried, he still hasn't fully recovered his reputation or -- it seems to me -- his political self-confidence.

Apparently, Stone knew what he was talking about. Now, three years after Lionsgate bought the rights to "Brothers," my book is an orphan in Hollywood, owned by nobody but me. Meanwhile, a slew of other Kennedy projects have rushed forward. A low point in my Hollywood tragicomedy came when the screenwriter of the widely reviled Surnow miniseries, a man named Stephen Kronish, tried to defend himself against the rising chorus of criticism by citing "Brothers" as one of his sources. This is the very definition of adding insult to injury.

Now, in addition to Surnow's "The Kennedys," Matt Damon is preparing to play Bobby in yet another bland biopic; Leonardo DiCaprio is working on a Kennedy conspiracy movie based on Lamar Waldron's books -- heavy tomes that propose such a convoluted explanation for the JFK assassination that they make "Inception" look linear in comparison; and, worst of all, Tom Hanks' Playtone company is preparing an assassination miniseries for HBO based on celebrity prosecutor Vincent Bugliosi's massive phone book, "Reclaiming History," which took a whopping 1,648 pages to argue that Lee Harvey Oswald did it all by himself, and was still unconvincing.

For the past 50 years, every Kennedy drama except Oliver Stone's has fallen into the same predictable categories. They are either safe -- i.e., weepy valentines to the suffering, stoic family -- or sleazy (see Surnow above). When filmmakers do screw up their courage to dig a little deeper, they invariably end up blaming the Mafia for killing Jack and changing American history. Yes, the mob played a role in Dallas. But the crime lords never participated in anything this epic without their overlords -- the CIA, their longtime partners in crime.

Here's my advice to the viewing public as the Kennedy mudslide begins. Run, and don't look back. There is nothing you need in these movies and TV "events" to understand the true Kennedy story.

This is all you need to know. The Kennedys died for a reason. They died because they told America that our enemies were human, like us, and loved their children too. They died because they vowed to shatter the CIA into a thousand pieces, and because they told the generals who wanted to launch a nuclear war over Cuba that they were mad. While Barack Obama outsources his presidency to Wall Street, the Pentagon and the CIA, John Kennedy tried to tell his fellow citizens that we must no longer dominate the world.

This is what you need to know. The Kennedys died for America's sins.