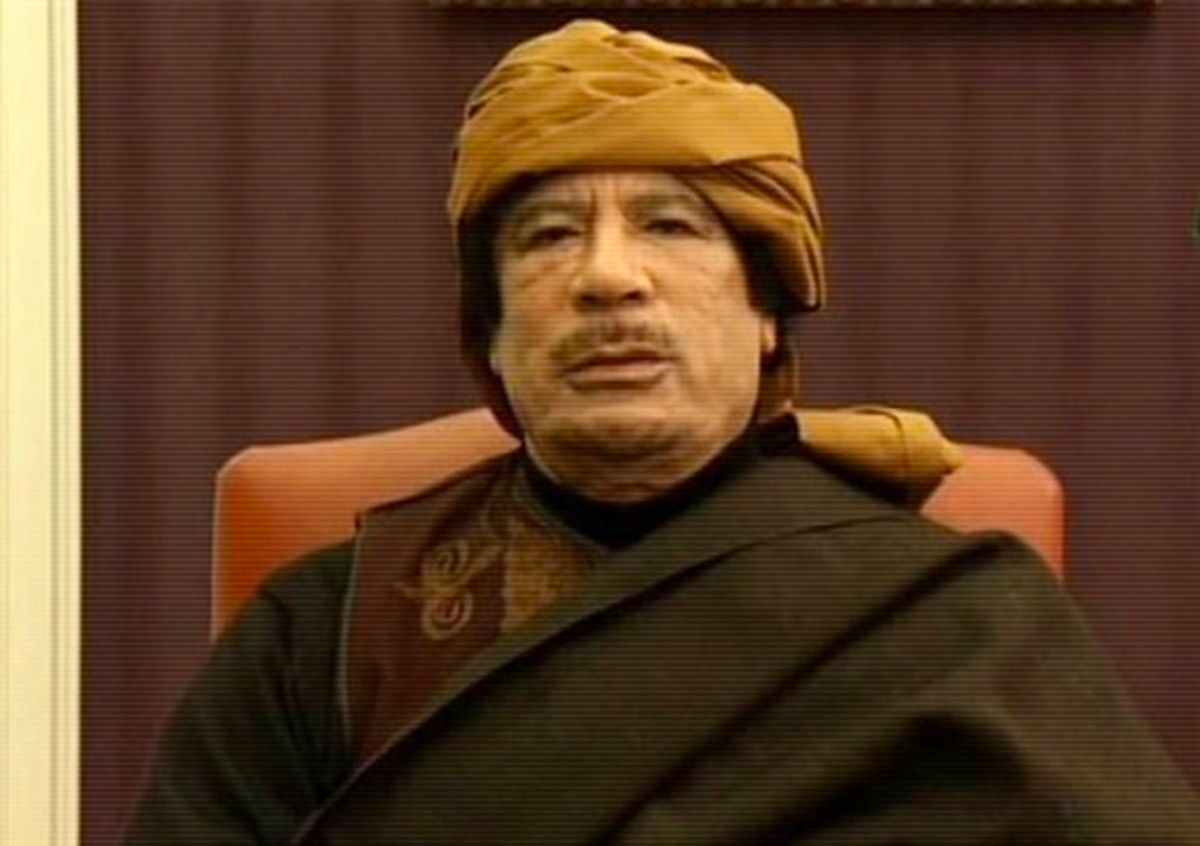 In this video image taken from Turkish television Libyan leader Moammar Gadhafi is seen during an interview with the TV channel TRT, in Tripoli, March 8, 2011.
--

Launched almost exactly a quarter-century after Ronald Reagan first bombed Tripoli, America's new war in Libya was guaranteed to be yet another fist-pumpin', high-fivin' remake of a big-budget 1980s action movie -- the kind of scripted, stylized "Top Gun"-like production that gets audiences to cheer wildly and ask few questions.

Almost three weeks in, Operation Odyssey Dawn has no doubt delivered on that promise -- it has a blockbuster $100-million-per-week budget, a comic-book-grade villain in Col. Moammar Gadhafi and the modern media's obedient transcription of U.S. government pronouncements.

What war proponents did not bank on, however, was this latest exercise in "shock and awe" also unmasking unspoken and uncomfortable realities at the twilight of American empire. Here are just a few:

-- America Suffers from a Bad Case of Selective Deficit Disorder: Dick Cheney once said "deficits don't matter," and that attitude defines our increasingly acute case of Selective Deficit Disorder -- i.e., the disease whereby politicians express concern about deficits only when it justifies cutting non-military expenditures. Just weeks ago, both political parties were calling America "broke" and competing to show who was more concerned about reining in spending. Most of these same deficit hawks, though, seem unconcerned about all that cash being spent on million-dollar cruise missiles in North Africa.

-- America Doesn't Really Care About the Constitution: Despite the Tea Party-inspired talk about "enumerated powers" in the Constitution, the Libya invasion shows that few on either the left or right genuinely care about our country's founding document. We know this because there's been so little outcry about President Obama invading Libya without a constitutionally mandated congressional declaration of war. The silence is particularly deafening considering Obama himself explicitly said in 2007 that such unsanctioned invasions are blatantly unconstitutional.

-- America Has Made Patriotism the Refuge of Partisans: During the Iraq invasion, Republican partisans regularly insinuated that Democratic war opponents were unpatriotic because their criticism allegedly helped Saddam Hussein. We hear the same demagogic argument today with regard to Gadhafi, only now from Obama partisans. Indeed, see for yourself -- log onto Twitter or Facebook or a liberal blog, and dare question the premise of the Libya invasion. Inevitably, some of the same Bush opponents who took umbrage at being called Saddam sympathizers will deride you as an unpatriotic Gadhafi lover. By this inanely hyperpartisan logic, of course, anyone opposing an immediate invasion of North Korea is a huge fan of Kim Jong Il.

-- American Policymakers Aren't Motivated by Humanitarian Concerns: Though many Americans unflinchingly accept the Obama administration's humanitarian rationale for the Libya incursion, the justification is laughable coming from an administration that called Egypt's American-financed dictator Hosni Mubarak "a friend," labels the Saudi royal family an ally and this weekend praised Syria's Bashar al-Assad as "a reformer" even as he now massacres his own people. The Libya War is about a lot of things -- oil, defense contracts, the Pentagon's brand-new Africa Command establishing its first foothold on the resource-rich continent, etc. -- but it is not primarily about saving lives.

Secretary of Defense Robert Gates told ABC News this week that Libya poses no imminent threat to America and that its civil war is "not a vital national interest to the United States." The same cannot be said for the painful truths the conflict underscores. If left unaddressed, they threaten our budget, Constitution and credibility far more than any tyrant or terrorist ever could.