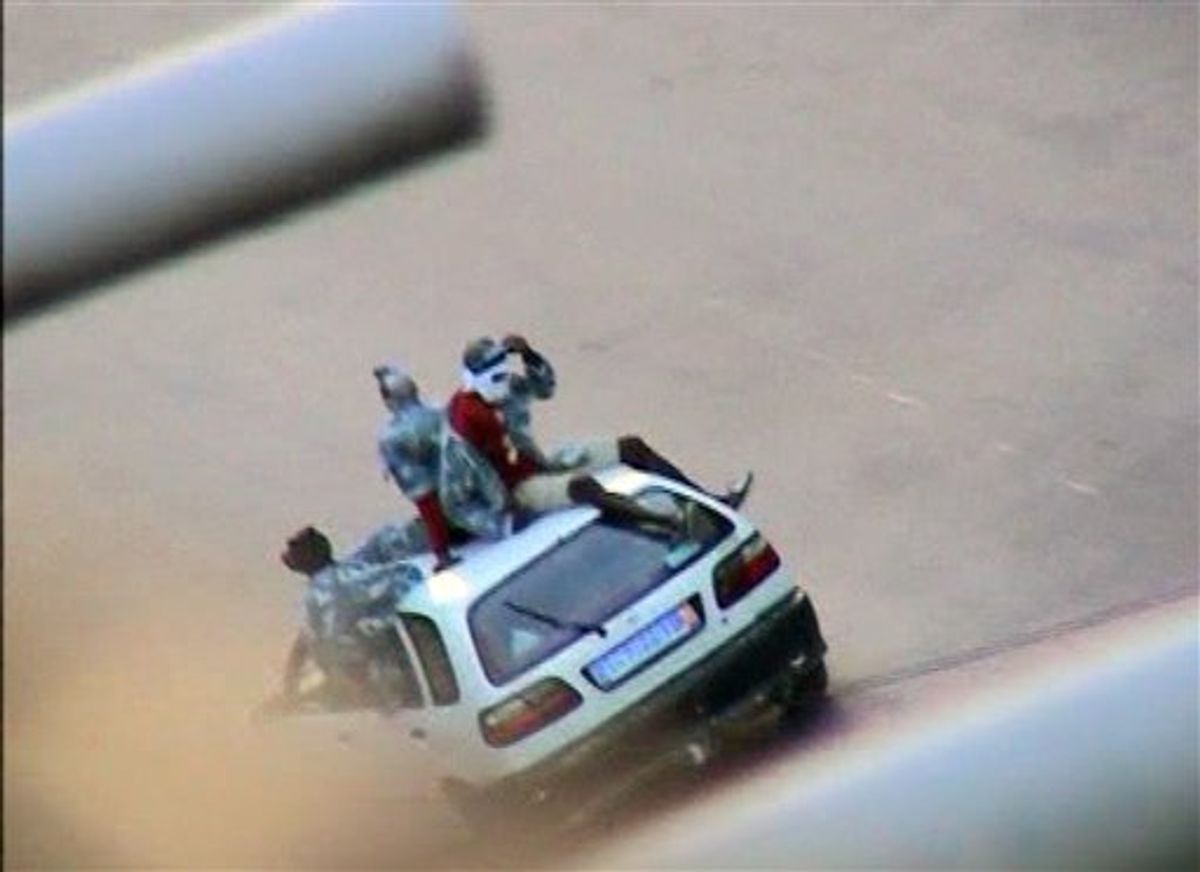 In this frame made from TV, a pro-Incumbent Laurent Gbagbo militia group is seen driving around in Abidjan, Ivory Coast, Thursday March 31 2011. Rebels fighting to install Ivory Coast's democratically elected president, Alassane Ouattara , began besieging the main city of Abidjan on Thursday as the top army commander fled his post in the face of a lightning offensive that saw several towns and a seaport quickly fall. (AP Photo / APTN ) TV OUT (AP)
--

More than 1,000 civilians have been killed in a western Ivory Coast town, a Catholic charity said Saturday, adding that the mass killings happened in an area under the control of forces fighting to install the country's internationally recognized president.

The U.N. military spokesman said he had no information about mass killings in Duekoue, though he confirmed there are nearly 1,000 peacekeepers based there.

Spokesman Patrick Nicholson of the Roman Catholic charity Caritas said workers visited Duekoue on Wednesday and found hundreds of bodies of civilians killed by bullets from small-arms fire and hacked to death with machetes.

He said they estimated that more than 1,000 civilians were killed.

The International Federation of the Red Cross put the death toll at Duekoue at about 800, in separate and independent visits Thursday and Friday.

Nicholson, the Caritas spokesman, said the killings occurred over three days in a neighborhood controlled by fighters loyal to internationally recognized President Alassane Ouattara, though it was not clear who the perpetrators were.

"The massacre took place in the 'Carrefour' quarter of town, controlled by pro-Ouattara forces, during clashes on Sunday 27 March to Tuesday 29 March," Nicholson said. "Caritas does not know who was responsible for the killing, but says a proper investigation must take place to establish the truth."

He said the victims included many refugees from fighting elsewhere in the country, where rival forces had been battling over a disputed November election.

Caritas' investigation would indicate that people were killed at close quarters in a small neighborhood of a town of just 50,000 people as pro-Ouattara fighters began a two-pronged assault that brought them swiftly to Abidjan, the commercial capital and seat of power, within days.

The charges would be a strong blow to the embattled government of Ouattara, who is calling for entrenched incumbent leader Laurent Gbagbo to cede power after losing November's poll.

Ouattara's camp denied forces fighting for it were involved in any atrocities including in western Ivory Coast, but did not refer to the latest allegations. Efforts to reach Ouattara's spokesman Saturday were unsuccessful. He did not respond to calls to his cell phone.

Col. Chaib Rais, the U.N. military spokesman, told The Associated Press that nearly 1,000 peacekeepers at Duekoue "are protecting the Catholic Church with more than 10,000 (refugees) inside, and we have military camps in the area."

But he said "I have no special report of (mass killings). There was fighting two days before, on Sunday, and people were killed, but I cannot confirm those numbers."

Rais said there was fighting in and around the town on Sunday and Monday, between forces loyal to the rival leaders.

On Monday, fighters loyal to Ouattara said they took Duekoue. But Nicholson said interviews with survivors indicated pro-Ouattara forces had control of Carrefour neighborhood from Sunday.

International and Ivorian Red Cross teams visited Duekoue Friday and saw a "huge number of bodies," estimated at more than 800, she said.

"We think there is a risk that this kind of event can happen again and hope that by calling today again for protection for the civilian population, we hope that such events can be avoided in the future," Krimitsas told The Associated Press by phone from Geneva.

The area has been a hotbed for conflict between two tribes that support rival leaders vying for power in Ivory Coast, the democratically elected Ouattara and Gbagbo, who refuses to accept his election defeat.

The International Organization of Migration said Friday that tens of thousands of refugees have overcrowded Duekoue and that others who had fled the violence in Duekoue "are now stranded along the route, in fear for their lives."

It said some of those slaughtered apparently were killed by "mercenaries" from nearby Liberia. Liberian mercenaries have been reported to be fighting for both Gbagbo and Ouattara.

The Roman Catholic bishop for the area, the Right Rev. Gaspard Beby Gneba of Man, said he was called by a priest from Guiglo, a town near Duekoue that also is sheltering refugees. He said the priest told him refugees were dying and that they were burying two people on Saturday.

Gneba said tensions in the area are a mixture of political, ethnic and land rivalry, aggravated by the influx of tens of thousands of new Ivorian refugees and long-established refugees from neighboring Liberia. In January, an unknown number of people were killed in violence in which some homes were torched and others looted, he said.

Gneba said more than 30,000 refugees had flooded the town of about 50,000 since January. Many are being sheltered at the Salesian priests' Mission of St. Theresa of the Baby Jesus.

"There's a traumatic humanitarian situation there," Gneba said. "They need everything: food, medicine, water, sanitation. People have lost everything, houses, clothes, they do not even have a mat to sleep on."

Rais, the U.N. colonel, said there are nearly 400 peacekeepers based at Guiglo who were doing what they could to help with water and food.

Ouattara's government, in a general statement Friday responding to allegations of abuses by Amnesty International, blamed any killings on Gbagbo forces acting as they retreated.

Ouattara had long tried to distance himself from the northern-based fighters taking up his cause who fought in a brief civil war almost a decade ago that left the country split in two. Those fighters were accused of many atrocities at the time.

But Ouattara's repeated calls for an international military intervention to force out Gbagbo and end the violence have gone unheeded. This week he appeared to change tack as the fighters began a swift advance on Abidjan, calling the rebels the "Republican Forces."

"The government firmly rejects these accusations and denies all implication of the Republican Forces of Ivory Coast in any possible violations," said Friday's statement.

Human Rights Watch issued a statement Saturday saying it had documented abuses, with the vast majority perpetrated by forces loyal to Gbagbo against real or perceived Ouattara supporters, as well as against West African immigrants and Muslims.

"The documented abuses include targeted killings, enforced disappearances, politically motivated rapes, and unlawful use of lethal force against unarmed demonstrators," the statement said. "These abuses, committed over a four-month period by security forces under the control of Gbagbo and militias loyal to him, may rise to the level of crimes against humanity."

It was not immediately possible to reach Gbagbo or his ministers.

But the New York-based organization said atrocities committed by pro-Ouattara forces also could amount to war crimes and crimes against humanity, including three detainees burned alive and four whose throats were slit, all in Abidjan.

In one village near Abidjan, the statement said, at least nine civilians were killed "in an apparent case of collective punishment against alleged civilian supporters of Gbagbo."

It added, "The killing of civilians by pro-Ouattara forces, at times with apparent ethnic or political motivation, also risks becoming a crime against humanity should it become widespread or systematic."