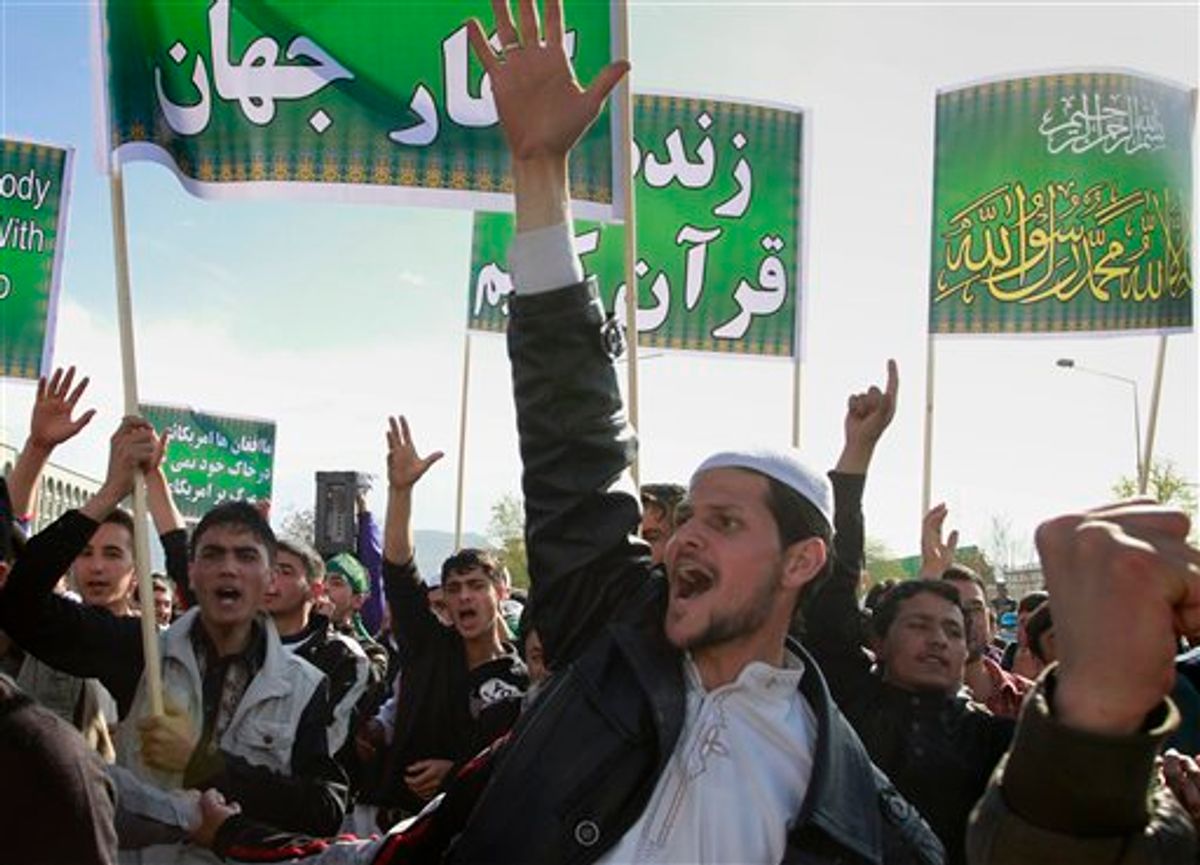 Afghans shout anti- US slogans during a demonstration in Kabul, Afghanistan on Friday, April 1, 2011. Eight foreigners were killed on Friday after demonstrators protesting a reported burning of the Muslim holy book stormed a United Nations (UN) office in northern Afghanistan, opening fire on guards and setting fires inside the compound, a top Afghan police official said. Right banner says 'there is no God but Allah and Mohammad is his messenger' and the center banner says 'long live holy Quran'. (AP Photo/Musadeq Sadeq) (AP)
--

Anger over the burning of the Muslim holy book at a Florida church fueled a second day of deadly violence half a world away in Afghanistan, where demonstrators set cars and shops ablaze Saturday in a riot that killed nine protesters, officials said.

The church's desecration of the Quran nearly two weeks ago has outraged millions of Muslims and others worldwide, fueling anti-American sentiment that is further straining ties between the Afghan government and the West.

The uproar even brought violence to the normally peaceful northern city of Mazar-i-Sharif on Friday, when a crowd of protesters -- apparently infiltrated by insurgents -- stormed a U.N. compound in an outpouring that left four Afghan protesters and seven foreign U.N. employees dead.

The top U.N. envoy in Afghanistan, Staffan de Mistura, said the organization had no plans to evacuate. It would, however, temporarily redeploy 11 staff members from Maraz-i-Sharif to Kabul

"This is not an evacuation, it is a temporary redeployment because the office is not functioning. We will be ready to go back as soon as we can establish an office that is secure enough," he told reporters.

In an unrelated attack that nonetheless demonstrated the kind of violence plaguing Afghanistan nearly a decade after the U.S. invaded to oust the Taliban and hunt al-Qaida, two suicide attackers disguised as women in blue burqas blew themselves up and a third was gunned down at a NATO base on the outskirts of Kabul, police said.

The Quran was burned March 20, but many Afghans only found out about it when Afghan President Hamid Karzai condemned the desecration four days later. The burning took place at the Dove Outreach Center in Gainesville, Florida, the same church where the Rev. Terry Jones had threatened to destroy a copy of the holy book last year but initially backed down.

On Saturday, thousands of Afghans carrying long sticks and holding copies of the Quran over their heads marched through Kandahar, the largest city in southern Afghanistan and the cradle of the insurgency. The crackle of gunfire could be heard throughout the city, which was blanketed by thick black smoke.

Security forces shot in the air to disperse the crowd, said Zalmai Ayubi, a spokesman for the provincial governor. It's unclear how the protesters were slain, he said.

The governor's office in Kandahar province issued a statement saying that nine protesters were killed and 81 others were injured in the demonstration that turned into a riot. Seventeen people, including seven armed men, have been arrested, the statement said.

The governor's office claims demonstrators were incited by extremists who joined the group and set property ablaze.

"The enemies of the people and country also burned down the furniture and a bus at a ladies' high school in Kandahar and destroyed some other properties," the governor's office said.

An Associated Press photographer estimated the crowd at a few thousand and said demonstrators had smashed his camera and roughed up other journalists.

Karzai's office said the president spoke on the telephone Saturday morning with U.N. Secretary-General Ban Ki-moon. Karzai asked the secretary-general to extend his condolences to the families of the U.N. workers slain Friday.

He also called on the U.N. to help promote religious tolerance throughout the world to ease friction between people of different faiths. Karzai said Afghan officials were investigating the U.N. attack and would bring the perpetrators to justice.

De Mistura said four Nepalese guards were killed protecting the U.N. staff and did not fire their guns.

The other three victims were identified by officials in their home countries as: Joakim Dungel, a 33-year-old Swede; Lt. Col. Siri Skare, a 53-year-old female pilot from Norway; and Filaret Motco, a 43-year-old Romanian who worked in the political section of the U.N.

The U.N. envoy said the Russian mission chief, who spoke Dari, was beaten but let go after he told the attackers he was Muslim.

According to de Mistura, a group of seven to 15 insurgents had infiltrated the protest, which numbered around 3,000 people, and said some have been arrested.

"I am profoundly sad and I am also shocked by what I saw, but we do continue our work, we are not going to be deterred," De Mistura said, describing the Quran burning as "an insane gesture."

In Florida, Wayne Sapp, a pastor at the church, called the events "tragic," but said he did not regret the actions of his church.

"I in no way feel like our church is responsible for what happened," Sapp said in a telephone interview on Friday. Afghan authorities suspect insurgents melded into the mob outside the U.N. compound and they announced the arrest of more than 20 people, including a militant they suspect was the ringleader of the assault. The suspect was an insurgent from Kapisa province, a hotbed of militancy about 250 miles (400 kilometers) southeast of the city, said Rawof Taj, deputy provincial police chief.

Taliban spokesman Zabiullah Mujahid sent a text message to The Associated Press on Saturday denying that the insurgency was responsible for killing the U.N. workers.

Demonstrators have alleged that the four protesters were killed by Afghan security forces.

Interior Ministry spokesman Zemeri Bashary said Saturday that a delegation of high-ranking Afghan officials was being sent to the city to investigate what happened.

Bashary also gave reporters details of Saturday's attack on NATO's Camp Phoenix, a base on the east side of Kabul that's used to train Afghan security forces.

He said three armed insurgents wearing suicide bomb vests arrived at a main gate at the base around 6:45 a.m. Two of the attackers opened fire and then detonated their vests of explosives, Bashary said. The third opened fire and was killed by NATO forces. The body of a fourth person, an Afghan man at the scene, has not been identified. Three NATO service members were injured, the coalition said.

The gate at the base was scorched from the explosions. An AP reporter at the scene saw the remains of at least one of the attackers dangling from the gate.

Associated Press writers Deb Riechmann in Kabul and Mirwais Khan in Kandahar contributed to this report.