"Camelot" and "The Borgias" are not your mother's prestige projects. But one of them makes for great TV 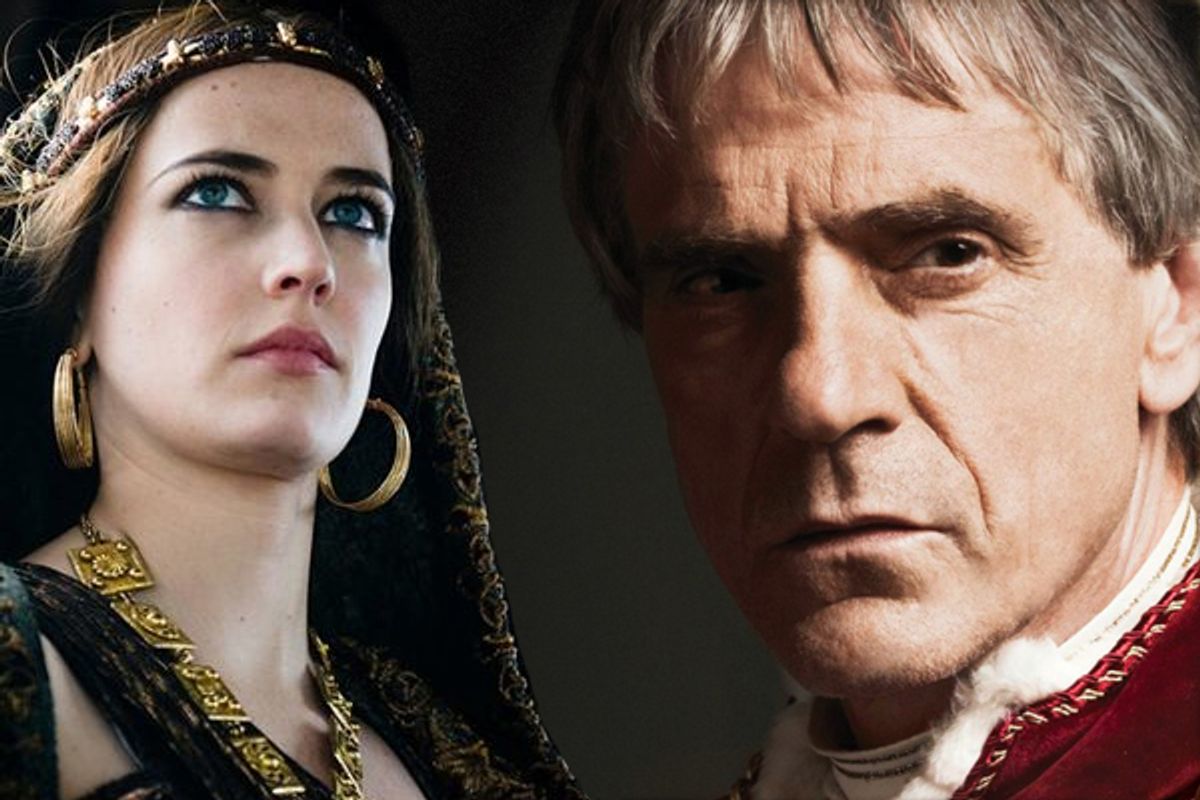 Once upon a time, the phrase "costume drama" conjured images of ornate throne rooms and garbed, bored-looking royals telling servants, "Leave us!"  At some point -- probably the '60s  -- filmmakers started to mess with the template, keeping the lush costumes and intricate social rituals while adding ever-more-generous dollops of sex and violence.  You still see queens telling servants, "Leave us," but now they're likely to to be naked and holding a severed head. The new cable series "Camelot" and "The Borgias" carry on in this tradition, offering pomp and sin in equal measure; they're parchment scrolls dipped in blood.

Worse things first: "Camelot" (which debuted Friday on Starz) is a take on the Arthurian legends with little interest in honor or poetry. It's mainly about intrigue -- who's setting up whom for exile or assassination, who's sleeping with whose significant other. Publicity material cautions, "Forget everything you think you know: This is the story of Camelot that has never been told before." Which presumably explains why the future sorceress Morgan LeFay (Eva Green)  and the future King Arthur (Jamie Campbell Bower) are going at each other like Superman and Lex Luthor.

Created by Michael Hirst ("The Tudors"), the series is handsomely lit but filmed in that wobbly, run-and-gun style that's too common in modern TV. The filmmaking doesn't give you much chance to appreciate the costumes and sets, which might be the point; the production looks rather basic cable-y. (When the good guys pause to stare at Arthur's future headquarters and exclaim, "Camelot!" I expected one of them to mumble, "It's only a model.") The only real bright spots are Green -- a fiery actress who has the young Elizabeth Taylor's violet eyes, and the sort of figure that robs men of their ability to pronounce consonants -- and "Shakespeare in Love" star Joseph Fiennes, who plays the most laid-back Merlin I've seen.

Merlin, of course, is responsible for the existence of Morgan's half-brother, Arthur. Almost 20 years before the start of this tale, he helped Arthur's dad seduce Arthur's married mother, Igraine (Claire Forlani), by assuming the likeness of her husband. Then he spirited the newborn away. Merlin goes back and forth on whether this was a good idea. Sometimes he describes it as if it were one step in a grand, noble plan to unite the kingdom under the rule of Luke Skywalker ... er, Neo ... sorry, Arthur. Other times he sounds like he knows he messed up, and is mentoring Arthur to right the cosmic scales.

"Camelot" teeters on the edge of camp, but it doesn't have the nerve to pitch itself into the abyss and just be trashy (like Starz's "Spartacus" series, a collection of swordfights and sex scenes interrupted by conversations). When Morgan seduces King Lot (James Purefoy) to win him as an ally against her stepmother, their tryst is so intense it goes beyond parody and verges on "Are they kidding?  "I pledge fealty to you!" he shouts, plowing her; "I pledge fealty to you!" she shrieks, ripping bloody nail marks across his chest.  If all of "Camelot" were played at this pitch it might have been dumb fun. Mostly it's dumb.

"The Borgias" (Showtime, Sundays 9 p.m./8 Central, starting April 3) is vastly superior. Given how it was promoted -- as "The Tudors" in papal robes -- I expected it to be yet another R-rated historical soap with an overqualified cast. It's that. (The series is co-executive produced by ... wait a second ... Michael Hirst? Not him again!) But it's also good. And addictive -- not just because of the blood-and-boobs aspects, but because it takes you inside an unfamiliar world and shows you how it works.

The show's mastermind is Neil Jordan, the writer-director who made "The Crying Game," "Mona Lisa" and other notable films. He originally wanted to make 'The Borgias" as a feature. On first glance, the subject matter might seem an odd fit. Up till now, Jordan has shown little interest in real-world historical subjects, with the exception of the handsome but dour "Michael Collins," starring Liam Neeson as the Irish revolutionary leader; he's known as genre man with a romantic streak and a painter's eye. But if you consider the themes of many of his features, "The Borgias" starts to make sense. Jordan is an Irish Catholic whose films are often soaked in lust and guilt (especially "Interview With the Vampire," a campy bloodbath), and he's fascinated by transgression, repression and thwarted desire. What better place to address those pet subjects than within the walls of the Vatican?

The series is set during the title family's rise to power in Rome circa 1492. Borgia family patriarch Rodrigo Borgia (Jeremy Irons), a Spaniard, is one of many cardinals angling to succeed the dying Pope Innocent VIII. When he ascends to the papal throne in the series' pilot episode and is named Pope Alexander VI, the other cardinals gripe that he bought the position through bribes and political arm-twisting -- and they're right.

Rodrigo is clever and tough, but his judgment is suspect. He's supposed to be chaste, but like many men of the cloth, he's kept a not-so-secret mistress (Joanne Whalley's Vannozza dei Cattanei) long enough to have fathered and raised several children -- and within weeks of tellling his mistress/wife that they need to stop having sex because he's Pope now, he takes a second mistress (Giulia Farnese, played by Lotte Verbeek). Rodrigo's enemies have to handle this information with care, though. The Vatican ruling class is a gaggle of hypocrites; their code holds that you run afoul of the rules not by violating them, but by flaunting the violation. Rodrigo gets this, but only up to a point. When he shows his new mistress the secret tunnels under the Vatican that they'll use to meet and get their groove on, he wears a common monk's hooded robe. But by episode three, he's hanging out with his new ladyfriend in plain sight and using her as a political sounding board.

His tactical missteps pale beside his biggest liability: He's an insider with an outsider's mentality. Rodrigo's a Spaniard in an Italian profession. His attitude toward art, religion and world culture is catholic with a small "c". He once invited Spanish Jews to come live in Italy, and in the third episode, he takes in a young Muslim "heathen" prince from Constantinople. Rodrigo's openness and curiosity make him a threat to the status quo; the would-be popes who got passed over immediately set about delegitimizing him.

As if establishment ire weren't burden enough, Rodrigo has kids who are as stubborn and arrogant as he is. He wants to marry off his beautiful 14-year old daughter, Lucrezia (Holliday Grainger), to further cement his power, but he doesn't anticipate how quickly she'll become dissatisfied by a purely strategic marriage and start looking for chances to stray. His younger son, Juan (David Oakes), is a hot-tempered soldier who fights anyone who dares insult his family or his "bastard" status.

Rodrigo's eldest son, Cesare Borgia (Francois Arnaud), is a man of the cloth who always wanted to be a soldier (which creates tension between him and Juan). He serves not just as his dad's right hand in skulduggery, but as a manifestation of his id. There are points in the first few episodes where Cesare plans and executes a nasty bit of business without his dad's approval; the old man is always aghast, even though he planted the seed of the act in Cesare's head and benefits from the outcome.

Cesare's chief instrument of evil is an assassin named Micheletto (Sean Harris). He's a soft-spoken, sad-eyed young man who will commit any crime, no matter how vile, because he has such a low opinion of humanity and himself. ("I've smothered infants in their beds," he says. That's infants, plural.) Amazingly, however, Micheletto is the show's second most unnerving character; the grand prize goes to Cardinal Giuliano della Rovere, a lipless snake of a man played by Colm Feore, an actor who has cornered the market on outwardly unassuming monsters. ("We have placed the papal mitre in the hands of an ape, " he says, in a tone that most people would use for, "Coffee, two sugars.") The great Derek Jacobi has a small role as another rival cardinal, but I wouldn't get too attached to him if I were you.

"The Borgias" is grim but engrossing -- and when Irons is onscreen, with his bourbon-and-Gitanes voice and Chuck Jones face, it becomes a dark comedy about priests behaving badly. Irons plays corrupt and twisted men so vividly that we tend to remember the bad things he does and forget how funny he is while he's doing him.  In the third installment, Rodrigo tells Cesare he's getting paid 40,000 lira to house and protect their visitor from Constantinople; later on he lets slip that the prince's brother would pay ten times as much for his dead body.  "You would never..." Cesare says. "Oh, no," Rodrigo replies. "It'd be unthinkable ... I'm just telling you, the request was made."

The incongruity of men honoring God while surrounded by obscene wealth is never far from the show's mind. But the aim isn't to score smug laughs; it's to complicate our reactions when when a major character (often Rodrigo) contemplates matters of faith and seems truly engaged by them. One of the pilot's most striking images finds Rodrigo kneeling before an altar shortly after his ascension as pope. The shot itself makes a statement: The pope's face is framed by the glitzy artifacts on the altar, including a bejeweled crucifix that could have bought shoes for ten thousand peasants. Neil Jordan, who cowrote and directed the pilot, isn't content to use this image to wag a censorious finger. He stays on Rodrigo's face. There's awe and fear in his eyes. Each day this man sullies his office in a hundred different ways, but deep down, being pope means something to him; in his own horribly compromised way, he takes the job seriously. "The Borgias" has many moments like this -- moments where cynicism and irony share screen space with idealism and devotion.  The profane and the sacred: You can't have one without the other.