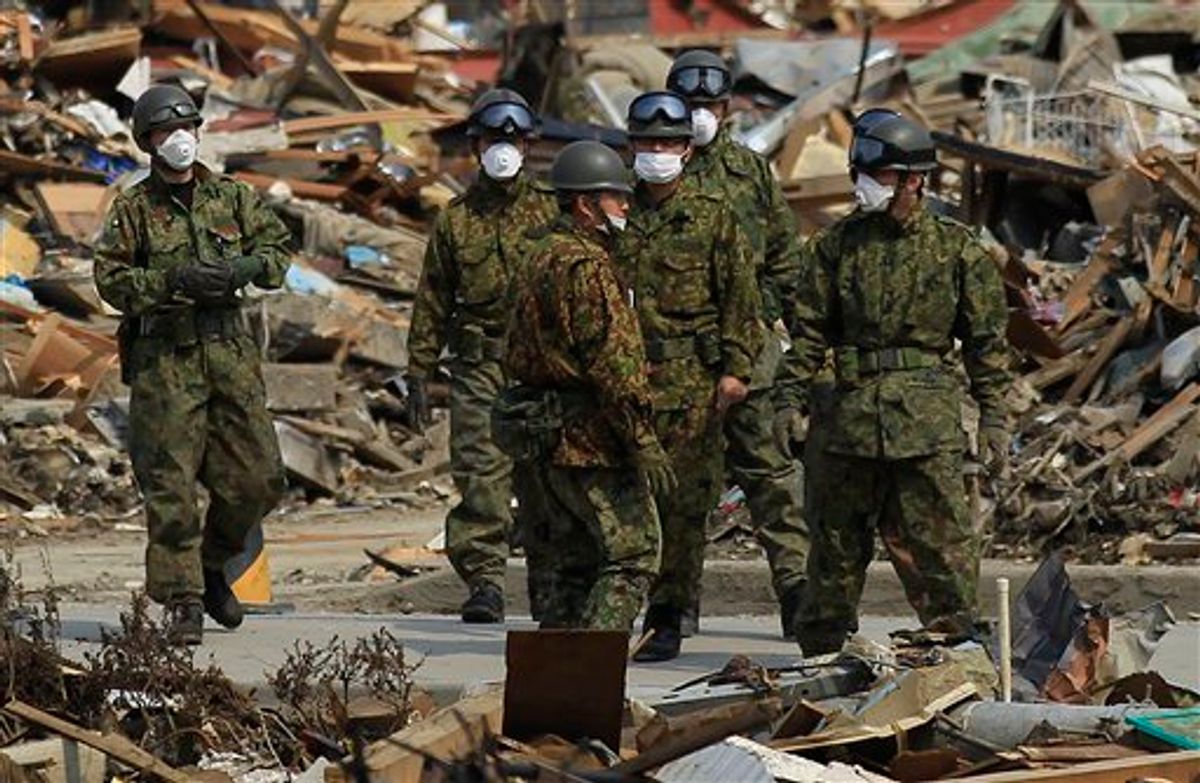 Highly radioactive water spilled into the ocean from a tsunami-damaged nuclear power plant Saturday as Japan's prime minister surveyed the damage in a town gutted by the wave.

The Fukushima Dai-ichi nuclear complex has been spewing radioactivity since March 11, when a magnitude-9.0 earthquake and ensuing wave knocked out power, disabling cooling systems and allowing radiation to seep out of the overheating reactors. Authorities said the leak they identified Saturday could be the source of radioactivity found in coastal waters in recent days.

Prime Minister Naoto Kan went to the plant and flew over the tsunami-ravaged coast soon after the wave hit, but Saturday was the first time he set foot in one of the pulverized towns.

Dressed in the blue work clothes that have become almost a uniform for officials, Kan stopped in Rikuzentakata, where the town hall is one of the few buildings still standing. All its windows are blown out and a tangle of metal and other debris is piled in front of it.

The prime minister bowed his head for a minute of silence in front of the building. He met with the town's mayor, whose 38-year-old wife was swept away in the wave and is still missing. Officials fear about 25,000 people may have been killed, many of whose bodies have not been found.

"The government fully supports you until the end," Kan later told 250 people at an elementary school that is serving as an evacuation center.

Megumi Shimanuki, whose family is living in a similar shelter 100 miles (160 kilometers) away in Natori, said Kan didn't spend enough time with people on the ground. Kan returned to Tokyo in the afternoon.

"The government has been too focused on the Fukushima power plant rather than the tsunami victims," said Shimanuki, 35. "Both deserve attention."

Saturday's leak was from a newly discovered crack in a maintenance pit on the edge of the Fukushima complex, Nuclear and Industrial Safety Agency spokesman Hidehiko Nishiyama said.

The crack was apparently caused by the quake and may have been leaking since then, said spokesman Osamu Yokokura of Tokyo Electric Power Co., which runs the plant.

Radiation quickly disperses in both air and water, and experts have said that it would be quickly diluted by the vast Pacific Ocean, where even large amounts have little effect. TEPCO is trying to pour concrete to seal the 8-inch-long (20-centimeter-long) crack, spokesman Takashi Kurita said.

"This could be one of the sources of seawater contamination," Nishiyama said. "There could be other similar cracks in the area, and we must find them as quickly as possible."

Radioactive iodine-131 at concentrations higher than the legal limit was first detected in waters off the plant more than a week ago. Readings released Saturday showed radiation in seawater had spread to 25 miles (40 kilometers) south of the plant; the concentration of iodine there was twice the legal limit, but officials stressed it was still well below levels that are dangerous to human health.

It wasn't immediately clear whether workers who have been rushing to bring the reactors under control were exposed. People living within 12 miles (20 kilometers) of the plant have been evacuated, and no fishing is taking place in the waters just off the plant.

Because of the evacuations, the plant workers have been the primary people exposed to the radiation leaks.

A worker fell into the ocean Friday while trying to board a barge carrying water to help cool the plant, the nuclear safety agency said Saturday. He was immediately plucked from the water and rinsed off, and he tested negative for skin contamination. He said he did not think he had swallowed any water, but officials are still waiting for test results to make sure he was not exposed to unsafe levels of radiation.

Another crew member described difficult conditions inside the complex in an interview published Saturday.

The plant has run out of the nylon protective booties that workers put over their shoes. Earlier, TEPCO acknowledged that the tsunami had destroyed many of the gauges used to measure radiation, forcing workers to share. More gauges have since arrived at the site.

"We only put something like plastic garbage bags you can buy at a convenience store and sealed them with masking tape," said the worker, who spoke to the national Mainichi newspaper. Such interviews have been exceedingly rare and always anonymous.

The worker also said the tsunami littered the grounds with dead fish that remained scattered throughout the plant, attracting birds.

Radiation concerns have rattled the Japanese public, already struggling to return to normal life after the earthquake-generated tsunami. Three weeks later, more than 165,000 people are living in shelters, while 260,000 households still do not have running water and 170,000 do not have electricity.

People whose houses are within the evacuation zone are growing increasingly frustrated and some have been sneaking back in. Government officials warned Friday that there were no plans to lift the evacuation order anytime soon.

After the quake, Tadashi and Ritsuko Yanai and their 1-month-old boy fled their home, which is six miles (10 kilometers) from the plant. Baby Kaon has grown accustomed to life in a shelter, but his parents haven't.

When asked if he had anything he would like to say to Kan, the 32-year-old father paused to think and then replied: "We want to go home. That's all, we just want to go home."

Thousands of families are also still awaiting news of their loved ones. More than 15,500 people are still missing.

U.S. and Japanese troops launched an all-out search of the coastline Friday for any remaining bodies in what could be their last chance to find those swept out to sea. They have found nearly 50 bodies since Friday, most floating in coastal waters. So far, 11,800 deaths have been confirmed.

Up and down the coast, helicopters, planes and boats carrying U.S. and Japanese troops scoured for the dead again Saturday.

Some bodies may have sunk and just now be resurfacing. Others may never be found.

Coast guard crews conducting similar searches rescued a dog Friday that was drifting on a rooftop. It took several hours to grab the dog because it initially scampered across other floating wreckage as crews winched down from a helicopter. It was unclear how long the dog had been at sea.