Labor pains and the GOP 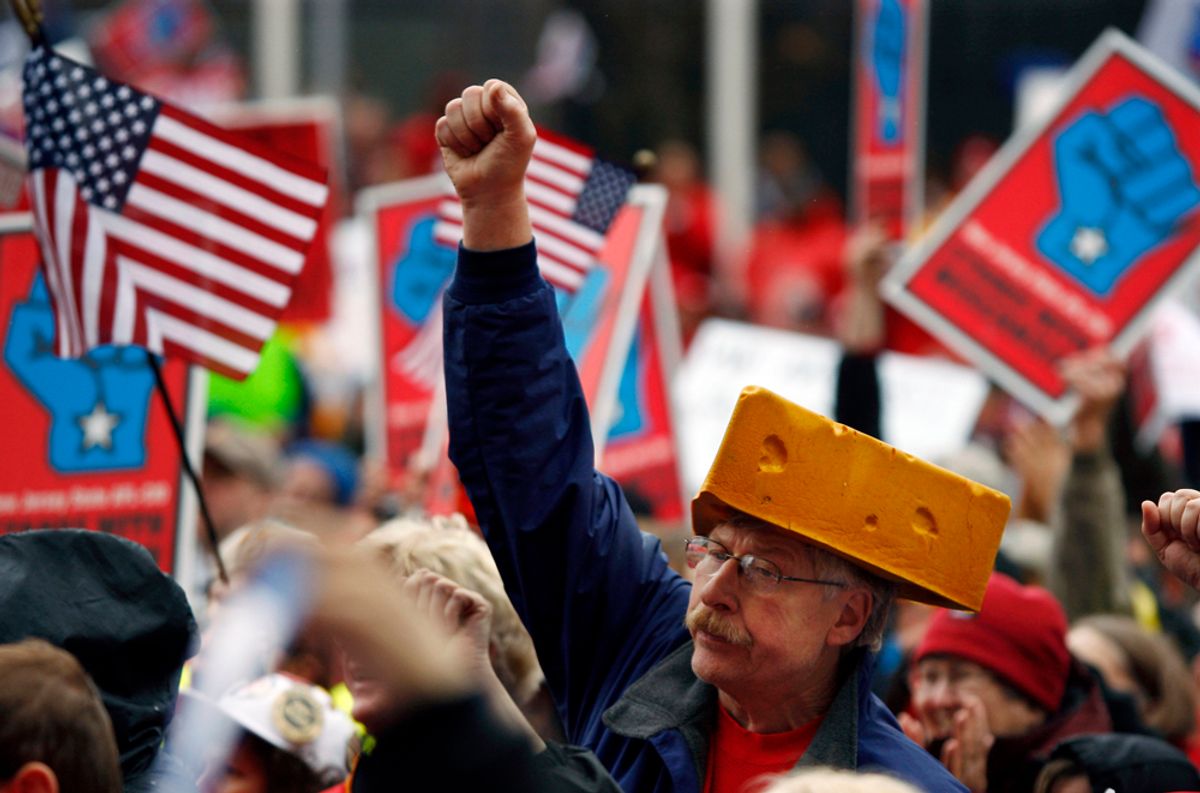 A man wears a cheese-wedge-hat as he pumps his fist in the air outside New Jersey's Statehouse in Trenton, N.J., Friday, Feb. 25, 2011, while people wave signs and shout as labor unions and supporters rally in support of Wisconsin workers locked in a battle over collective bargaining rights. Wisconsin state workers protesting a move by Gov. Scott Walker to severely curtail their collective bargaining rights have found allies in New Jersey. (AP Photo/Mel Evans) (Mel Evans)
--

There's a joke making the rounds and it goes like this: Big Business, a Tea Partier and Organized Labor are sitting around a table. A dozen cookies arrive on a plate. Big Business takes 11 of them and says to the Tea Partier, "Pssst! That union guy is trying to steal your cookie!"

Radical Islam and global terrorism may have replaced World Communism and the Cold War as the threats lurking under every bed and behind each closet door, but organized labor is the conservative bugbear that keeps on giving, no matter which international conspiracy is busily undermining the republic. (Although if the right and the corporate interests behind it could somehow link unions to creeping sharia law, Christmas would come early for those guys -- on several different levels of metaphor.)

The fact remains that labor is nowhere near the nefarious force of iniquity they would have you think it is. And I say this not only as the mild-mannered president of an AFL-CIO affiliated union but also as someone who regularly attends labor-management negotiations that by comparison would make the deliberations of the Bureau of Weights and Measures seem like Chicago in the Roaring Twenties.

Nonetheless, Republican governors, state legislatures and members of Congress are applying the screws, screaming bloody murder at unions -- especially public employee unions -- while continuing to tout bigger corporate tax breaks and looking the other way as Wall Street profiteers rake it in, stealing our collective cookies.

When Barack Obama became president and with Democrats in the majority in Congress, union leaders thought that if nothing else, passage of their long-dreamed of EFCA -- the Employee Free Choice Act, easing the way forward for workers' unionization -- was pretty much a sure thing, the quid pro quo for labor's massive electoral support. Instead, not only have EFCA's chances -- for the immediate future at least -- vanished, but labor has become the GOP's most prominent target -- especially when noisome Muslim clerics aren't readily at hand.

The progressive website ThinkProgress declared, "The defining political story three months into 2011 is the spread of anti-union legislation in the states" and last month reported that "pivoting off the myth that public employees are getting paid more than their private sector counterparts, governors and state legislatures are scapegoating public workers for their states' respective budget woes." We've seen it across the country, from Alaska, Wisconsin and Ohio -- where Gov. John Kasich signed anti-union legislation Thursday night -- to New Jersey and Maine.

The website notes that on the federal level at least, according to data from the U.S. Office of Personnel Management, public employees "actually earn 22 percent less than comparable private sector workers. Research by Harvard economist George Borjas shows that, at the top-end, private sector pay is so much better that the public sector has 'found it increasingly more difficult to attract and retain high-skill workers.'"

Yet Republican Jim DeMint of South Carolina, the C. Montgomery Burns of the United States Senate, told ThinkProgress that he "doesn't believe collective bargaining has any place in government ... including at the federal level." And on Friday, the House passed an amendment to the Federal Aviation Administration reauthorization bill that would reverse an earlier National Mediation Board (NMB) decision allowing majority rule when aviation and railway workers vote on union representation.

The amendment would count workers who choose not to vote as a "no" against the union. In the words of Washington Monthly's Steve Benen, "This may sound complicated, but it's pretty straightforward -- under the status quo, the workers would get together and hold a vote. The majority wins. Under the Republican idea, workers who don't participate in the vote would be counted as 'no' votes."

The White House is threatening a veto of this blatant union-busting, and the Communications Workers of America (CWA) issued a report noting that "If congressional elections proceeded under the proposed rules for the NMB elections, in which non-participants were counted as votes for the opponent, then none of the current Members of Congress would have won election in 2010." (emphasis mine)

Further, not content with roiling the legislative waters, Republicans have extended their attacks on labor into the groves of academe and even decorative art. In Wisconsin, where Gov. Scott Walker finally obeyed judicial demands that he suspend that state's controversial new law undermining public employee unions, the Republican Party has demanded to see the university email records of University of Wisconsin Professor William Cronon, the incoming president of the American Historical Association who just happened to write blog entries and a New York Times op-ed piece critical of Walker's anti-union tactics.

In Michigan, a conservative think tank, the Mackinac Center for Public Policy, funded in part by the Walton Family (as in Wal-Mart) and the ubiquitous Koch brothers, is seeking from the labor relations departments at three in-state universities any and all emails that mention anything having to do with the union fight in neighboring Wisconsin, Gov. Walker or -- wait for it -- Rachel Maddow.

Meanwhile, in the great state of Maine, Tea Party Gov. Paul LePage is taking heat for removing an 11-panel mural depicting labor history from the walls at, of all places, the state's Department of Labor. His office said it had received a complaint comparing the work to North Korean propaganda. LePage also said he wants to change the titles of conference rooms there named after Cesar Chavez and New Deal Labor Secretary Frances Perkins. A spokesman told a local paper that "the message from state agencies needs to be balanced" and that the rooms could be renamed "after mountains ... or something."

Hey, in that case, if not mountains, how about "Joe Hill?"

So none of this is truly about slashing deficits and balancing budgets. We know it's really about smashing labor and its protections, undermining the Democratic Party further and trying to torpedo Obama's reelection. In a fundraising letter, Wisconsin State Senate Majority Leader Scott Fitzgerald bragged that their goal had been not budget repairs but "to break the power of unions ... once and for all." And in an interview with the effervescent Megyn Kelly of Fox News, Fitzgerald said, "If we win this battle, and the money is not there under the auspices of the unions, certainly what you're going to find is President Obama is going to have a much more difficult time getting elected and winning the state of Wisconsin."

It's also about ignoring the advances labor has brought the middle class and using charges of union corruption and financial excess to divert attention from the real culprits. According to Friday's edition of USA Today, "The heads of the nation's top companies got the biggest raises in recent memory last year after taking a hiatus during the recession" -- a catastrophe many of them helped create.

"At a time most employees can barely remember their last substantial raise, median CEO pay jumped 27% in 2010 as the executives' compensation started working its way back to prerecession levels, a USA Today analysis of data from GovernanceMetrics International found ...

"The sizable pay hikes came even though the economy's recovery remains frail, unemployment is high and corporate profits last year were roughly flat, up 1.5%, from where they were in 2007 when the stock market peaked."

The raises are based not on growth or the creation of business but on money saved from cutbacks and layoffs. And, as the economist John Kenneth Galbraith wrote in 1980, "The salary of the chief executive of the large corporation is not a market award for achievement. It is frequently in the nature of a warm personal gesture by the individual to himself."

Luckily, such news combined with pushback from labor and the public's angry reaction to Republican overreaching could boomerang.

The next sound you hear may be all their cookies crumbling.