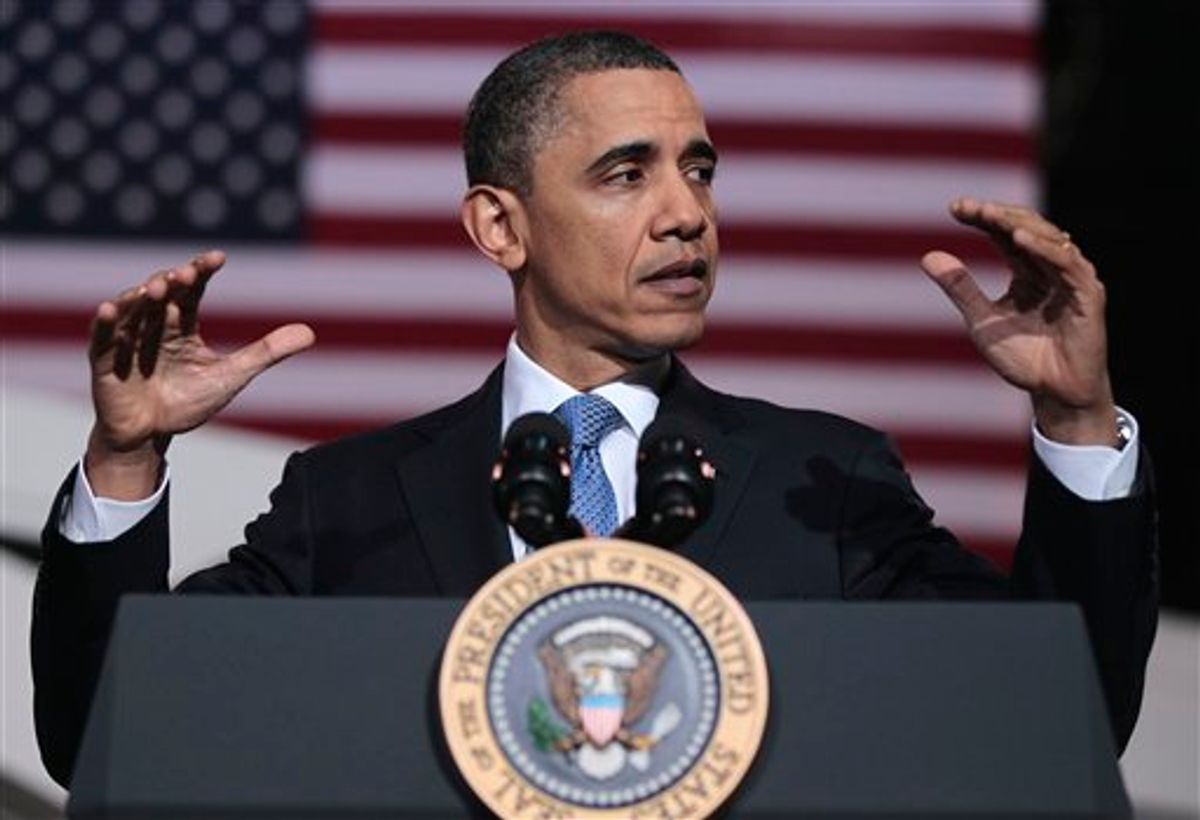 A bullish President Barack Obama said Friday that compromise is close with Republicans on $33 billion in budget cuts, and he warned that without a deal the ensuing government shutdown would "jeopardize our economic recovery" just as jobs are finally being created.

Despite his assessment, negotiators reported little progress, Senate Democrats backtracked on a key concession from earlier in the week and Congress' top Republican sounded less optimistic than the president that a breakthrough was imminent.

"There is no number. There is no agreement on a number" on how much to cut, insisted House Speaker John Boehner, who is under pressure from tea party-backed conservatives not to give too much ground. Still, he added, "I am not preparing for a government shutdown."

Funding for the government expires next Friday at midnight, and without action by Congress, a partial shutdown would follow.

The day's events occurred against a backdrop of unusually upbeat news about the economy, which is still recovering from the worst recession since the Great Depression. The Labor Department reported that companies added 216,000 jobs last month and the unemployment rate fell slightly to 8.8 percent.

Nearly six weeks after the House passed a bill calling for $61 billion in cuts, it appeared the endgame was at hand in the first of what is expected to be a series of political battles over the size and scope of government.

"We will be working through the weekend to forge a compromise," said Senate Majority Leader Harry Reid, D-Nev. At Republican insistence, Congress has already cut $10 billion in spending as part of a pair of stopgap spending bills to keep the government open for business.

While another short-term bill has not been ruled out, Obama, Boehner, Reid and others have said they would prefer to complete work on a six-month bill to close out the budget year.

Already, Republicans are looking ahead to unveiling a 2012 budget next week, after weighing privately whether to delay so they could focus all of their attention on the current clash.

Administration officials have been heavily involved in the negotiations on the spending bill, but the president struck something of an above-the-fray note on Friday.

"Given the encouraging news we received today on jobs, it would be the height of irresponsibility to halt our economic momentum because of the same old Washington politics," he said.

"It can't be 'my way or the highway politics,' said the president, who has sought in recent months to recapture the support of independents who helped elect him in 20008 but defected to the Republicans in last fall's elections.

"We know that a compromise is within reach. And we also know that if these budget negotiations break down, it could shut down the government and jeopardize our economic recovery."

Shortly before Obama spoke, Reid shifted the Democrats' position on one key element of the talks, in apparent deference to environmentalists angered by an earlier concession.

"Neither the White House or the Senate leaders is going to accept any EPA riders," he said in a conference call with reporters.

House Republicans included provisions in their $61 billion package of spending cuts that would block the EPA from implementing regulations on a variety of industries.

Democratic officials indicated earlier in the week some of them would be incorporated into any agreement as part of a deal under which Republicans would agree to accept total cuts less than $61 billion.

In response to Reid's statement, Kevin Smith, a spokesman for Boehner, said, "If they are taking EPA riders off the table, then we're certainly not 'close' to a deal."

In fact, it appeared the two sides had agreed to little, except that they would assemble a framework to cut $33 billion from current spending levels.

The original House measure would cut $61 billion from domestic accounts, including administration priorities such as education and infrastructure.

Senate Democrats and the White House have proposed adding defense cuts to the bill in an attempt to reduce the burden on domestic programs. Boehner declined at his news conference to say whether that was acceptable to him.

The speaker has assumed an increasingly public role in the past week, making numerous appearances before television cameras to stress that Republicans want to cut spending but do not favor a government shutdown.

In doing so, he has spent part of his time countering Democratic accusations, but he also has sought to maintain his ability to compromise in the light of tea party demands.

At a news conference during the day, Rep. Paul Broun, R-Ga., said any bill with less than $61 billion was an insult, and he vowed to vote against it.

But a half dozen or more other Republicans, most of them first-termers, declined to follow his lead, making it clear that they are prepared to accept some sort of compromise.

Another first-term Republican, Rep. Tim Scott, R-S.C., said "The further you get from $61 billion, the less likely" he and the other 86 freshmen Republicans are to support a deal.

But he, like others, declined to say what sort of compromise he was ready to vote for.