Why I have to legally adopt my own son

As lesbian parents, my wife and I are forced to jump through some strange hoops. This is definitely one of them 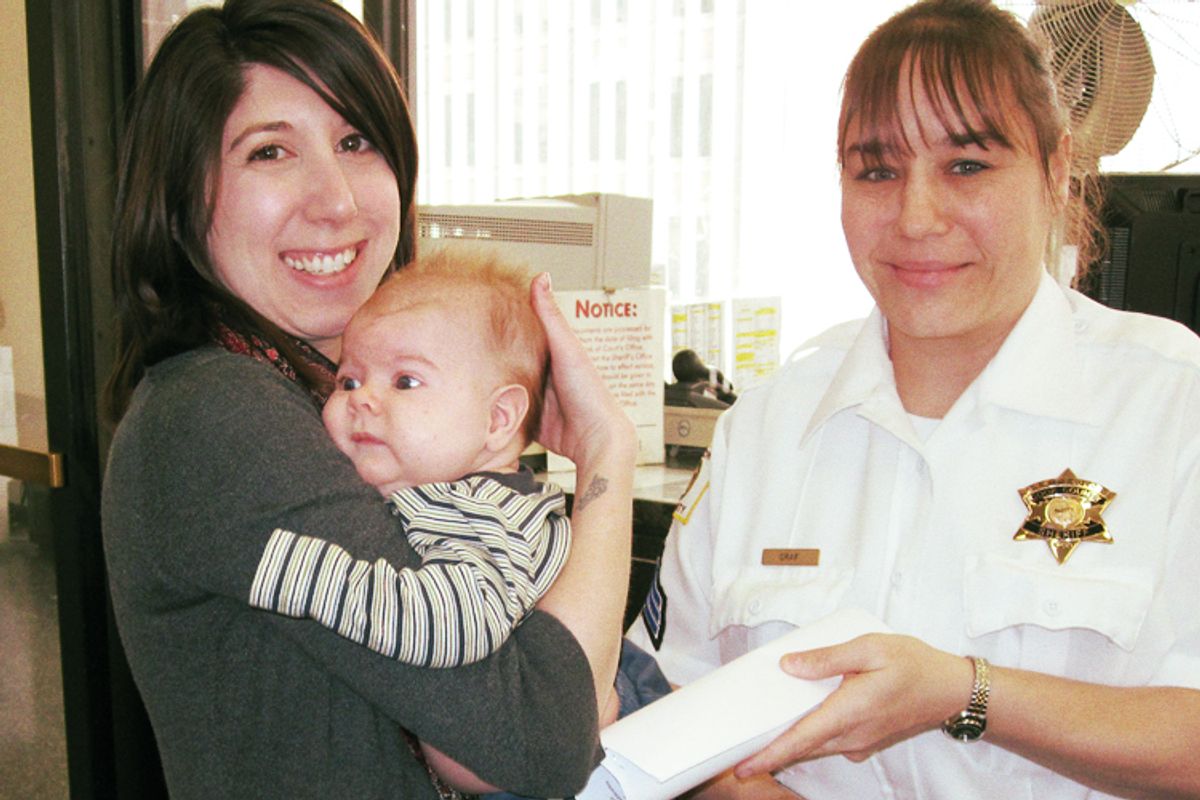 The author's wife and son with a sheriff's officer
--

I woke up that morning, thoughts racing, at 2:30 and again at 4:30. When I rolled out of bed at 6:00, I'd already been awake for hours, running through various judicial mishaps in my head. I drank less coffee than usual to avoid the jitters. I left for the Cook County courthouse 30 minutes earlier than necessary. Since I've been litigating family law cases for about five years now, I don't usually get this nervous before court. But that morning was different. That morning, I was the litigant.

Luckily, it's nothing serious. In fact, I wanted to file this case. Everyone else is delighted for us, but my wife, Ann, and I are just gritting our teeth until it's over. We can't help worrying that something will go dreadfully wrong, even though we're certain to get what we want in the end. But it's impossible to avoid white-knuckled anxiety when the stakes are so high: I'm petitioning the court to adopt my own son.

In addition to being terrified, I was overwhelmingly annoyed. I shouldn't have to do this. My wife conceived our son, Julian, through artificial insemination by an anonymous sperm donor. If I were a man, I'd be the legal father already. No one would have cross-examined me or performed a DNA test before allowing me to sign the forms for his birth certificate. But I'm not a man, so Ann and I can't get legally married and Julian is not considered my legal son. I have to go through the adoption process as if I were a stepparent, or relative caring for a neglected child. As if I hadn't married his mother almost five years before he was born. As if I hadn't woken in the middle of the night to his tiny feet kicking me from underneath my wife's skin. As if I hadn't been the first one to see his pinched, purple-lipped face emerging into the world, or the one who cut through the gristle of the cord that still bound his bloodstream to my wife's.

I should be grateful for this opportunity. And in truth, I was happier about it just a few short months ago, knowing that I came very close to not being able to adopt Julian at all. Ann and I moved to New Orleans in 2009. We'd briefly lived in NOLA before Hurricane Katrina, but evacuated to and eventually stayed in my hometown, Chicago. Ann, a California native, couldn't take the idea of a lifetime of frigid winters. I promised her that we could go back to Louisiana after she finished law school. Though I was apprehensive about the move, I was also exited: We'd both managed to land interesting jobs in a unique city where we thought we'd start our life together in earnest. I was 28 years old and not yet comfortable with a fully adult identity. I still had a taste for adventure, which is what New Orleans most resembled from the outside looking in. I imagined nights drinking beer on the bayou until the stars faded and gave way to dawn. I fantasized about winning federal civil rights lawsuits by day and crawling the jazz bars by night.

Once we settled in, our social life was anything but adventurous. Like any good modern lesbian couple, we bought a house, moved in with our two cats, and shortly thereafter invested $6,000 in premium-quality frozen sperm with which to impregnate Ann. It took the doctor one try. Thus, our son was conceived in Louisiana, a state so hostile toward gay families that even a years-long lawsuit and multiple court orders aren't enough to get them to change a birth certificate to reflect the child's legal adoptive fathers. As a family law lawyer, I should have known better than to start a family there. But Ann loved New Orleans, and I loved Ann, and love makes the world go round, right?

But we had to rethink our long-term strategy once The Baby was no longer a fantasy. After Ann got pregnant, the signs popped up everywhere -- and they all read "Run While You Still Can." I heard a terrifying story at work about potential clients, two moms, whose kids were temporarily placed in foster care, probably because a child protection worker didn't like lesbians. The Louisiana Legislature handily killed a bill to legalize second-parent adoption for same-sex couples. To the east, the North Carolina Supreme Court voided all second-parent adoptions performed in the state. This move was especially terrifying. Neither North Carolina's nor Louisiana's law technically allows for same-sex parents to adopt a child together, but judges in more liberal areas of the states have been performing them anyway for years, waiving the parts of the adoption law that conflict with the situation. If North Carolina's highest court could so callously reach back in time to undo all those adoptions, so too could Louisiana's.

We heeded the warnings. In about three months' time, we sold our house and made arrangements to return to Illinois, where the law has allowed second-parent adoptions for years. We couldn't even let Julian be born in Louisiana, because we knew we'd never be able to get a proper birth certificate. It almost happened anyway: He was born three weeks before his due date, just 10 days after we crossed the Illinois state line.

As if to save us from any lingering love we had for New Orleans, Illinois called us home by passing a civil unions law that goes into effect on June 1, 2011. Because of that law, our next baby will have both of our names on the original birth certificate. I tried to think about that on that morning as I cycled through the oddities of the adoption process, the needless and somewhat intrusive formality of it. I even managed to rouse a smile at the sheer absurdity of this morning's strangest moment, which was the service of process upon our 11-week-old son. A sheriff's officer, grinning as if she'd won the coin toss, stepped out from behind the faux granite counter and touched our adoption petition to Julian's chubby thigh. He was then deemed served. I snapped a picture of the three of them, my wife and baby and the happiest sheriff's officer in Chicago. I want to remember this when it's all a relic.

Leslie Fenton is an attorney in Chicago. She and her wife will open their new family law firm, Fenton & Fenton, LLC, in May 2011.